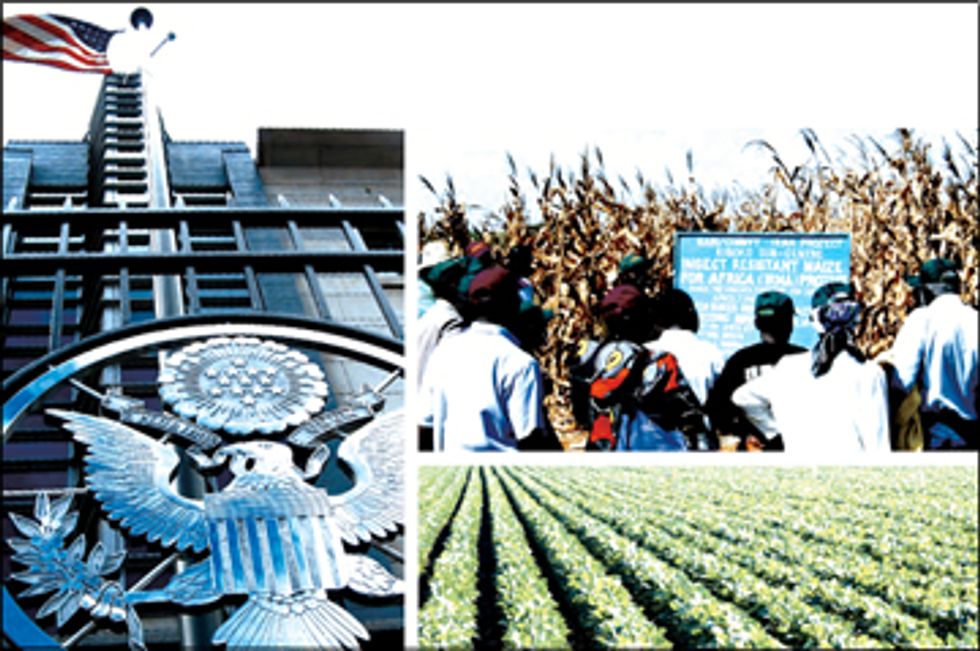 “The U.S. Department of State is selling seeds instead of democracy,” said Wenonah Hauter, executive director of Food & Water Watch. “This report provides a chilling snapshot of how a handful of giant biotechnology companies are unduly influencing U.S. foreign policy and undermining our diplomatic efforts to promote security, international development and transparency worldwide. This report is a call to action for Americans because public policy should not be for sale to the highest bidder.”

“An overwhelming number of farmers in the developing world reject biotech crops as a path to sustainable agricultural development or food sovereignty," said Ben Burkett, president of the National Family Farm Coalition, a U.S. member of the international peasant farmer organization, La Via Campesina. "The biotech agriculture model using costly seeds and agrichemicals forces farmers onto a debt treadmill that is neither economically nor environmentally viable.”

The State Department’s efforts impose the policy objectives of the largest biotech seed companies on often skeptical or resistant governments and their citizens, and exemplifies thinly veiled corporate diplomacy. Of the 926 diplomatic cables analyzed, seven percent mention specific biotech companies and six percent mention Monsanto specifically. The State Department promoted the commercialization of specific seeds, acted to quash public criticism of particular companies and facilitated negotiations between foreign governments and seed companies like Monsanto over issues like patents and intellectual property. This corporate diplomacy was nearly twice as common as diplomatic efforts on food aid, which was mentioned in only four percent of the cables.

“It’s not surprising that Monsanto, DuPont, Syngenta, Bayer and Dow want to maintain and expand their control of the $15 billion global biotech seed market, but it’s appalling that the State Department is complicit in supporting their goals despite public and government opposition in several countries,” said Ronnie Cummins, executive director of Organic Consumers Association. “American taxpayer’s money should not be spent advancing the goals of a few giant biotech companies.”

Food & Water Watch’s report delineates the State Department’s charm offensive to promote biotech crops and pro-biotech policies, often in close collaboration with the biotech seed companies. The report provides a detailed account of the State Department’s participation at nearly 170 agricultural biotech conferences and events, sponsorship or coordination of 17 junkets for journalists and opinion-makers, and other ways that the agency uses its diplomatic prestige and bully pulpit to pressure foreign governments to adopt pro-biotechnology policies and products.

“This report provides yet another distressing example of how Monsanto and its ilk have a stranglehold over the global food supply and how it does everything it can—including influence U.S. diplomacy—to silence people who only want to make informed choices about the food they feed their families,” said Pamm Larry, a leader of the U.S. national grassroots movement to label GE foods and the initial instigator of Proposition 37, a California ballot initiative to label genetically engineered foods that was narrowly defeated at the polls last November. “As we fight for the mandatory labeling of GE foods here in the U.S., it’s important that we also shed light on the ways that the pro-GE seed agenda is being forced upon other countries—because knowledge is power.”

“The State Department should not be flexing its diplomatic muscle to impose biotech crops on the developing world,” said Hauter. “Today, the U.S. government is secretly negotiating major trade deals with Europe and the countries of the Pacific Rim that would force skeptical and unwilling countries to accept biotech imports, commercialize biotech crops and prevent the labeling of GE foods. This madness must stop; the U.S. government should not be a shill for the largest biotech seed companies.”

The report concludes with the recommendation that all countries should have the right to establish their own acceptance of biotech crops and foods free from U.S. interference, and suggests how the State Department should approach agricultural development to put the interests of other countries before the interests of the biotech seed companies.