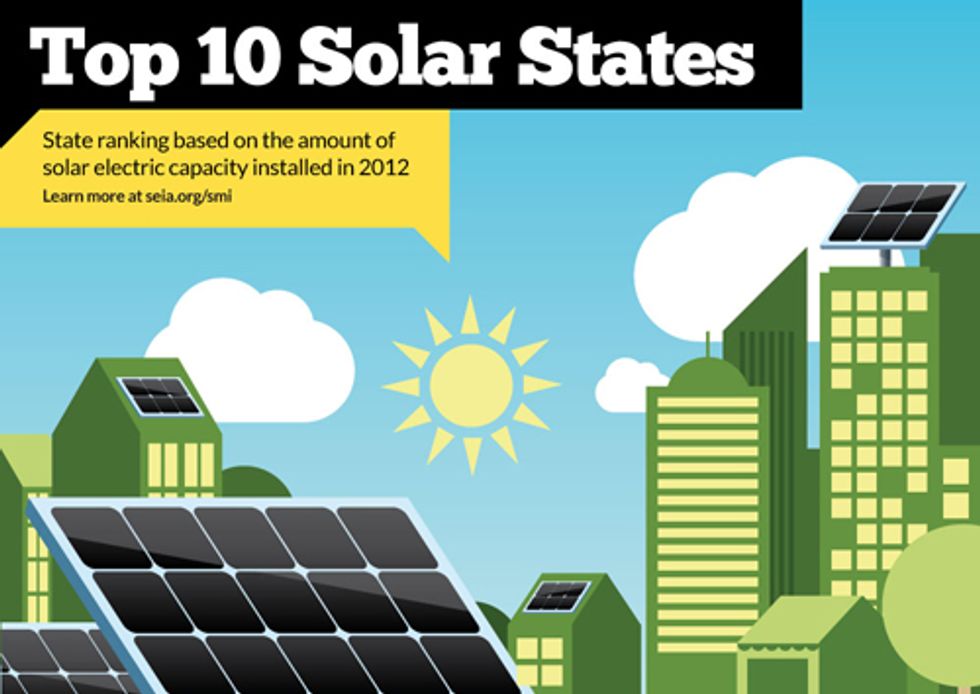 With another record-breaking year, solar is the fastest growing energy source in the U.S., powering homes, businesses and utility grids across the nation. The Solar Market Insight annual edition shows the U.S. installed 3,313 megawatts (MW) of solar photovoltaics (PV) in 2012, a record for the industry. Perhaps most importantly, clean, reliable, affordable solar is continuing a major growth pattern that has made it a leading source of new electricity for America that’s increasingly competitive with conventional electricity across dozens of states today.

Even with the cost of solar falling for consumers, the market size of the U.S. solar industry grew 34 percent from $8.6 billion in 2011 to $11.5 billion in 2012—not counting billions of dollars in other economic benefits across states and communities. As of the end of 2012, there were 7,221 MW of PV and 546 MW of concentrating solar power (CSP) online in the U.S.—enough to power 1.2 million homes.

At the state level, 2012 was another year for breaking records. California became the first state to install more than 1,000 MW in one year, with growth across all market segments. Arizona came in as the second largest market, led by large-scale utility installations, while New Jersey experienced growth in the state’s non-residential market.

In addition to record annual installations, the fourth quarter (Q4) of 2012 shattered all-time quarterly records as well, with 1,300 MW of installed PV, besting the previous high by a whopping 64 percent. The residential and utility segments had their best quarters ever, installing 144 MW and 874 MW respectively.

“2012 was a busy year in the U.S. solar market,” said Shayle Kann, vice president at GTM Research. “The market value of U.S. solar installations reached $11.5 billion in 2012, up from just $3.6 billion in 2009. Amidst this boom, the industry faced newly-imposed import tariffs on Chinese solar cells and ongoing consolidation in the manufacturing space. In 2013, we expect another strong year, driven in part by new mechanisms to increase the availability, and lower the cost, of solar project financing.”

The residential market saw meaningful growth in California, Arizona, Hawaii, Massachusetts and New York, as average residential system prices dropped nearly 20 percent in one year–from $6.16 per watt in Q4 2011 to $5.04 per watt in Q4 2012. SEIA and GTM Research expect residential solar to surge in 2013 and beyond, as third-party solar financing options spread across the country.

Meanwhile, the utility market continues to be dominated by installations in the desert southwest. There were 152 utility solar installations in 2012, and eight of the ten largest projects currently in operation were completed in 2012. These installations represented 54 percent of total installed capacity, or 1,782 MW.

“There were 16 million solar panels installed in the U.S. last year–more than two panels per second of the work day–and every one of these panels was bolted down by a member of the U.S. workforce,” said Rhone Resch, president and CEO of SEIA. “We’ve brought more new solar online in 2012 than in the three prior years combined. This sustained growth is enabling the solar industry to create thousands of good jobs and to provide clean, affordable energy for more families, businesses, utilities and the military than ever before. This growth simply would not have occurred without consistent, long-term policies that have helped to ensure a stable business environment for this country’s 5,600 solar companies–many of them small businesses.”

SEIA and GTM Research expect the growth to continue into 2013 and beyond. For this year, the report forecasts 4,300 MW of new PV installations, up 29 percent over 2012, and 946 MW of concentrating solar power. Over the next four years, the residential and non-residential markets are expected to gain market share as system prices decline, the industry becomes even more efficient, and new financing channels arise. “All of these data point to solar having turned the corner,” added Resch. “Solar is an affordable option for homes and businesses today, and is well on its way to becoming a substantial part of America’s energy portfolio.”