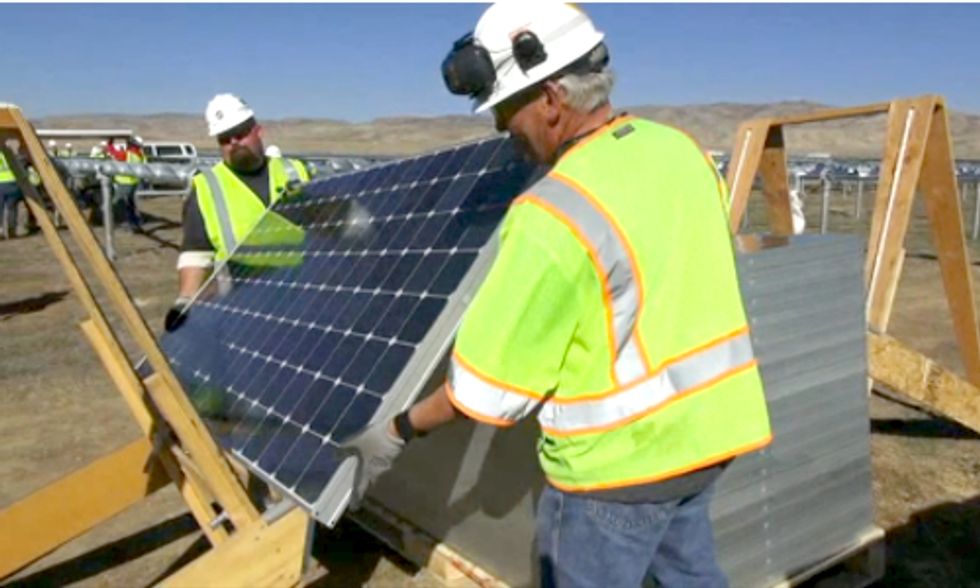 As the generation of solar energy grows, so does the industry's employment base.

According to the fourth annual National Solar Jobs report released today by The Solar Foundation (TSF), an independent nonprofit solar energy research and education organization, the solar industry added 23,682 jobs from September 2012 to September 2013. Solar employment grew by 20 percent during that period.

“The solar industry’s job-creating power is clear,” Andrea Luecke, executive director and president of The Solar Foundation, said in a statement. “The industry has grown an astounding 53 percent in the last four years alone, adding nearly 50,000 jobs. Our Census findings show that for the fourth year running, solar jobs remain well-paid and attract highly-skilled workers.

"That growth is putting people back to work and helping local economies.”

TSF predicts the addition of more than 22,000 jobs this year. Nearly 70 percent of the nation's solar jobs in 2013 were installation or manufacturing positions.

The jobs in the “Other” category include workers at nonprofits, the government, and academia.

“The solar industry is a proven job-creator," said Bill Ritter, former governor of Colorado and director of the Center for the New Energy Economy at Colorado State University.

“In Colorado and across the country, we have seen that when the right policies are in place to create long-term market certainty, this industry continues to add jobs to our economy.”

TSF, BW Research Partnership and the GW Solar Institute spoke to thousands of solar firms around the country. For example, SolarCity added more than 2,000 U.S. jobs since the beginning of 2013, CEO Lyndon Rive said. Meanwhile the 400 dealers in SunPower's network employ more than 6,000 people across the U.S., with two major solar power plants the company deals with createing 1,300 jobs, CEO Tom Werner said.

"When you install a solar panel you create a local job that can’t be outsourced,” Rive said. “More than 90 percent of Americans believe we should be using more solar, and fewer than 1 percent have it today.

"We’ve barely begun this transformation, but as it advances, the American solar industry has the potential to be one of the greatest job creators this country has ever seen.”