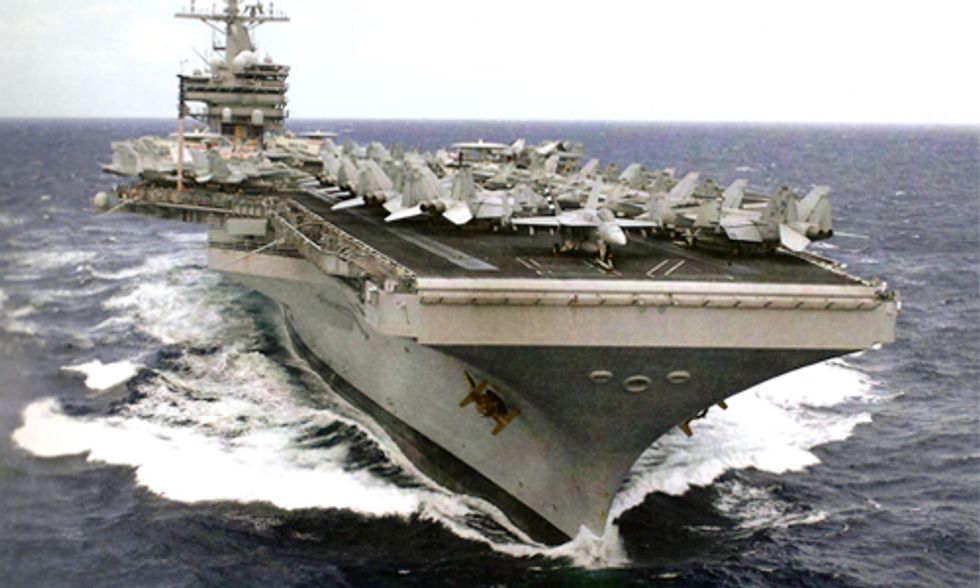 The suit includes an infant born with a genetic condition to a sailor who served on the USS Ronald Reagan as radiation poured over it during the Fukushima melt-downs, and an American teenager living near the stricken site. It has also been left open for “up to 70,000 U.S. citizens [who were] potentially affected by the radiation and will be able to join the class action suit.”

Now docked in San Diego, the USS Reagan’s on-going safety has become a political hot potato. The $4.3 billion carrier is at the core of the U.S. Naval presence in the Pacific. Critics say it’s too radioactive to operate or to scrap, and that it should be sunk, as were a number of U.S. ships contaminated by atmospheric Bomb tests in the South Pacific.

The re-filing comes as Tepco admits that it has underestimated certain radiation readings by a factor of five. And as eight more thyroid cancers have surfaced among children in the downwind region. Two new earthquakes have also struck near the Fukushima site.

The amended action was filed in federal court in San Diego on Feb. 6, which would have been Reagan's 103rd birthday. It says Tepco failed to disclose that the $4.3 billion nuclear-powered aircraft carrier was being heavily dosed from three melt-downs and four explosions at the Fukushima site. The Reagan was as close as a mile offshore as the stricken reactors poured deadly clouds of radiation into the air and ocean beginning the day after the earthquake and tsunami. It also sailed through nuclear plumes for more than five hours while about 100 miles offshore. The USS Reagan (CVN-76) is 1,092 feet long and was commissioned on July 12, 2003. The flight deck covers 4.5 acres, carries 5,500 sailors and more than 80 aircraft.

Reagan crew members reported that in the middle of a snowstorm, a cloud of warm air enveloped them with a "metallic taste." The reports parallel those from airmen who dropped the Bomb on Hiroshima, and from central Pennsylvanians downwind from Three Mile Island. Crew members drank and bathed in desalinated sea water that was heavily irradiated from Fukushima’s fallout.

As a group, the sailors comprise an especially young, healthy cross-section of people. Some also served on the amphibious assault ship Essex, missile cruiser Cowpens and several others.

The plaintiffs' ailments parallel those of downwinders irradiated at Hiroshima/Nagasaki (1945), during atmospheric Bomb tests (1946-1963), and from the radiation releases at Three Mile Island (1979) and Chernobyl (1986). Among them are reproductive problems and “illnesses such as Leukemia, ulcers, gall bladder removals, brain cancer, testicular cancer, dysfunctional uterine bleeding, thyroid illnesses, stomach ailments and a host of other complaints unusual in such young adults.”

One 22-year-old sailor declared to the court that “Upon my return from Operation Tomodachi, I began losing my eyesight. I lost all vision in my left eye and most vision in my right eye. I am unable to read street signs and am no longer able to drive. Prior to Operation Tomodachi, I had 2/20 eyesight, wore no glasses and had no corrective surgery.” Additionally, he said, “I know of no family members who have had leukemia.”

The suit asks for at least $1 billion to “advance and pay all costs and expenses for each of the Plaintiffs for medical examination, medical monitoring and treatment by physicians,” as well as for more general damages.

Both Tepco and the Navy say not enough radiation was released from Fukushima to harm the sailors or their offspring. But neither can say exactly how much radiation that might have been or where it went. The Navy has discontinued a program that might have tracked the sailors’ health in the wake of their irradiation.

After its four days offshore from Fukushima the governments of Japan, South Korea and Guam refused the Reagan port entry because of its high radiation levels. The Navy has since exposed numerous sailors in a major decontamination effort whose results are unclear.

Now docked in San Diego, the Reagan’s on-going safety has become a political hot potato. The $6 billion carrier is at the core of the U.S. Naval presence in the Pacific. Critics say it’s too radioactive to operate or to scrap, and that it should be sunk, as were a number of U.S. ships contaminated by atmospheric Bomb tests in the South Pacific. There are also rumors the Navy is considering deploying the Reagan to a port in Japan, where protests would be almost certain.

Filed on Dec. 12, 2012, the initial suit involved just eight plaintiffs. It was amended to bring the total to 51.

That action was thrown out at the end of 2013 by federal Judge Janis S. Sammartino on jurisdictional grounds.

The suit charges Tepco lied to the public—including Japan’s then Prime Minister Naoto Kan—about the accident’s radioactive impacts. Kan says Unit One melted within five hours of the earthquake, before U.S. fleet arrived. Such news is unwelcome to an industry with scores more reactors in earthquake zones worldwide.

Similar reports of fatal cost-cutting, mismanagement and the use and abuse of untrained personnel run throughout the 65-page complaint.

Attorney Bonner will explain much of it on the Solartopia Radio show at 5 p.m. EST on Tuesday, Feb. 11.

Some 4,000 supporters have signed petitions at nukefree.org, moveon.org, Avaaz and elsewhere.

Feb. 11—like the eleventh day of every month—will be a worldwide fast day for those supporting the victims of Fukushima’s deepening disaster.

The future of the U.S. Seventh Fleet, the nuclear power industry and a growing group young sailors tragically afflicted by Fukushima’s secret fallout will be hanging in the balance.