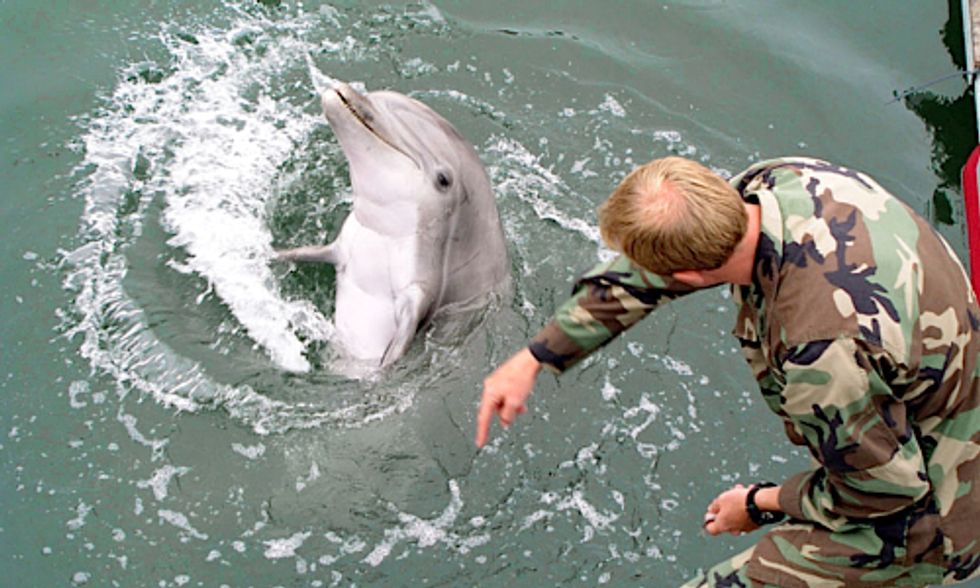 Early last week, it was reported that the U.S. Navy was sending military-trained dolphins to the Black Sea as an additional layer of defense against the Russian Navy, which had reportedly recently taken control of Ukraine’s military-trained marine life, including dolphins.

The U.S. Navy has used sea lions, dolphins and other marine mammals since the 1960s to search for underwater mines, rescue U.S. soldiers, attack enemy soldiers and plant explosives on enemy targets, among other missions. The Navy also studies these animals, hoping to learn how to design better torpedoes, ship hulls, missiles and sonar systems, but the U.S. military’s arguably violent use of the stereotypically friendly animals came as a shock to many.

The U.S. military doesn’t largely promote the program, possibly because animal rights activists have long objected to the use of animals for military purposes. Whether it’s this resistance or other factors, there are reportedly only a handful of places in the world where marine life is taught man’s dirty war tactics—one of which is in San Diego, CA.

Though the Navy initially denied that it was sending its trained dolphins and sea lions to the Black Sea, Tom Lapuzza, spokesperson for the U.S. Navy’s San Diego-based marine mammals program, told the International Business Times (IBT) that 20 dolphins and 10 sea lions would be sent to the Black Sea this summer to take part in a NATO drill testing a new anti-radar system.

According to the IBT report, the new system disorients enemy sonars “while sea lions and dolphins are looking for mines and military divers.” Recently developed armor for the dolphins will also be tested during the trial this summer, which is expected to last from one to two weeks.

Kathy Guillermo, senior vice president of People for the Ethical Treatment of Animals, an animal rights advocacy group, told MintPress News that she was surprised to hear the Navy was going back to using dolphins after announcing it was cutting back on the marine mammal program in the 1990s, citing a lack of uses for the dolphins due to new technology.

“Why in 2014 are we relying on dolphins for anything in the military, when we have come to an understanding that marine mammals are sophisticated and intelligent?” Guillermo asked. “They don’t belong to us. They are not our weapons, not our toys.”

Guillermo added that since dolphins don’t make war, they shouldn’t have to fight human wars, either.

Even some former naval staff and dolphin trainers agree the program is not in the best interests of the animals. As Navy Lt. Commander Douglas Burnett put it, there could be situations in which no one can tell whether an animal is a potential enemy, which could lead to a mass slaughter of marine life.

But according to James Fallin, a spokesman for Space and Warfare Systems Command Pacific, which oversees the Navy’s marine mammal program, there are some things sea lions and dolphins do better than any technology any human has created.

“Because of the unique capabilities of the marine mammals in the shallow water environment, there are several critical misions (sic) that they perform that cannot be matched by technology or hardware in the near-term,” Fallin said. “While the Navy is working on developing replacement technologies, there is no definitive pathway charged for a full replacement of the operational use of marine marine (sic) mammals.”

While it’s astonishing to learn just how much humans can and have learned from animals, many animal rights activists have expressed concern over use of the animals. They argue that the animals are violently captured in the wild, kept in cramped living quarters and negatively impacted by the tasks they’re asked to perform.

According to a letter to the U.S. military from the Biodiversity Legal Foundation, sonar technology negatively affects the animals.

“Sound penetrates an animal’s body when immersed in water. Essentially all of acoustic energy goes into a body immersed in water. This effect, which can cause tissue rupture and hemorrhage, has not been adequately addressed in the Navy’s [environmental impact statement],” the group wrote.

In other words, working with the Navy often causes marine life tissue to rupture and hemorrhage, and microscopic bubbles in their blood, bladders and lungs impede the animals’ ability to breathe and swim.

Due to the private nature of the U.S. military, Guillermo says it can’t be entirely known how dolphins are affected by their military duties, but she says scientists are aware that dolphins are incredibly intelligent and sensitive animals who depend upon connections for their both psychological and physical well-being. When they are separated from their friends and family—which often happens when they are captured—they become depressed, and are then forced to live in unnatural habitats.

When asked whether the military had opted to expand the marine mammal program after decreasing it in the 1990s, or if the military just said it had limited its use of marine life to appease the public, Guillermo said she didn’t know. She also said the military is highly sensitive to public opinion.

“They don’t want to say more than they really have to say,” Guillermo said, while talking about PETA’s efforts to expose the military’s use of goats and pigs in medical training exercises. “My guess is whatever they are actually doing, they will minimize it and sugar coat it and make it sound benign, while keeping the dolphins prisoners and then put them in harms way, while depriving them of everything that makes their life worth living.”