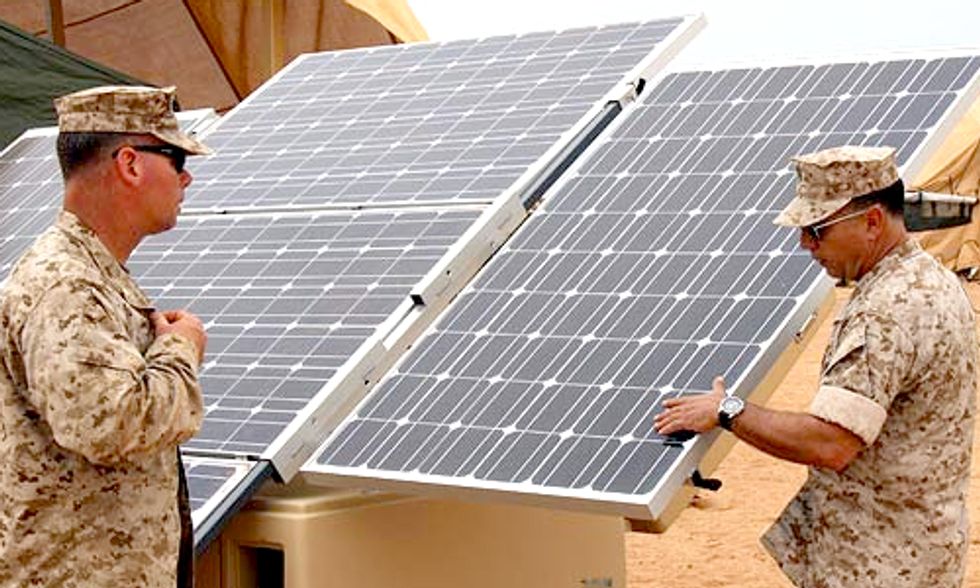 U.S. Armed Forces have been relying expertise from the private sector and third-party financing to deploy renewable energy, and a new report shows that it's been paying off tremendously.

Renewable projects on Department of Defense and military properties grew from 454 to 700 from 2010 to 2012, according to Power Surge, a report released today by the Pew Charitable Trusts.

The amount of energy saving and efficiency projects more than doubled—from 630 to 1,339—during the same period.

"The military’s clean energy installation initiatives are gathering momentum, enhancing base energy security,” said Phyllis Cuttino, director of Pew’s project on national security, energy, and climate. “These improvements are possible even as the Pentagon’s budget is shrinking because the armed services are harnessing private-sector expertise and resources.

"This is a win-win-win proposition: The military gets better energy infrastructure, taxpayer dollars are saved, and the clean energy industry is finding new market opportunities.”

The military receives a hefty $4 billion bill to power all of its bases and facilities each year, but the report says the Armed Forces have saved "hundreds of millions of dollars in energy costs by deploying efficient and renewable technologies" over the past decade. For example, the Marine Corps Logistics Base in Albany, GA uses a combined heat and power system to reduce carbon pollution. The system saves the base about $1.3 million each year and resulted in an Energy Star award from the U.S. Environmental Protection Agency in November.

The military has been using energy saving performance contracts and utility service contracts that involve little or no upfront cost. The private partner typically guarantees that the improivements will generate enough savings to pay for a project over the contract's term. One example in the study is the $3.2 million savings from a 1.5-megawatt solar array at the Marine Corps Air Ground Combat Center in Twentynine Palms, CA.

The power purchase agreements already in place are expected to finance about 80 percent of future renewable projects. The agreements call for developers to find financing and maintain the projects.

The study also discusses the Master Energy Performance Plan developed by the Pentagon. One of its primary goals is to increase on-site electricity generation with renewable energy, and deploy 3 gigawatts of renewable energy—enough to power 750,000 homes—by 2025.

“The Department of Defense has a long history of embracing energy challenges and has been at the forefront of innovation," said John Warner, a former U.S. senator and secretary of the Navy and senior adviser to the Pew study. "And so it is today that we find America’s armed forces in the midst of the transition to renewable power and efficiency technologies that help ensure a stable, diversified, and continuous supply of electricity. I commend the men and women of the armed forces who are making these changes possible with their spirit of ingenuity and commitment.”