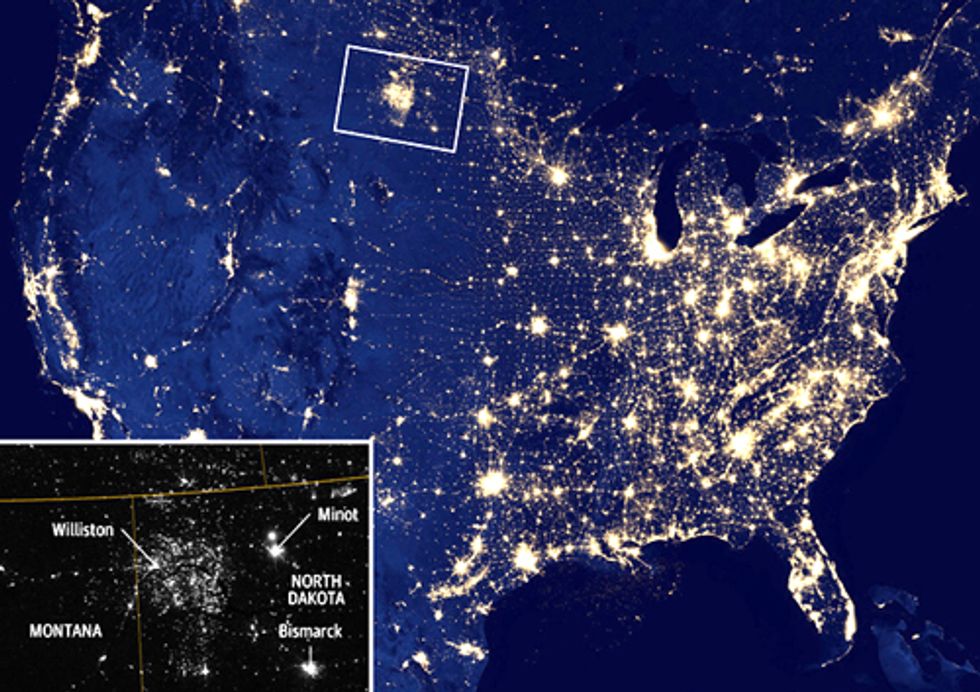 It is in the dark mangrove swamps of the Niger Delta where the gas flaring of the oil industry became synonymous with reckless environmental behavior.

“Some children have never known a dark night even though they have no electricity,” wrote one environmentalist after a visit.

The response for decades from the oil industry was that there was no market for the gas so the only option was to flare it. This disingenuous response has become more and more untenable over the years as environmental standards have increased worldwide.

Well now a great piece on the front of today’s Financial Times has revealed that it is not just in warm swamps of Nigeria or the cold tundra of Siberia that the oil industry is flaring. It is flaring in the U.S.’s backyard. The volume of gas flared in the U.S. has tripled in just five years due to the boom in shale oil. And the flares from the main oil shale fields are now so great they are visible from space.

Northwestern North Dakota is home to the Bakken shale formation, where fracking has led to an oil boom. Most of the bright lights are natural gas from wells being burned because the region lacks the infrastructure to pipe all the gas away. Gas production has increased rapidly in recent years but 30 percent is flared.
Image: NASA Earth Observatory image by Jesse Allen and Robert Simmon VIIRS/SUOMI

The U.S. is now the fifth worst country for flaring, behind Russia, Nigeria, Iran and Iraq.

Not only is this an ecological disaster but also a complete waste of a natural resource. The Financial Times reports that fracking companies in the U.S. are burning off enough gas to power all the homes in Chicago and Washington “in a practice causing growing concern about the waste of resources and damage to the environment.”

The volume of flaring in North Dakota, the leading state in the shale oil revolution increased by a whopping 50 percent last year. The Bakken field in the state is now responsible for 10 percent of total U.S. output but, because the state is remote, pipeline connections have failed to keep pace.

It all boils down to basic crude economics: “I’ll tell you why people flare: It’s cheap,” argues Troy Anderson, the lead operator of a North Dakota gas-processing plant. “Pipelines are expensive: You have to maintain them. You need permits to build them. They are a pain.”

An analysis by the Financial Times on the state of North Dakota reveals that due to the flaring, greenhouse gas emissions are 20 percent above the U.S. average.

The oil industry is using the same argument that it did in Nigeria—its cheaper to flare off gas than build expensive pipelines to harness it. Ironically, the industry is arguing that it’s the cheap price of gas in the U.S. that means that harnessing the gas is uneconomic.

Its not just environmentalists who are worried. Last year investors wrote to leading oil companies asking them to do more to cut flaring. Andrew Logan of Ceres, a network of environmentally-minded investors told the Financial Times that: “Excessive flaring is not only environmentally damaging but also a waste of a valuable resource. The industry’s lack of aggressive action threatens its licence to operate.”

The answer is simple: regulators could stop production until the infrastructure is in place to export the gas.

But they are not prepared to do this. “If we restricted oil production to reduce flaring, we would reduce the cash flow from oil wells fivefold,” the North Dakota Industrial Commission told the paper. “As well as cutting waste, we are mandated to increase production, which we would not be doing.”

Indeed, last year the U.S. Environmental Protection Agency extended the time that companies were allowed to flare until 2015.

So, for now, the flaring will continue and get worse. “This is not what you would expect a civilized, efficient society to do: to flare off a perfectly good product just because it’s expensive to bring to market,” argues Michael E. Webber, associate director of the Center for International Energy and Environmental Policy at the University of Texas at Austin.

Quite so, Michael. Quite so.