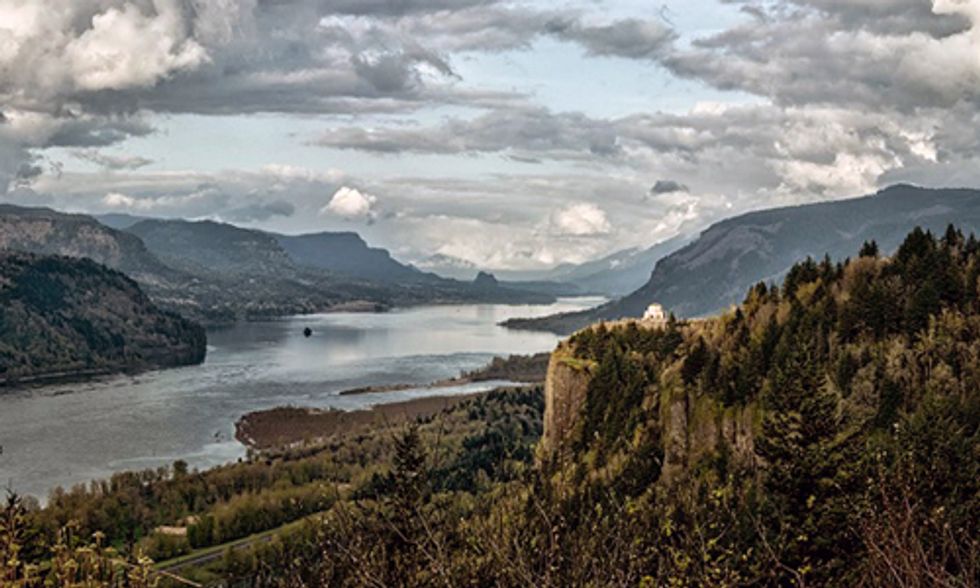 Oil and coal producers in the U.S. are planning to use mile-long tanker trains to transport vast quantities of fossil fuels to the coast through areas that environmental groups believe should be protected.

The protected Columbia River gorge through which crude oil is to be transported on huge trains. Photo credit: joshwhalenphotography.com

The change in world fossil fuel production, consumption and costs caused by tar sands exploitation in Canada and the fracking boom in the U.S. is causing what Bill McKibben—author, environmental activist and co-founder of the international climate campaign group 350.org—calls a “chokepoint” in the unspoiled Northwest of the country.

Coal is already being exported in even larger amounts from the U.S. because it cannot compete with cheaper gas from fracking. Now campaigners fear that the oil industry also wants to export cheap oil to Asia—although so far the companies deny it, saying it will be sent by sea to other parts of the U.S.

The largest of the 11 proposals to build new or expand existing crude-by-rail terminals is that of Tesoro-Savage at the Port of Vancouver, Washington, just across the Columbia River from Portland.

The company wants the capacity to transfer crude oil from the North American interior to seagoing tankers and barges. Four “unit trains,” each a mile long and comprising up to 100 tanker cars, would arrive at the terminal daily, delivering 360,000 barrels of oil. This would be the largest such terminal in the region.

The Columbia River is the lifeblood of the Pacific Northwest ecosystem, and was once home to what were claimed to be the world’s largest salmon runs. It is already stressed by 14 hydroelectric dams and barge traffic hauling grain and other products from the interior, as well as radiation leaking from the Hanford Nuclear Reservation in Richland, Washington.

The oil and coal trains must pass through the Columbia River Gorge National Scenic Area, a protected section of the river and its environs where hundreds of waterfalls create micro-habitats for species of plants found nowhere else on Earth.

Rail tracks run along very narrow routes on both sides of the river, sometimes on causeways on the river’s edge. They have already seen traffic increases. According to a report in the Oregonian newspaper, there was a 250 percent increase in the number of tankers passing through Oregon between 2006 and 2013.

Locations of the Pacific Northwest refineries and terminals under discussion.

Since the Arab oil embargo in the 1970s, the U.S. government has banned the export of crude oil. This means that, for the time being, crude oil from North Dakota will go to refineries in Washington state and California, replacing the declining supply from Alaska.

In addition, the Vancouver terminal “would have the capacity to displace 30 percent of the crude oil currently imported to West Coast refineries from foreign countries,” according to an email written by Elizabeth Watters, a spokesperson for Tesoro. She added that this would “increase U.S. energy security in an uncertain world.” Watters also said Tesoro-Savage has no plans to export oil.

“I think it’s likely that in the near term they might transport some of the fuel to west coast refineries in Washington or California, but it’s pretty clear that they have their sights set on a robust export market.”

In addition, De Place says, the terminals “could be receiving Canadian tar sands oil on day one” and exporting it immediately, because tar sands oil from Canada isn’t under U.S. export jurisdiction.

Coal can already be exported. In fact, U.S. coal exports have nearly doubled since 2007, and three coal terminals are currently under consideration in Oregon and Washington. If all were built, about 100 million tons of coal would depart from the Pacific Northwest annually.

There is remarkable resistance among disparate political and economic interests to expansion of the fossil fuel industry in the region.

The International Longshore and Warehouse Union objects to the Tesoro-Savage terminal on worker safety grounds because Bakken crude is far more flammable than other oil types, and there is opposition from local real estate developer working because he fears that the terminal would make his riverfront office/restaurant project untenable.

The city of Vancouver has passed a resolution against the terminal because of concerns about potential spills or explosions and traffic congestion. The state of Oregon rejected Australian corporation Ambre Energy’s coal terminal proposal at the Port of Morrow, and the Port of Portland has declined to consider adding oil-by-rail and coal terminals for the time being.

Governors of both Columbia River states have expressed concerns about climate impacts from the expansion of fossil fuel transportation in the region.

In a recent election debate, Oregon governor John Kitzhaber said: “It makes no sense to me to subsidies the burning of fossil fuels in Asia while we adopt state and federal policies that do just the opposite.”

Washington governor Jay Inslee is the sole person who will decide the Tesoro-Savage project’s fate. According to Inslee’s spokesperson, Jaime Smith, the governor believes that if “we are trying to wean ourselves off carbon-based fuels and use more clean energy technologies—if that is our intended goal as a state, as a nation—shouldn’t we be taking a look at that?”

But none of the political entities involved in deciding whether Tesoro-Savage can move ahead is obligated to consider climate impacts, leaving objections to the fossil fuels mostly to environmental campaigners. However, the states do have to consider issues of rail safety and the impact of possible spills.

If oil traveling to the Vancouver terminal is not exported, it wouldn’t necessarily add to the CO2 emissions already occurring in the U.S. because it would just “top up” the domestic supply—provided that U.S. consumption doesn’t rise.

But fossil fuels exported from the Pacific Northwest to Asia would certainly add to those emissions as Asia’s economies grow. Moreover, it would hoist the west coast by its own petard by increasing the hydrocarbon air pollution that already travels eastward across the Pacific from oil and coal burned in Asia.

Watters, asked whether Tesoro is concerned about climate change, wrote: “Tesoro recognises that climate change is an important global issue, and we are committed to reducing [greenhouse gas] emissions from our refineries to below 1990 levels.” He did not comment on the global warming potential of the fossil fuels Tesoro-Savage would be transporting.

What lifting the crude oil export ban would do to international and domestic crude oil and fuel prices is unclear. Brookings Institution analysts calculate that doing so would lower the price of gasoline by about $0.09 per gallon if the ban were lifted in 2015, and that U.S. exports would not affect the behavior of the Organization of the Petroleum Exporting Countries (OPEC).

The planning and permitting process for all the proposed Columbia River facilities will take several years.

Tesoro-Savage must submit a detailed environmental impact statement (EIS) to the Washington Department of Ecology, and a release of the draft EIS is expected in the spring of 2015, at which time public comment will be solicited.

The Washington energy facility siting agency will then make a recommendation to Governor Inslee, after which he will make his decision.

Other Pacific Northwest proposals are also in various stages of the process.

Until the oil and coal proposals are approved or rejected, it is still an open question whether the Pacific Northwest chokepoint will close to fossil fuels or be opened wider.