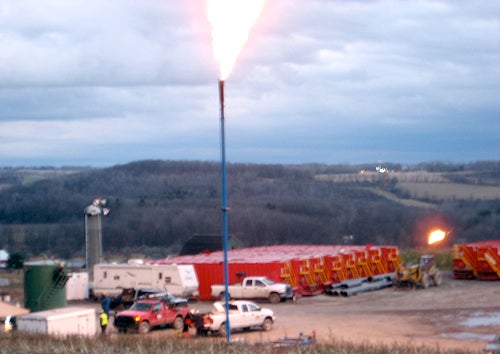 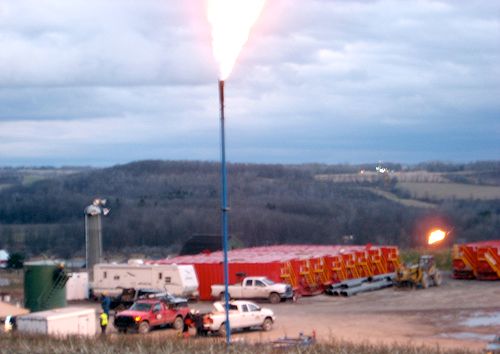 [Editor’s note: Thanks to Yale Environment 360 for publishing such an important piece on the issues relating to the natural gas drilling boom and its impact on stifling the renewable energy future of our country. Ohio is an excellent example of what happens when the majority of the state’s elected officials support continued extraction of fossil fuels and neglect passing the policies necessary to transition the state to relying on cleaner, renewable sources of energy.]

The story of American energy used to be that we consumed and imported too much, that fossil fuel reserves were finite, and that a technical breakthrough in clean alternatives would save us.

How 20th century. The new narrative of American energy is this—We’ve been using less. A national boom in oil and gas production—spreading across 12 states, from California to Pennsylvania and North Dakota to Texas—is showing we have much more than we thought. And the clean energy economy, tiny by comparison and roiled by uncertain markets, is still decades away.

No state embodies these trends more clearly than Ohio, which for years has been a modest oil and gas producer, and not long ago was widely viewed as a leader in passing legislation, promoting jobs and installing manufacturing for a clean energy economy.

Over the last year, though, everything in Ohio’s energy sector, like the nation’s, has changed. A surge in tapping so-called unconventional gas and oil reserves locked in underground shale formations is helping drive a national economic recovery, elevating fossil fuel production to a top economic priority, and dimming the glow of clean energy in the U.S., especially in natural gas-rich states like Ohio.

At night, on both sides of the upper Ohio River valley south of Pittsburgh, floodlights illuminate the table-flat summits of steep Appalachian ridges that now serve as production pads for natural gas wells and processing plants. Drilling rigs 18 stories tall are starting to tap huge reserves beneath 17,000 square miles of eastern and central Ohio.

Early production results from Ohio’s Columbiana, Carroll, Harrison and Belmont counties show the first completed wells are capable of producing millions of cubic feet of gas and more than 1,000 barrels of oil a day. Families are signing drilling leases that pay up to $5,800 an acre. Nearly $2 billion in new gas processing facilities have been announced for sites in the Ohio River Valley. The economy of the 145 miles of river from Pittsburgh to Marietta, for two generations a laboratory of industrial ruin, is perking up.

“It’s fantastic what this could do for this region,” said Sharon Davis, who owns a restaurant in Sardis, Ohio, and recently received up to $5,250 an acre for the 168 acres of minerals she and her family own in Monroe County.

Meanwhile, a plan to build an offshore wind farm in Lake Erie, near Cleveland, has faltered. Another proposal to build a big wind farm in western Ohio was fought to a standstill by local residents, who filed a lawsuit that went all the way to the state Supreme Court. In January, one of the state’s prominent solar manufacturing companies laid off half its workforce, and the chairman and founder of a second solar company resigned, leaving a skeletal staff and big debts. Cardinal Fastener, the Cleveland company that supplied bolts to wind turbine manufacturers, and which was visited by President-elect Obama in January 2009, declared bankruptcy last June, laid off most of the staff, and then was bought in November by a German manufacturer.

“The energy picture has changed dramatically,” said Eric Burkland, president of the Ohio Manufacturers’ Association. “The price of electrical power is low. The price of natural gas is low. It’s changed the thinking on all alternative technologies. It’s affecting solar. You could say it’s taking the wind out of wind.”

It wasn’t very long ago—2008 in fact—that clean energy production, and the development of a manufacturing sector to support it, represented a cogent business plan for Ohio and other states interested in creating jobs and reducing pollution and greenhouse gas emissions. President Obama ran on a platform that responded to rising gasoline prices and industrial obsolescence with a clean energy, good jobs message.

Now, President Obama talks about an “all of the above” energy strategy, as he did in January in the State of the Union, when he hailed the fossil fuel sector for generating more natural gas than ever before and for relying “less on foreign oil than in any of the past 16 years.” Weeks later the president dispatched Interior Secretary Ken Salazar to Ohio to tour a manufacturing plant that is adding jobs to build the bulk tank trailers used to haul millions of gallons of water to drill sites to hydro-fracture, or “frack,” the nation’s hydrocarbon-rich shales.

In Ohio and the Midwest, the contrast between the sagging fortunes of clean energy manufacturing and the boom in the fossil fuel industry is striking. In 2008, Ohio approved a renewable energy law that required utilities to purchase 25 percent of their power by 2025 from renewable and advanced energy sources. In 2010, the Environmental Law and Policy Center of the Midwest (ELPC), a Chicago-based nonprofit, counted 106 Ohio companies involved in supplying components for the wind industry, 63 supplying materials to the solar industry, and 9,000 workers in the state’s clean energy sector.

Today, no one in state government or the private sector is sure how many clean energy companies and jobs are still around in Ohio. Almost everybody agrees the sector is struggling. “There isn’t one big thing influencing the market here,” said Robert Kelter, a senior attorney in ELPC’s Columbus office. “There are a lot of factors. There’s been a change in administration in Ohio. The legislature wants to change the renewable energy law. There are other setbacks that lead to delay and layoffs. It’s hurting the industry.”

It’s not that Ohio has stopped generating power from new renewable energy installations. Iberdrola Renewables is getting ready to open a 304-megawatt wind farm in western Ohio, where another company opened a 100-megawatt wind farm last year. A 50-megawatt solar installation is planned for southern Ohio, along with a factory to build solar panels in Toledo. Nationwide, installed capacity for wind and solar power is small but growing briskly.

But solar energy manufacturers in Ohio and elsewhere are going out of business and wind energy suppliers are laying off workers, victims of competition from foreign manufacturers, low prices for natural gas, and uncertainty in renewing the federal production tax credit for wind power.

Iberdrola Renewables laid off 50 of its 900-member staff in January and the company’s executives say an amendment to Ohio’s renewable energy law would make it much harder to finance new wind farms in the state. The proposal, which Republican Gov. John Kasich supports, would enable AK Steel, an Ohio steelmaker, to use state renewable energy credits to develop electricity from waste gases from its blast furnace. The co-generation project, notes Eric Thumma, Iberdrola’s director of policy and regulatory affairs, is itself fueled in part by non-renewable natural gas.

AK Steel’s co-generation technology, the company asserts, fits into clean and renewable energy development in Ohio. The U.S. Department of Energy has already approved a $30 million grant for the project. Gov. Kasich, who has introduced a new state energy plan that emphasizes fossil fuel production, has said repeatedly that using waste heat or gases from industrial processes to generate electricity should qualify for renewable energy credits.

But there is already more than enough wind energy in operation or planned to soak up the available credits, says Thumma. The AK Steel project would add 100 megawatts of new power to the already saturated market and essentially render the renewable credits worthless. “It will crash the market for wind as a renewable energy in Ohio,” says Thumma.

Contrast the unsettled economics of Ohio’s renewable energy industry with the massing industrialization by the state’s fossil fuel sector. Some $3 billion is being spent on drilling, leasing, pipeline construction and supply chain manufacturing to serve the fossil fuel sector, according to the Ohio Department of Natural Resources. One new steel plant is opening in Youngstown and three others in Lorain and Canton are expanding to meet demand for drilling pipe and other equipment.

It takes a lot of steel to tap Ohio’s 4,000-foot-deep Marcellus shale, and 2,000 feet below it, the Utica shale. Geologists in state government say the Marcellus contains trillions of recoverable cubic feet of natural gas, a good deal of it so-called wet gas that produces ethane, propane and other compounds that can be easily processed into valuable fuels and feed-stock chemicals for rubber and plastics. Royal Dutch Shell this month announced that an upper Ohio River site, just across the state border in Monaca, Pa., is its favored location to build a multi-billion dollar plant to convert natural gas to ethylene and other feed-stock chemicals. The Utica shale may be even more valuable, say state geologists, because it holds 15.7 trillion cubic feet of gas and 5.5 billion barrels of recoverable oil.

Recovering natural gas and oil from deep shale formations, which uses millions of gallons of water shot down long wells at super high pressure, has stirred safety, health and environmental concerns in Ohio and other energy-producing states. But Kasich insists that Ohio is prepared for the onslaught and ready to limit the risks. “You cannot degrade the environment at the same time you’re producing this industry,” Kasich said in January. “It’s not acceptable. The biggest companies know that you need tough environmental rules.”

Ohio requires fracking wastewater to be recycled or disposed in deep injection wells. This month, the Ohio Department of Natural Resources imposed tough new regulations on the operators of the state’s 177 deep injection wastewater disposal wells.

“We have the opportunity to get in front of the development with stricter rules [and] oversee the industry better than other states have,” said Trent Dougherty, staff attorney and director of legal affairs at the Ohio Environmental Council.

Similar shale formations lie beneath much of the rest of the country and are being tapped at a furious pace. Last year, according to the Department of Energy’s Energy Information Administration, the number of oil and gas drilling rigs in operation across the U.S. reached an average of 1,876 a month, the highest rig count since 2008.

From the ridge summits high above the upper Ohio, on an unseasonably warm day late in a winter that wasn’t, some of the risks of perpetuating America’s fossil fuel economy are visible. The growl of bulldozers clearing trees for new roads and drill pads can be heard across a landscape that consists of miles of unbroken forest that is now being fragmented. Wide, muddy corridors have been cut up and down steep hillsides for pipelines that gather natural gas for transport to processing stations. Erosion is increasing and pouring mud into the region’s streams. Big trucks, spewing diesel exhaust, strain in low gear to haul equipment and water up narrow roads.

Certainly this fossil fuel boom comes with local economic benefits. Motels and campgrounds are full with skilled oilfield workers from Ohio and other states. Restaurants are busy. But many people, even those who’ve gained new jobs in the industry or reaped windfalls from mineral rights, are nervous. “Things will change now,” said Sharon Davis, the restaurant owner in Sardis. “We know that.”