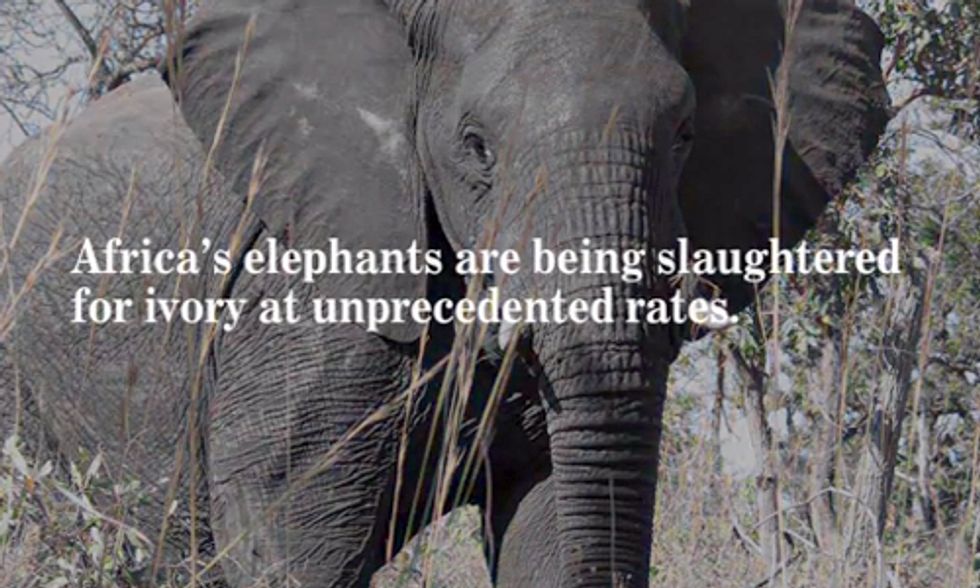 The U.S. yesterday destroyed its six-ton stock of confiscated elephant ivory, sending a clear message that the nation will not tolerate wildlife crime that threatens to wipe out the African elephant and a host of other species around the globe.

The destruction of this ivory, which took place at the U.S. Fish and Wildlife Service’s National Wildlife Property Repository on Rocky Mountain Arsenal National Wildlife Refuge near Denver, CO, was witnessed by representatives of African nations and other countries, dozens of leading conservationists and international media representatives. It is the latest in a series of actions by the Obama Administration designed to crack down on international poaching and illegal wildlife trafficking.

“Rising demand for ivory is fueling a renewed and horrific slaughter of elephants in Africa, threatening remaining populations across the continent,” said Secretary of the Interior Sally Jewell. “We will continue to work aggressively with the Department of Justice and law enforcement agencies around the world to investigate, arrest and prosecute criminals who traffic in ivory."

"We encourage other nations to join us in destroying confiscated ivory stockpiles and taking other actions to combat wildlife crime,” she concluded.

Some six tons of ivory were pulverized by an industrial rock crusher in front of some of the world’s most influential conservationists. Speakers included U.S. Fish and Wildlife Service Director Dan Ashe; Ginette Hemley, senior vice president of World Wildlife Fund (WWF); Azzedine Downes, CEO of the International Fund for Animal Welfare (IFAW); and Paula Kahumbu, executive director of WildlifeDirect.

“By crushing its contraband ivory tusks and trinkets, the U.S. government sends a signal that it will not tolerate the senseless killing of elephants,” said Carter Roberts, president and CEO of WWF. “Other countries need to join the U.S., Gabon, Kenya and the Philippines to take a stand against the crime syndicates behind this slaughter."

“The destruction of the U.S. ivory stockpile speaks loud and clear to those who value ivory more than saving the elephant species from extinction,” said Downes. “IFAW commends the government’s action that underscores the critical role the U.S. can play in ending the illegal ivory trade.”

The destruction of the ivory follows an announcement by the President establishing the first ever council to advise the government on ways to improve coordination and implementation of domestic and international efforts to fight poaching and illegal wildlife trafficking. Formation of the council stemmed directly from his July 1 Executive Order directing U.S. government agencies to ramp up efforts to stamp out the illegal wildlife trade.

The Service accumulated the ivory destroyed yesterday over the past 25 years, seizing it during undercover investigations of organized smuggling operations or confiscating it at the U.S. border. Although it is difficult to put an exact figure on the number of different elephants this ivory represents, it certainly numbers in the thousands. Prior to being seized, most of this ivory was destined to be sold illegally in the U.S. or overseas.

Elephant massacres have taken place in Chad, Cameroon and the Central African Republic in the past year alone. Photo credit: U.S. Fish and Wildlife Service /Flickr

“The U.S. is part of the problem, because much of the world’s trade in wild animal and plant species—both legal and illegal—is driven by U.S. consumers or passes through our ports on the way to other nations. We have to be part of the solution,” Ashe said. “The species and habitats of our planet support billions of people and drive the world’s economy. We all have a stake in ensuring their survival.”

“Similar demand for elephant ivory in the past led to devastating declines in the number of these giant animals, particularly in the 1970s and 1980s,” Ashe added. “Although many populations showed signs of recovery due to increased protections in the 1990s, rising global demand for ivory is erasing those hard-fought gains.”

In the last ten years, an estimated 11,000 forest elephants were killed in Gabon’s Minkebe National Park alone. During that time period, the total population of forest elephants plummeted by an estimated 62 percent across Central Africa. Elephant massacres have taken place in Chad, Cameroon and the Central African Republic in the past year. Well-armed and organized criminal enterprises have taken advantage of insufficient protection capacity in remote areas.

Although some African elephant ivory (including lawfully hunted trophies and antiques that meet specific requirements) can still be imported legally into this country with appropriate permits, the U.S. generally prohibits commercial trade of both raw ivory and ivory products. The service is currently evaluating ways to further strengthen its elephant ivory trade controls.

In addition to law enforcement efforts, the service also works to support on-the-ground efforts to conserve elephants through the Wildlife Without Borders African Elephant Conservation Fund and the Africa Regional Program. These programs, in partnership with government agencies, private organizations and local communities, are supporting initiatives to conserve and manage African elephants through law enforcement, habitat management, community initiatives and other effective conservation methods.

In 2012, the service awarded grants for African elephant conservation totaling $1,397,916, which raised an additional $1,606,004 in leveraged funds. Grants supported field projects in 13 nations, focusing on the protection of vulnerable elephant populations and increasing the capacity of partner countries to prevent elephant poaching and ivory trafficking.

The ivory fragments left by the crusher will be stored temporarily at the Service’s National Wildlife Property Repository. The agency is working with the Association of Zoos and Aquariums and other partners to identify how best to use this material to increase awareness of the global poaching crisis and commemorate this historic event.