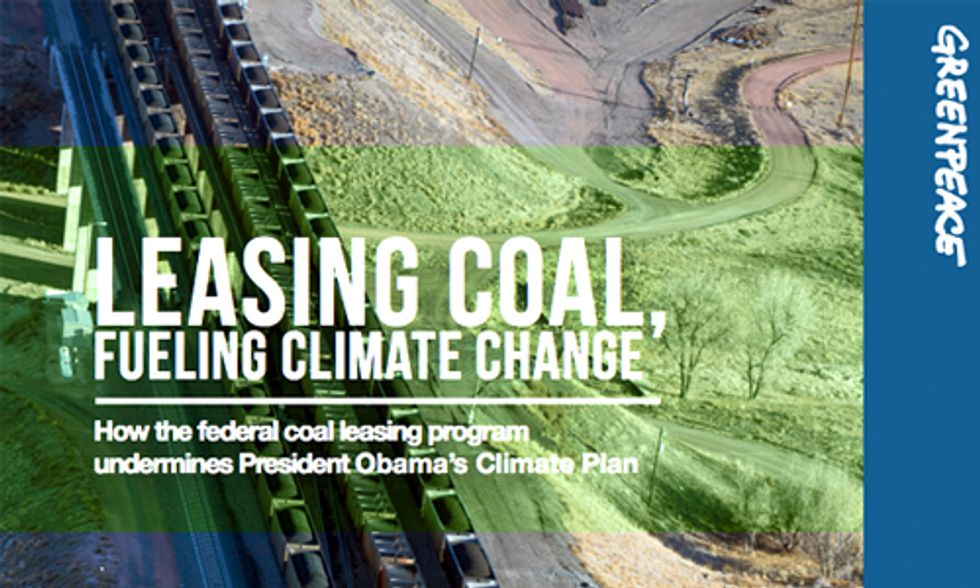 Greenpeace USA has released a major new report on an under-discussed part of President Obama's Climate Action Plan and his U.S. Environmental Protection Agency (EPA) carbon rule: it serves as a major endorsement of continued coal production and export to overseas markets.

The main culprit for rampant coal production is the U.S. Bureau of Land Management, which leases out huge swaths of land to the coal industry.

The Greenpeace report was released on the same day as a major story published by the Associated Press covering the same topic and comes a week after the release of another major report on coal exports by the Sightline Institute that sings a similar tune.

The hits keep coming: Rolling Stone's Tim Dickinson framed what is taking place similarly in a recent piece, as did Luiza Ch. Savage of Maclean's Magazine and Bloomberg BNA.

But back to Greenpeace. As their report points out, the main culprit for rampant coal production is the U.S. Bureau of Land Management (BLM), which leases out huge swaths of land to the coal industry. Greenpeace says this is occurring in defiance of Obama's Climate Action Plan and have called for a moratorium on leasing public land for coal extraction.

“[S]o far, the Bureau of Land Management and Interior Department have continued to ignore the carbon pollution from leasing publicly owned coal, and have failed to pursue meaningful reform of the program,” says the report.

“Interior Secretary Sally Jewell and others in the Obama administration should take the President’s call to climate action seriously, beginning with a moratorium and comprehensive review of the federal coal leasing program, including its role in fueling the climate crisis.”

Some of the numbers crunched by Greenpeace USA make the jaw drop.

For example, one chart shows the amount of coal leased by the BLM during Obama's time in the White House. During that time, the BLM has leased off billions of tons of coal from Colorado, Montana and North Dakota, New Mexico, Utah and Wyoming alone.

As Greenpeace points out, “This is equivalent to the annual emissions of over 825 million passenger vehicles, and more than the 3.7 billion tons that was emitted in the entire European Union in 2012.”

Further, in crunching the numbers on the social cost of carbon metrics, Greenpeace estimates producing all of this BLM-leased coal will cause between $52-$530 billion in damages.

A recent major, precedent-setting federal court decision chided BLM for not taking the social cost of carbon into account in leasing out a plot of land for coal production. It remains unclear whether or not this will impact BLM's future coal leasing activities, however.

Interestingly and perhaps shockingly to many, much of this coal is being exported to Germany, home of what some have hailed the epicenter of the global green energy revolution. Though German coal mining is going by the wayside, imports are rising.

“German coal mining has been a dying tradition. The government will end subsidies in 2018, effectively killing it,” explained the Associated Press story.

“However, Germany is experiencing a resurgence in coal-fired power. Five German coal plants have been built since 2008, and more are coming … The result: In 2013, Germany's emissions of carbon dioxide grew by 1.2 percent.”

Dirk Jansen, spokesman for Friends of the Earth-Germany, called the situation at-large tantamount to “greenwashing” in an interview with the Associated Press.

“Obama pretties up his own climate balance, but it doesn't help the global climate at all if Obama's carbon dioxide is coming out of chimneys in Germany.”

Beyond Obama, though, it raises equally troubling questions about just how “clean” Germany's clean break will be when all is said and done.