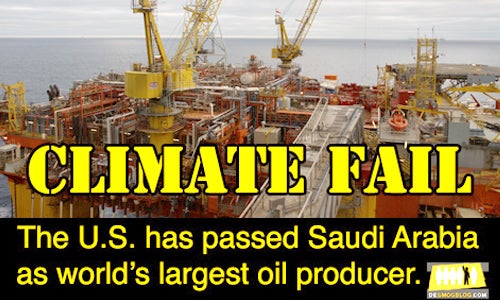 Is President Obama’s “all of the above” energy policy a success? Or a climate failure?

A report issued recently by Bank of America declared the U.S. has now surpassed Saudi Arabia as the world’s largest oil producer. The daily output average for the first quarter of 2104 exceeded 11 million barrels, a significant increase from the previous quarters’ (Sept-Dec 2013) average of 7 million barrels, according to the International Energy Agency. 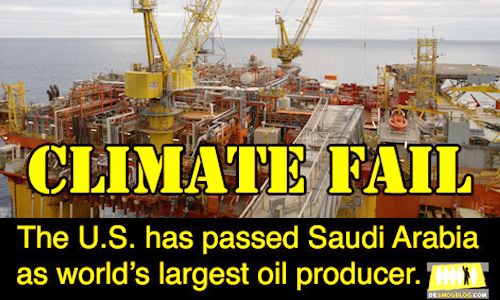 President Obama’s “all of the above” energy strategy is in stark contrast both to his climate rhetoric and, more importantly, to the warnings of the world’s leading climate scientists. Photo credit: DeSmogBlog

The expansion of domestic oil production in the U.S. has been significant under President Obama, supported by his “all of the above”—or rather the American Petroleum Institute’s “all of the above”—energy strategy which has overseen a four-fold increase in drilling rigs under his administration.

News of the surge in U.S. oil production was reported almost concurrently with the release of another news item: global climate scientists have again reported historically high levels of atmospheric carbon. As reported by Climate Central, June 2014 was the third month in a row in which carbon dioxide levels in our atmosphere topped an average of 400 parts per million—a level not seen on Earth in at least 800,000 years.

Dr. Pieter Tans, a senior climate scientist with the National Oceanic and Atmospheric Administration, said, “As long as human society continues to emit CO2 from burning fossil fuels, CO2 in the atmosphere and oceans will continue to increase … It is urgent that we find a way to transition to non-carbon fuels as our source of primary energy.”

Despite these warnings, Obama’s “all of the above” policies have in fact supported the increased development of key fossil fuel production sectors:

The increase in U.S. oil production also helps accommodate a surge of growth in U.S. oil consumption. In 2013, U.S. oil consumption rose by more than 390,000 barrels per day from its levels in 2012, up to more than 18 million bbd. For the first time since 1999, the use of oil in the U.S. rose more rapidly than in the rest of the world. These trends in both oil production and consumption stand in direct opposition to the warning calls from the scientific community about the consequences of increased burning of fossil fuels. This, from the most recent National Climate Assessment Report:

“The amount of (global) warming projected beyond the next few decades is directly linked to the cumulative global emissions of heat-trapping gases and particles. By the end of this century, a roughly 3°F to 5°F rise is projected under a lower emissions scenario, which would require substantial reductions in emissions and a 5°F to 10°F rise for a higher emissions scenario assuming continued increases in emissions predominantly from fossil fuel combustion.”

“The amount of future climate change … will still largely be determined by choices society makes about emissions.”

President Obama’s “all of the above” energy strategy—in stark contrast both to his climate rhetoric and, more importantly, to the warnings of the world’s leading climate scientists —indeed supports the continued production and consumption of the principal fossil fuel sources of man-made greenhouse gas emissions at a tragically wrong time in history.

Our nation’s ‘achievement’ in becoming the world’s #1 oil producer—at the very time atmospheric levels of carbon continue to rise at historic, dangerous levels—represents nothing less than the huge climate change failure of Obama’s “All of the above” energy strategy.

Here are some of President Obama’s quotes on climate change and the need to move beyond oil:

“Someday, our children, and our children’s children, will look at us in the eye and they’ll ask us, did we do all that we could when we had the chance to deal with this problem and leave them a cleaner, safe, more stable world?” —President Barack Obama, June 25, 2013

“I refuse to condemn your generation and future generations to a planet that’s beyond fixing.” —President Barack Obama, June 25, 2013

“The next generation will not be held hostage to energy sources from the last century. We are not going to move backwards. We are going to move forward.” —President Barack Obama, June 2, 2010