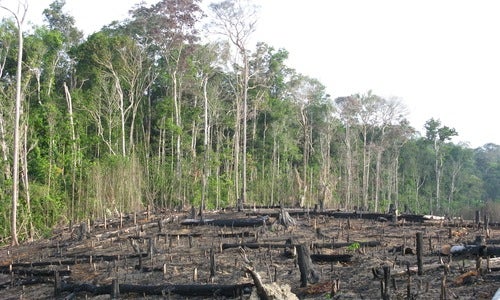 A new report names major U.S. and European banks that are financing land grabs in Indonesia for palm oil production—which is harming the rainforest and the lives of the people who live there—and the investors who are profiting from the business.

Palm oil producers in Indonesia are clearing tropical rainforests to plant their oil palm trees, obliterating the homes of endangered animals like orangutans, pygmy elephants and Sumatran tigers. The report, released Thursday by Friends of the Earth, Forest Heroes and SumOfUs, shows how this forest destruction not only harms forest peoples, endangered species and the Earth’s climate, but often is illegal. 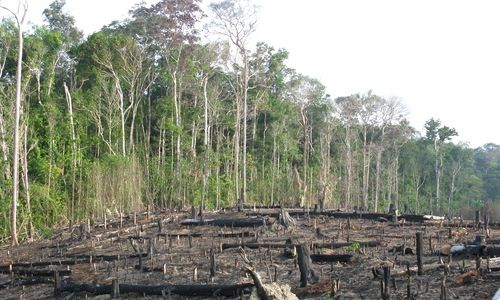 Commodity Crimes: Illicit Land Grabs, Illegal Palm Oil and Endangered Orangutans documents how one Indonesian company, Bumitama Agri Ltd., engaged in systematic forest destruction in and around forest reserves. In 2012 the company sold itself in a public offering that admitted to illegally cleared tracts of forest.

The financial maneuvers of Bumitama Agri—a leading supplier to the global market, including to Wilmar International, the world’s largest palm oil trader— also raise questions about compliance with Indonesia’s tax laws and laws against money laundering.

The report used on-the-ground investigation, global commodity trade data and satellite mapping to document how two companies affiliated with Bumitama have systematically violated Indonesian law, the guidelines of the industry-sponsored Roundtable on Sustainable Palm Oil and the sustainability policies of international finance institutions.

The companies illegally cleared thousands of acres of forests and fragile peatlands that are home to some of the world’s greatest biodiversity, including critically endangered orangutans, says the report, which is accompanied by a short video providing graphic testimony to the destruction.

The report traces a chain of culpability that stretches the length of the palm oil supply chain:

More than half of food and cosmetics on U.S. stores shelves contain palm oil.

“Most consumers of packaged foods don’t know they are contributing to the illegal destruction of rainforests,” said Jeff Conant, Friends of the Earth international forests campaigner. “But financiers who invest in palm oil—with full knowledge of the industry’s corrupt and rapacious way of doing business—have no such excuse.

“We call on all financiers of Bumitama, Wilmar and IOI to pressure these companies to clean up their acts, or to withdraw their financing,” he said.

The case illustrates how poor regulations and complicated land and asset transfers allow palm companies and commodity traders to take control of land, regardless of its legal status, traditional use or ecological importance. The environmental, social and governance policies that many financiers have adopted are insufficient to contain abuses in the palm oil sector, the report says.

“Companies are often quick to hide the destructive origins of their palm oil by citing complicated supply chains and muddled regulatory landscapes, while hiding behind greenwashing certification systems like RSPO,” said Rob Wohl, campaigner with SumOfUs.org. “But companies like Nestlé, Ferrero Rocher and Unilever have shown that it is feasible to eliminate deforestation and exploitation from products and implement fully traceable supply chains. Companies should stop forcing consumers to choose between their brands and the world’s rainforests.”

Indonesia’s forest destruction, much of it for palm oil, makes it the third-largest emitter of greenhouse gases after the U.S. and China. The country established a moratorium on new forest clearing in 2010 and extended it earlier this year, but the rule has been widely criticized for poor implementation.

“The government of Indonesia should immediately show that they are serious about protecting communities’ rights and saving the remaining forests,” said Zenzi Suhadi, forest and plantation campaign manager at Walhi (Friends of the Earth Indonesia). “They should stop issuing new permits to palm oil companies, evaluate existing permits and prosecute violations. Indonesia’s much-heralded moratorium on new plantations is a commitment to the whole world. But to achieve real forest protection, it needs to be implemented with consistency.”

Here is a video by Friends of the Earth on the report’s findings:

Visit EcoWatch’s BIODIVERSITY and FOOD pages for more related news on this topic.