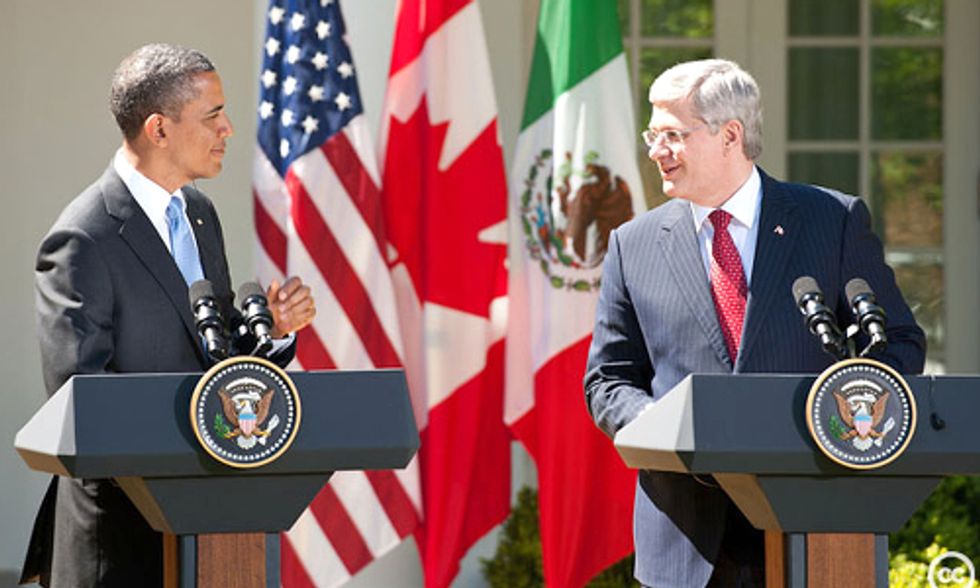 As the U.S. Environmental Protection Agency (EPA) announced that it would seek to reduce carbon pollution from power plants—a move that would put the U.S. on a trajectory to meeting its international climate obligations—Canada continued to move in the opposite direction.

Canada has now confirmed it will no longer take action to limit carbon pollution from its tar sands sector until the U.S. takes simultaneous action on its oil and gas sector. Previously, Canada has indicated it would act unilaterally to ratchet down on soaring greenhouse gas emissions from its tar sands sector which pose the greatest barrier to the country meeting its international climate commitments. But any hope that the Obama Administration’s announcement this week might instill simultaneous leadership for action from the current Conservative government evaporated.

Basically the Canadian position sets up a false equivalence as a way to justify doing nothing. The real issue is whether a country is acting to reduce its carbon pollution. The main way the U.S. can do that is to limit pollution from power plants—the single largest U.S. source, and that’s just what the U.S. announced it was doing. The main way for Canada to cut carbon pollution is to reduce the burgeoning emissions from its tar sands development, and Canada just announced that it isn’t doing that. So the contrast is clear: meaningful action vs. significant foot-dragging. Anything else is a distraction. In a historic announcement, the Obama Administration unveiled plans to cut U.S. carbon pollution emissions by 30 percent from 2005 levels by 2030, leading to climate and health benefits worth as much as $93 billion while avoiding up to 6,600 premature deaths and up to 150,000 asthma attacks in children. And the plan, if strengthened, could create more than 274,000 new jobs related to energy efficiency and renewable energy triggered by the standards.

Within a few hours of the U.S. announcement, the Canadian government said it was ready to work with the U.S. on rules for the continent’s oil and gas sector. Canada’s Environment Minister Leona Aglukkaq stated the Harper government “would like to work in concert with the United States on reducing greenhouse gas emissions from the oil and gas sector. The integration of our economies suggest our countries should be taking action together, not alone.” This was echoed by Canadian Ambassador to the U.S. Gary Doer who took to the airwaves with a similar message.

But this reaction from the Canadian government (something they had already signaled in late 2013) is, in fact, a policy shift away from a promise it had made to the Canadian public that it would regulate this sector. Why is it so important for Canada to take action? Surging emissions from the tar sands industry are responsible for a quarter of national emissions, according to the Pembina Institute. Because of this, Canada is expected to miss its international 2020 climate target by a wide margin—more than the current emissions of Canada’s entire electricity sector, according to the Pembina Institute.

The federal Canadian government clearly hopes that its call for harmonized federal regulations becomes a convenient distraction away from any attention to the fact that it has still not regulated its massive oil and gas industry. Let’s keep in mind that work on these Canadian regulations started back in 2008. But now, almost eight years later, the long-promised regulations on its tar sands sector are merely a pipedream. Now, they are indicating they won’t act unless the U.S. regulates carbon from its oil sector. There are good reasons why Canada should move ahead to regulate its tar sands sector (a sector which does not exist in the U.S.) given its significant contribution to Canada’s climate pollution problem. In short, the two countries have very different emissions profiles.

According to Canada’s Pembina Institute, “The best way Ottawa could respond to today’s announcement by the EPA would be to make an equally serious commitment to hit Canada’s 2020 climate target, and produce the rules required to cut emissions from the oil and gas sector. The government’s ongoing delay in releasing those rules is indefensible.”

The Canadian government largely defends its failed climate record by pointing to its recently adopted regulations on coal-fired electricity. Canada has made good progress on its coal industry (largely due to leadership from its provinces like Ontario) but its federal regulations are weak and do not apply to existing units (built before July 2015) until they have reached the end of their economic life. What does this mean? This mean a coal plant can run for a full half century without federal GHG limits. For one unit in Alberta which started operations in 2011, this means continued operation without carbon pollution limits until 2061. Altogether, the coal regulations will reduce Canada’s total emission by less than one percent.

In the end, the U.S. administration is working hard to demonstration international climate leadership to both meet its climate obligations and to help spur other countries to do the same. The question is whether Canada will look to this development as an opportunity to make serious progress on its climate commitments or whether it will be business as usual.

Canada’s position on climate ought to be part of the overall calculus for the Obama Administration and Secretary Kerry’s State Department, which is evaluating the proposed Keystone XL tar sands pipeline. International climate leadership should be something they look for as part of the national interest determination. So far, Canada hasn’t measured up.