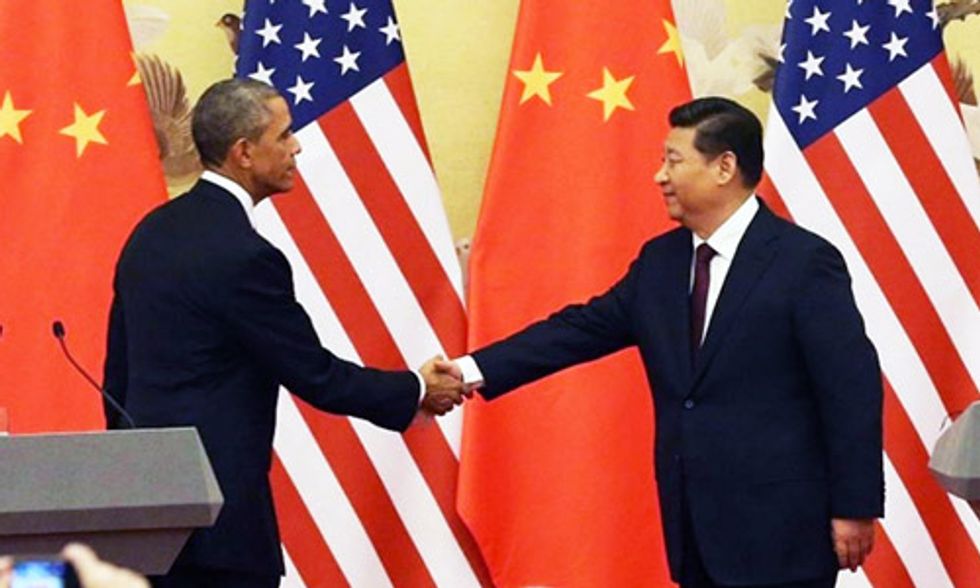 The U.S. and China will sign the Paris agreement on climate change on April 22, the first day they can do so, Presidents Obama and Xi announced Thursday.

The presidents also indicated that they are planning agreements to limit aviation emissions and the powerful greenhouses gases known as HFCs. Experts and environmental groups are heralding the announcement as a “significant” step, saying that the U.S.-China commitment sends a “strong signal” to other countries.

1. Over the past three years, climate change has become a pillar of the U.S.-China bilateral relationship. Both countries have taken strong measures at home to build green, low-carbon and climate-resilient economies, helping galvanize global action to combat climate change and culminating in the Paris Agreement reached last December. With their joint announcement of ambitious climate actions in November 2014, President Barack Obama and President Xi Jinping sought to lead by example, and by the time the Paris conference opened a year later, some 186 countries had put forward their own climate actions. In September 2015, the two leaders laid out a common vision for the Paris outcome during President Xi’s State Visit to Washington and also announced major domestic policy measures and cooperative initiatives to combat climate change, as well as significant progress on climate finance. In Paris, the United States and China, working together and with others, played a critical role in crafting a historic, ambitious global climate change agreement.

2. Today, the two Presidents announce another significant step in their joint climate efforts. The United States and China will sign the Paris Agreement on April 22nd and take their respective domestic steps in order to join the Agreement as early as possible this year. They encourage other Parties to the United Nations Framework Convention on Climate Change to do the same, with a view to bringing the Paris Agreement into force as early as possible. The Presidents further express their commitment to work together and with others to promote the full implementation of the Paris Agreement to win the fight against the climate threat.

3. The Presidents recognize that the Paris Agreement marks a global commitment to tackling climate change and a strong signal of the need for a swift transition to low-carbon, climate-resilient economies. In this regard, the Presidents are also committed to working bilaterally and with other countries to achieve successful outcomes this year in related multilateral fora, including on an HFC amendment under the Montreal Protocol pursuant to the Dubai Pathway and on a global market-based measure for addressing greenhouse gas emissions from international aviation at the International Civil Aviation Organization Assembly. To accelerate clean energy innovation and deployment, they will work together to implement the goals of the Mission Innovation initiative announced at the Paris conference and carry forward the work of the Clean Energy Ministerial. They support a successful G-20 Summit in Hangzhou this year, including strong climate and clean energy outcomes, and call on the G-20 countries to engage constructively in international cooperation on energy and climate change. And they will continue to deepen and broaden bilateral cooperation through the U.S.-China Climate Change Working Group, the U.S.-China Clean Energy Research Center, and other efforts.

4. Finally, the Presidents commit to taking concrete steps to implement the commitments they made in their September 2015 Joint Statement to use public resources to finance and encourage the transition toward low carbon technologies as a priority. Since the Joint Statement, the United States led an effort in the OECD to successfully adopt the first-ever set of multilateral standards for support of coal-fired power plants using export credit, and China has been strengthening its green and low-carbon policies and regulations with a view to strictly controlling public investment flowing into projects with high pollution and carbon emissions both domestically and internationally.

5. The joint efforts by China and the United States on climate change will serve as an enduring legacy of the partnership between our two countries.