U.N. Climate Meeting is a Fork in the Road 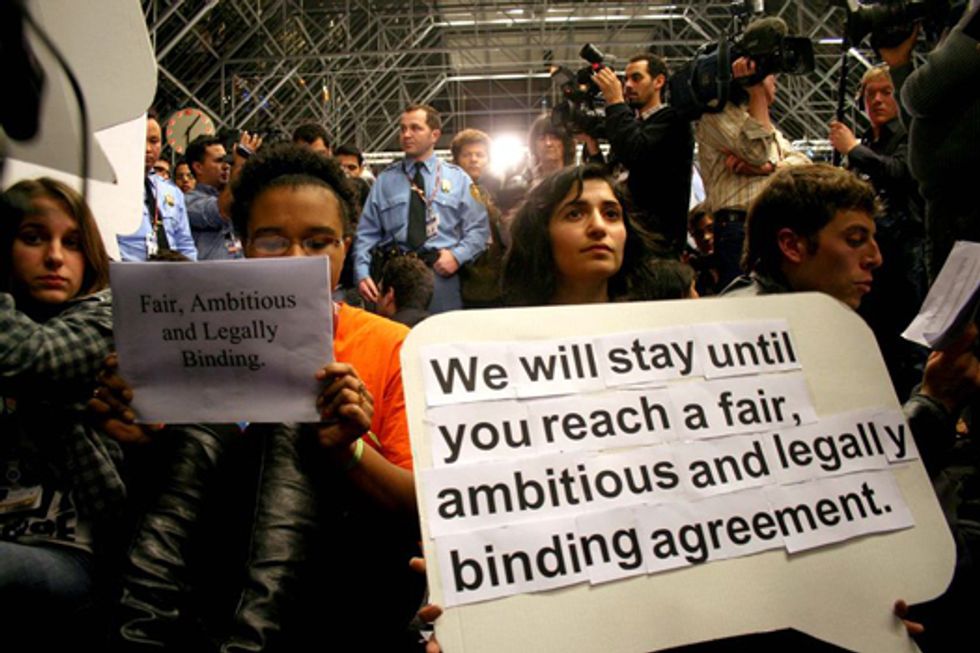 Annual United Nations (U.N.) climate treaty talks taking place between Nov. 28 and Dec. 9 in Durban, South Africa, represent “a crucial fork in the road” for negotiators, according to Alden Meyer, director of strategy and policy at the Union of Concerned Scientists (UCS), who has been attending these negotiations for more than 20 years.

“With the Kyoto Protocol’s first emissions-reduction commitment period ending next year, countries face a stark choice,” Meyer said. “They can preserve Kyoto’s legally binding architecture and commit to build on it by negotiating a more comprehensive and ambitious treaty over the next few years that includes commitments for the U.S., China and other major emitting countries. Or they can fail to act, let countries make emissions cuts as they see fit, and just hope that those reductions will be enough to prevent the worst impacts of climate change.”

A number of countries already have announced they will make specific emissions cuts under the Copenhagen Accord, which was established at the annual U.N. climate conference two years ago. Those promised reductions, however, would not be enough to prevent average world temperatures from rising more than 2 degrees Celsius above pre-industrial levels, an increase that many scientists say would ensure some of the worst consequences of climate change. Consequently, the 190 nations participating in the ongoing talks have made a commitment to avoid a 2-degree Celsius temperature increase.

“The world has the best chance of staying within that threshold by establishing a binding climate treaty,” said Meyer. “There’s always the chance that countries will make enough progress on some important issues—namely reducing deforestation and providing funds to help developing countries reduce their emissions and adapt to climate change—that it buys negotiators another year to continue talks. But even under that scenario, key sticking points likely would remain.”

One of the primary hurdles is the United States' refusal to negotiate a new treaty unless major developing countries, such as China, India and Brazil, agree upfront that they will accept the same kind of legally binding commitments as the U.S.

The U.S. knows its preconditions for new negotiations are non-starters, and will serve only to block progress in Durban,” he added. “We need more flexibility on this issue from the United States to get to ‘yes’ by the end of the talks.”

Meanwhile, the European Union has agreed to abide by its Kyoto Protocol emission-reduction commitment beyond 2012 if other major carbon emitters, including the U.S., China, India and Brazil, agree to work toward a treaty. Japan, Russia and Canada have stated that they will not maintain commitments under Kyoto beyond next year under any circumstances, but there would be pressure on them to reconsider this stance if delegates reach an agreement on negotiating a broader treaty.

The other big issue in Durban will be climate finance—how to ramp up financial assistance for a developing country to deploy clean technologies, reduce deforestation and adapt to the rapidly mounting impacts of climate change. Specifically, negotiators will try to make progress on establishing the Green Climate Fund that delegates supported at last year’s climate talks in Cancun, Mexico, and will discuss options for meeting the commitment made by developed countries two years ago in Copenhagen to mobilize $100 billion a year by 2020 for developing country actions on climate.

The U.S. is an obstacle to progress on this front as well, joining Saudi Arabia in blocking consensus at a preparatory meeting in Cape Town, South Africa last month on recommendations for setting up the Green Climate Fund, and objecting to holding discussions on ways to meet the long-term climate finance goal.

“No one is expecting the United States to put specific pledges on the table in Durban,” Meyer said. “But there needs to be progress on the finance issue, or developing countries will justifiably question whether the commitments made in Copenhagen and Cancun are real.” He pointed out that other donor countries, such as the European Union, support starting a process in Durban to identify sources of long-term finance that can help meet the $100-billion goal.

Treaty negotiators also will focus on producing a plan that would help developing countries reduce their emissions from tropical deforestation, which is responsible for about 15 percent of global warming pollution.

“Brazil has its own version of this plan and it’s proven successful,” said Doug Boucher, director of climate research and analysis at UCS. “With financial help from Norway, Brazil reduced tropical rainforest destruction by two-thirds between 2005 and 2010. This year’s data, which will be released within the next few weeks, likely will show a slight increase but still at the same low levels.

“Thanks to the country’s deforestation plan, since 2005, Brazil emitted about a billion tons less global warming pollution per year than what it emitted between 1996 and 2005,” he added. “To put that into perspective, that’s nearly the same amount of reductions that last year’s U.S. Senate climate bill would have brought about between 2005 and 2020.”

Negotiators in Durban will discuss the deforestation level each country should use to gauge its reductions. They also will consider ways to ensure indigenous communities and biodiversity are protected under a prospective deforestation plan.

“Also on the table is the question of who will provide funding to help developing countries reduce their deforestation rates and where the funding will come from,” said Boucher. “It could come from governments, like Norway’s multibillion-dollar funding that helped Brazil make such a huge dent in its deforestation rate, or from a carbon market, such as the one California is setting up.”

In Cancun, countries agreed to establish a “technology mechanism” to encourage countries to share technology and know-how to reduce emissions and help countries cope with the impacts of climate change.

“Negotiations at Durban should ensure that this technology mechanism becomes fully operational in 2012,” said Rachel Cleetus, a senior climate economist at UCS. “A rapid global transition to clean, renewable energy sources is critical to addressing the challenge of climate change. Communities at risk from the impacts of climate change, some which are already happening, also need technologies that will help them build resilience and adapt.

“The big question is where the funding for the technology mechanism will come from, so we will be waiting to see what happens at Durban with the Green Climate Fund,” she said. “That said, negotiators can make key decisions about the technology mechanism’s governance, structure and work program independent of the fund, and they should push for the most ambitious outcome possible.”