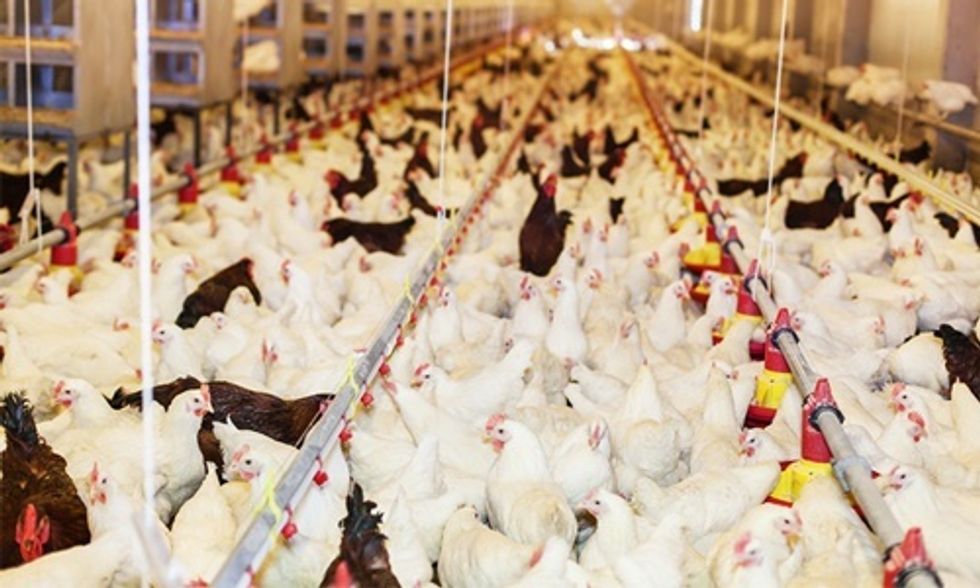 As shareholders of Tyson Foods, Inc. prepare to vote on a resolution that would require the food giant to institute a “water stewardship" policy, new data shows the company regularly dumps a higher volume of pollution into waterways than companies like ExxonMobil and Dow Chemical.

The Environment America analysis shows Tyson and its subsidiaries released 104 million pounds of pollution to surface waters from 2010 to 2014, nearly seven times the volume of surface water discharges by Exxon during those years.

The Toxics Release Inventory does not include other sources of pollution from Tyson's supply chain, such as manure from factory farms that raise chickens and other livestock for the company. Photo credit: Shutterstock

“Tyson is dumping a huge volume of pollution into our waterways," John Rumpler, senior attorney with Environment America, said. “That's why Tyson's shareholders should vote to ensure that the company cleans up its act."

Filed by the American Baptist Home Mission Societies, with four investor co-filers from the Interfaith Center on Corporate Responsibility, the resolution considered at Tyson's annual meeting in Springdale, Arkansas would require the company to “reduce risks of water contamination" from its thousands of facilities, suppliers and contractors across the U.S.

“Water is more than a community issue; access to clean, refreshing, life-giving water is a human right," Michaele Birdsall, treasurer and deputy executive director of the American Baptist Home Mission Societies, said. “Because we continue to be as committed to the environmental and social performance of the companies in our investment portfolio as we are to their financial performance, we offer a resolution for a vote by all Tyson shareholders that addresses the availability of clean and safe water for all people. Corporate policies that protect water in communities where they operate are fundamental to corporations' social responsibility to society."

The data by Environment America comes from the Toxics Release Inventory, the federal government's database of self-reported releases of pollutants into the nation's waterways.

Much of the pollution from Tyson's facilities is in the form of nitrate compounds, which can contribute to algal blooms and dead zones and also pose threats to human health, including “blue baby syndrome" for infants.

The Toxics Release Inventory does not include other sources of pollution from Tyson's supply chain, such as manure from factory farms that raise chickens and other livestock for the company. For example, Maryland state officials estimate that massive chicken operations on the Eastern Shore produce 228,000 tons more manure than can be applied to local fields without polluting nearby waters such as the Chesapeake Bay.

Environment America said Tyson Foods and other agribusinesses should reduce their water pollution by taking responsibility for manure from factory farms, requiring comprehensive efforts to minimize fertilizer runoff wherever grain is grown for their livestock and cutting direct discharges of nitrates and other compounds at processing plants.

“If we want clean water in our rivers, our bays and our drinking water sources," Rumpler said, “companies like Tyson will have to dramatically cut pollution from their operations."