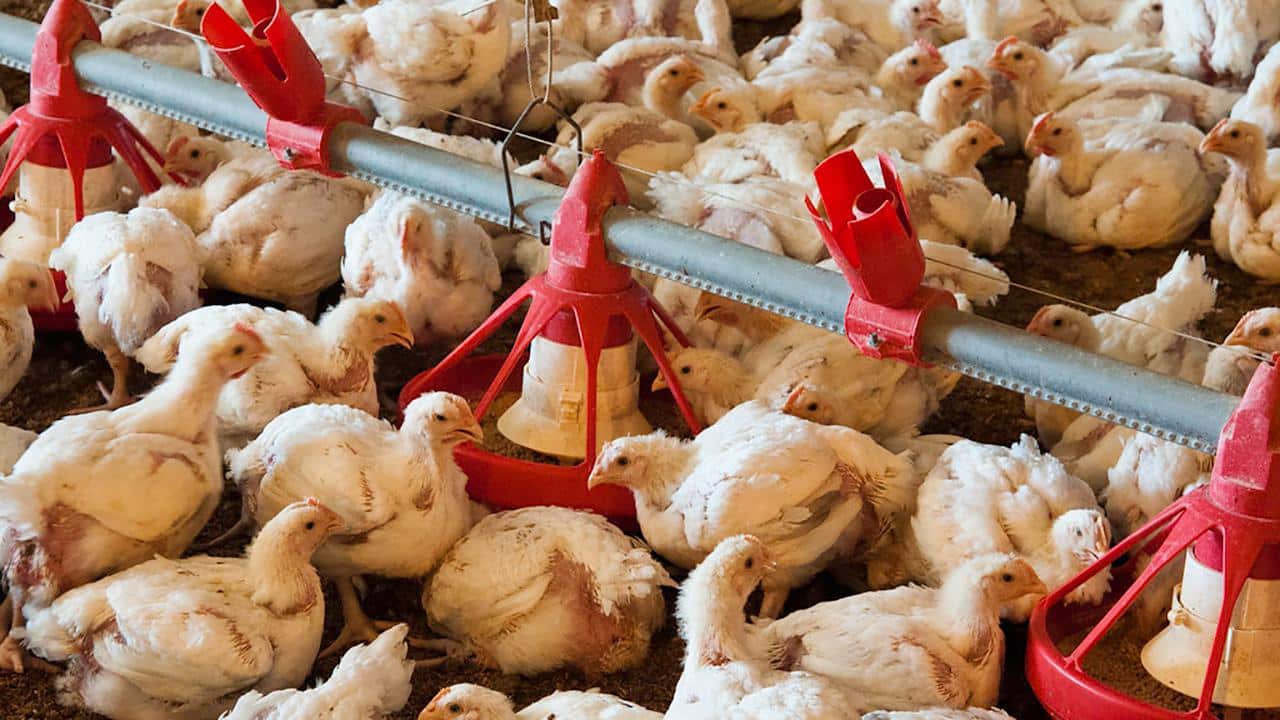 The miserable ones: Young broiler chickens at a feeder. The poor treatment of the chickens within its supply chain has made Tyson the target of public campaigns urging the company to make meaningful changes. U.S. Department of Agriculture / Flickr

The actions of the U.S. meat industry throughout the pandemic have brought to light the true corruption and waste that are inherent within our food system. Despite a new wave of rising COVID-19 cases, the U.S. Department of Agriculture recently submitted a proposal to further increase “the maximum slaughter line speed by 25 percent,” which was already far too fast and highly dangerous. It has been made evident that the industry will exploit its workers and animals all to boost its profit.

The revelations continued when Tyson Foods, the world’s second-largest producer of chicken, beef and pork, cooperated with the Department of Justice to avoid scrutiny into the company’s role in the monopolization of the industry to fix prices of chicken for both consumers and retailers. This news comes at a time when Tyson has already been under fire for exposing its workers to an enormous risk of contracting COVID-19. We can now add competitors and consumers to the ever-growing list of those victimized by the corporate giant. This is further evidence that it’s time for our nation’s food supply chain to change in a big way.

Tyson Foods former CEO Noel White, replaced by Dean Banks in October, rushed to cooperate under the Department of Justice’s antitrust leniency program, stating, “I am proud to lead a company that took appropriate and immediate actions in reporting the wrongdoing we discovered to the Department of Justice.” What White failed to mention is that cooperating will afford Tyson protection from public scrutiny and legal fines, at the expense of its competitors.

Unethical business practices seem to be the norm for Tyson Foods. Due to a lack of proper safety measures and harsh attendance policies, more than 10,000 Tyson plant workers tested positive for the virus, substantially more than any other U.S. meat company. Before the pandemic, working on a meat processing line was one of the most dangerous jobs in the United States. Now, with the constant threat of COVID-19 looming over these elbow-to-elbow assembly lines, meat processing may be among the most deadly jobs in the world. Workers are not just getting sick from this virus—they’re dying.

The pandemic has led to major disruptions in the supply chain. While Tyson has not yet engaged in the mass “depopulation” of animals that other producers resorted to, in a typical week, the company slaughters an estimated 37 million chickens. The poor treatment of the chickens within its supply chain—including breeding birds to grow at such an unnaturally fast rate that they can’t even hold up their own bodies—has made Tyson the target of public campaigns urging the company to make meaningful changes.

More than 120 labor, food justice, animal welfare and environmental organizations have banded together to take action against the company. Tyson must take immediate action to protect the safety and well-being of its workers, make improvements to support animal welfare and reduce its harsh impact on the environment.

For too long, the unethical, avaricious practices of the meat industry have been hidden from view. The scandals surrounding Tyson and other major producers are making clear that vulnerable workers, abused animals and a rigged system are the foundation of an unethical and destructive business model.

Tyson had a role in creating the industrialized system, and it must step up its role in fixing it. The meat giant has had one singular focus since its inception: profit. The company’s greed has caused it to exploit anyone in its path. Tyson’s disregard for human and animal life extends to its workers, animals killed in its plants, consumers and now its competitors. Tyson took ownership for rigging the system using price-fixing. It’s time for Tyson to take ownership for exploiting and endangering its more vulnerable victims as well.

David Coman-Hidy is president of The Humane League, a global nonprofit working to fix our broken food system and end the abuse of animals raised for food.