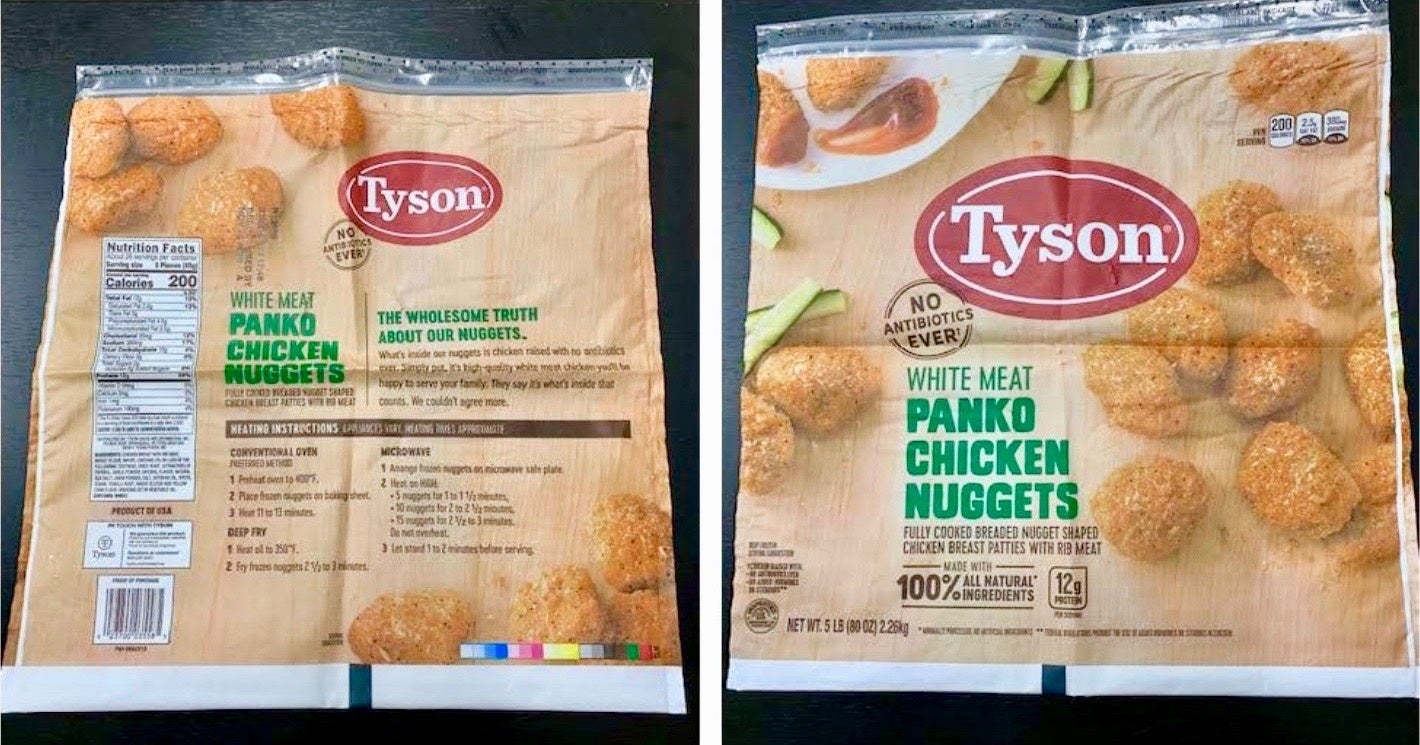 All those chickens! Every time we get these massive meat recalls I think of the poor animals that died for no reason.

This month, two of the nation’s largest chicken companies, Tyson and Perdue, have together pulled more than 120,000 pounds of nugget products from shelves and freezers.

Tyson Foods is recalling approximately 36,420 pounds of chicken nugget products because they may be contaminated with rubber, the U.S. Department of Agriculture’s (USDA) Food Safety and Inspection Service announced Tuesday.

Customers complained after they found pieces of “soft, blue rubber” inside, the Associated Press reported. Apparently, the rubber came from a piece of equipment that got pinched and made its way into the nugget blend, a Tyson representative explained to the AP, adding that the company has placed measures to prevent another such snafu.

Tyson Foods is recalling more than 36,000 pounds of chicken nuggets because they may be contaminated with rubber.

Specifically, Tyson’s recall applies to 5-pound packages of white meat panko chicken nuggets produced on Nov. 26, 2018, the notice said. They have a “BEST IF USED BY” date of Nov. 26, 2019 and a case code of 3308SDL03 and bear establishment number “P-13556” inside the USDA mark of inspection. These plastic-wrapped packs were shipped to retail locations nationwide.

Perdue recalled 16,011 pounds of “Fun Shapes Chicken Breast Nuggets” due to misbranding and undeclared allergens, the USDA announced Monday. The dinosaur-shaped products contain milk, a known allergen, which is not declared on the product label.

A week before that, Perdue also recalled 68,244 pounds of its “Simply Smart Organics Gluten Free Chicken Breast Nuggets” due to possible contamination with pieces of wood.

Let’s do some math. Say the average weight of a broiler chicken is 6 pounds before slaughter. Take away the parts of the chicken we don’t eat, plus breading and whatever else is used in nugget mix—oh and wood and rubber scraps—my back-of-the napkin calculations say that’s roughly 20,112 chickens that were killed for food that will go uneaten. That figure may be wildly inaccurate but these recalls always deal in pounds instead of the number of lives.

It’s not even the end of January, folks. Anyone else want to extend Veganuary for another month?