Typhoon Goni, One of the Strongest Storms on Record, Slams the Philippines 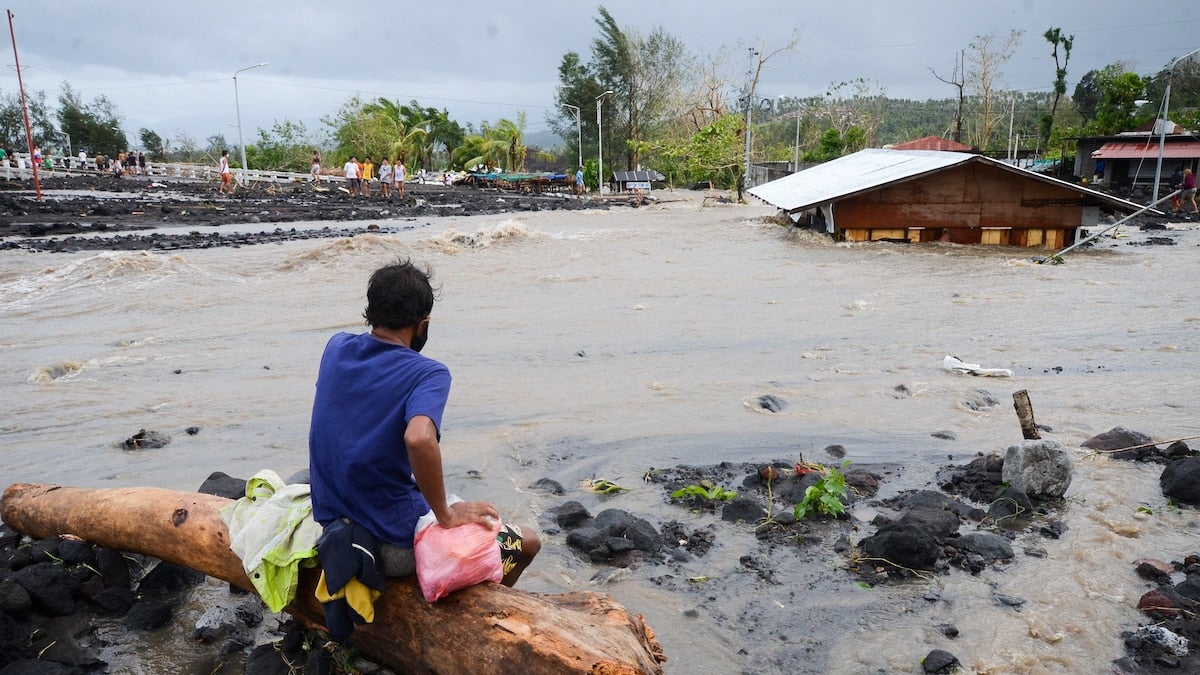 A man looks out at a home submerged in flood waters following Typhoon Goni's tour of destruction through the Philippines. Xinhua / STRINGER via Getty Images

Typhoon Goni, one of the most powerful storms on record, slammed into the Philippines Sunday, displacing hundreds of thousands of people and killing at least 16.

The storm came as the Philippines grapples with one of the worst coronavirus outbreaks in Southeast Asia, which complicated evacuations. The country has reported more than 383,000 cases and more than 7,200 deaths, according to The Guardian.

“This typhoon has smashed into people’s lives and livelihoods on top of the relentless physical, emotional and economic toll of Covid-19,” Philippine Red Cross chairman Richard Gordon told The Guardian.

This is the sound of one of the strongest storms ever witnessed on Planet Earth.

The storm destroyed tens of thousands of homes and displaced around 370,000 people, BBC News reported. Two million people were impacted overall and more than 100 towns and cities lost power, according to The Washington Post. The cost in crop damage stood at more than million, impacting around 20,000 farmers.

Just before it made landfall on Catanduanes Island Sunday, the storm had winds of 195 miles per hour, making it the equivalent of a Category 5 hurricane. However, passing over the island weakened the storm, and by midday it was the strength of a Category 4 hurricane. It was downgraded to a tropical storm by the end of the day, The New York Times reported.

On Catanduanes Island, the storm killed at least six people and cut off water, electricity and cell phone coverage, the Philippine Red Cross told BBC News. In the town of Virac, the first major population center in the storm’s path, the Red Cross estimated that 80 to 90 percent of the buildings were damaged.

The storm then moved on to the Philippines’ most populous island of Luzon, home to the capital of Manila. However, the storm largely spared the capital, The New York Times pointed out. Instead, the Bicol region took the brunt of the damage.

In Bicol’s Albay Province, southeast of Manila, Governor Al Francis Bichara said it was “probably the strongest storm I have seen,” according to The New York Times.

“In our district, roofs were flying,” he said.

At least 10 people died in Albay Province, BBC News reported, including a five-year-old boy. Two people drowned, one was crushed by a tree and one was caught in volcanic mud.

Volcanic debris also buried more than 300 homes in the province. Congressman Zaldy Co said on Facebook that several people were feared to have been buried alive.

Goni is the fourth typhoon to impact the Philippines within the past month, The Guardian pointed out. It comes just a week after Typhoon Molave killed 22 people and displaced 120,000. And another storm, Atsani, is currently strengthening and has the Philippines in its path.

Overall, the Philippines weathers an average of 20 typhoons and tropical storms every year, according to The New York Times. This year, it has endured 18 so far. But the climate crisis is making the situation even worse as the warm waters surrounding the Philippines heat even further, increasing the frequency and intensity of storms. In fact, the Philippines is one of the countries most vulnerable to the impacts of climate change, and this has not been helped by massive deforestation that removes natural flood barriers and wind breaks.

“Climate change is a big international idea, but we are facing this on the local level and we aren’t equipped with enough progressive vision for it,” Dakila Kim P. Yee, a sociologist at the University of the Philippines Visayas Tacloban College, told The New York Times.

Typhoon Goni also intensified rapidly, a process that is fueled by warming ocean waters, The Washington Post pointed out. Its winds went from less than 100 miles per hour Thursday to almost 180 miles per hour Friday, and by Sunday they were at 195 miles per hour. During this time, the water fueling the storm was two to three degrees warmer than normal.

At its peak, it was the strongest storm in four years, with winds comparable to 2016’s Typhoon Meranti and 2013’s Typhoon Haiyan, which killed more than 6,000 people in the Philippines.