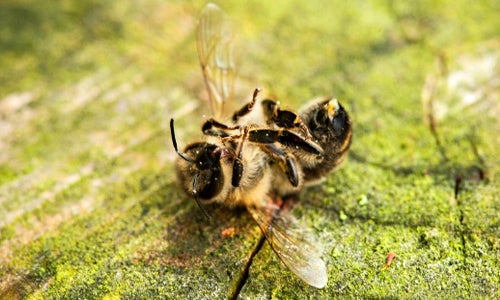 Once again, new reports have surfaced providing more evidence that the destructive use of pesticides in large-scale agriculture must be stopped in order to protect the plummeting global bee population due to Colony Collapse Disorder (CCD). 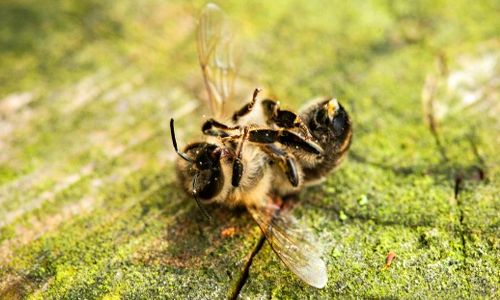 There is an urgent need to stop the widespread use of bee-killing pesticides. Photo credit: Greenpeace / Fred Dott

The first study, from Harvard School of Public Health, found that two widely used neonicotinoids appear to significantly harm honeybee colonies over the winter, particularly colder winters. The study—which replicated a 2012 study from the same research group, that came to a similar conclusion—links low doses of the neonicotinoids imidacloprid and clothianidin to CCD and finds that “bees from six of the 12 neonicotinoid-treated colonies had abandoned their hives and were eventually dead with symptoms resembling CCD,” while those colonies not exposed to the neonics survived their hibernation.

Since 2006, CCD has emerged as a serious problem threatening the health of honeybees and the economic stability of commercial beekeeping and crop production in the U.S., as bees are the prime pollinators of roughly one-third of all crops.

“We demonstrated again in this study that neonicotinoids are highly likely to be responsible for triggering CCD in honeybee hives that were healthy prior to the arrival of winter,” said lead author Chensheng (Alex) Lu, associate professor of environmental exposure biology at Harvard School of Public Health.

The second study, from Greenpeace, illustrates concrete ways to protect bees and agriculture, and concludes that ecological farming is the only way out of the crisis.

With pesticide and agrochemical companies pushing propaganda to dissuade the public of the negative effects of neonicotoinds and other harmful pesticides, and the U.S. Environmental Protection Agency failing to properly address the situation, studies such as these are vitally important to the survival of our most important pollinators.

7 PR Tricks Pesticide Companies Use to Spin the Bee Crisis