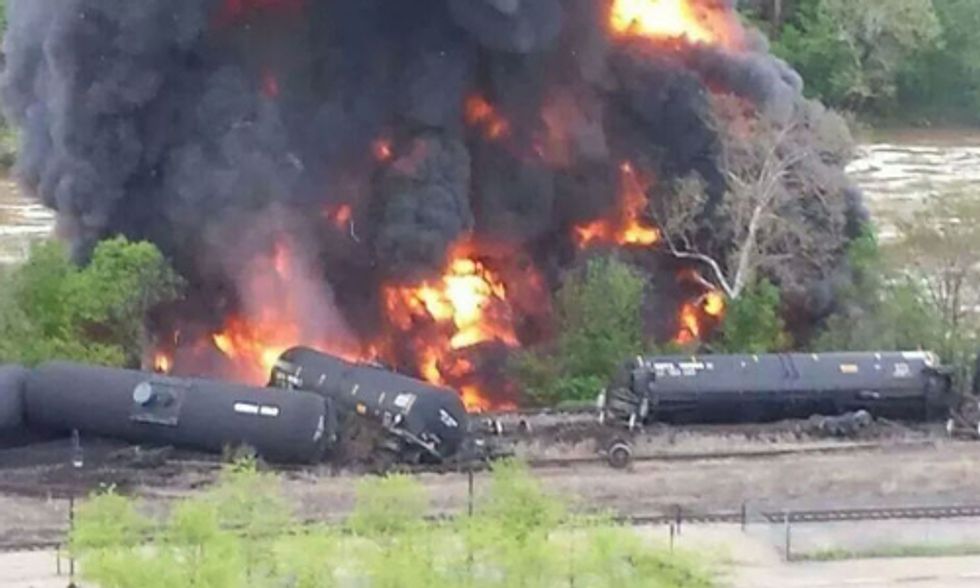 Within the last several days, two trains carrying volatile crude oil derailed and caught on fire. These accidents highlight the danger of government foot-dragging over train safety and show that towns seeking to ban these trains coming through their area aren't just being contentious and "anti-business."

Take a look. This is a picture sent to us by a viewer of the train derailment/ fire in Fayette County. pic.twitter.com/kPHxNdSMHa

Yesterday a 109-car train carrying fracked oil from the Bakken shale formation in North Dakota derailed in Fayette County, West Virginia, with several cars catching on fire and at least one plunging into the Kanawha River. A house was consumed by fire, two towns were evacuated and West Virginia governor Earl Ray Tomblin declared a state of emergency for two counties. The West Virginia Department of Health and Resources posted on its website: "The West Virginia Department of Health and Human Resources Bureau for Public Health today announced water intakes in Montgomery and Cedar Grove have been closed following a train derailment that occurred in Fayette County. The train was carrying crude oil, some of which has spilled into the Kanawha River. While the intakes are closed, customers are urged to conserve water."

“Incidents like this one are yet another warning that our entire region is at risk," said Betsy Nicholas, executive director of Waterkeepers Chesapeake. "Our rail systems, suffering from years of delayed maintenance, were not made for this highly volatile cargo. The rail companies are fighting the states to keep the information from the public. Meanwhile, these crude oil train derailments continue unabated. All indications are that the U.S. DOT will allow transport of Bakken crude with these flawed railcars for the foreseeable future."

Saturday evening, a 100-car train carrying tar sands oil from Alberta derailed in a remote area near Timmins, Ontario and caught fire. According to Canada's Globe and Mail, "The train was visually inspected and went through a checkpoint that automatically detects mechanical problems 20 miles before the derailment. The track was visually inspected on Saturday and cleared by a rail flaw detector in the past week."

While the remote area where the derailment occurred meant it didn't threaten any communities, passenger rail service between Toronto and Winnipeg had to be suspended until the wreck was cleared. Another train carrying crude oil derailed in southern Alberta, Canada Saturday morning, but no oil leaked in that derailment.

"Back-to-back fiery derailments involving crude oil trains should be an unmistakable wake-up call to our political leaders: Stop these dangerous oil trains and stop them now,” said Mollie Matteson, a senior scientist with the Center for Biological Diversity. “People’s lives are at stake, clean drinking water is at stake, and the well-being of towns and wildlife along thousands of miles of rail line are directly in harm’s way of this unchecked, reckless increase in oil transport by rail.”

These are only the latest in a string of derailments, and no, it's not your imagination that they are becoming more frequent. In 2008, railroads carried 9,500 carloads of crude oil; in 2013, they carried more than 435,000 carloads. In the first half of 2014, 258,541 carloads were delivered. And rail imports of Canadian crude oil to the U.S. have increased 20 times since 2011. And as carloads skyrocketed so did accidents. As a result, more oil was spilled from railroad cars in 2013 than the entire period from 1975-2012.

“Federal officials continue to endanger the safety of our communities and our drinking water by failing to enact reasonable regulations for the rail transport of crude oil, which has increased 4000% in the last six years," said Robert Kennedy, Jr., president of Waterkeeper Alliance. "Taking their signals from carbon tycoons, federal regulators are sitting on their hands while our rail infrastructure crumbles, bridges collapse and substandard tank cars derail and explode, incinerating homes, poisoning waterways and threatening the drinking water of millions of Americans. Over two frightening weeks, this greedy industry has been responsible for derailments in West Virginia, South Carolina and Ontario. Fires are still burning after the crashes in Ontario and West Virginia. It's time for us to light a fire under federal Department of Transportation officials, and to let them know that they are working for American taxpayers and not the Koch brothers."

The most deadly and dramatic derailment occurred in Lac-Mégantic, Quebec, on July 6, 2013 when the braking system of an unattended 74-car train carrying Bakken crude oil failed, caused the train to roll into the heart of town at high speed, jump the tracks and blow up, destroying 30 buildings and killing 47 people.

But the frequency with which these derailments are occurring suggest it's only a matter of time until another Lac-Megantic —or worse.

The January 2014 derailment of seven train cars including a tanker near Philadelphia, leaving two cars hanging precariously off a bridge and forcing the closing of the Schuylkill expressway, a major highway serving the Philadelphia area. While no oil leaked in that accident, some of the cars were carrying crude oil.

The February 2014 derailment of a 19 cars of a 120-car train carrying Canadian crude in Western Pennsylvania. There was no fire in that case; however, thousands of gallons of oil were spilled.

The April 2014 derailment in Lynchburg, Virginia was one of last year's most dramatic when 15 cars of a train carrying crude oil derailed in downtown Lynchburg, sending a huge firebomb spiraling over the city and spilling around 50,000 gallons of oil into the James River.

Just a few weeks later, in May 2014, a train carrying 28,000 gallons of crude oil derailed in Weld County, Colorado, about 45 miles north of Denver, with six cars falling off the tracks and breaking open, spilling fracked crude from the Niobrara shale play along the banks of the South Platte River. It was kept out of the river by an earthen berm, and Union Pacific Railroad said "only" 6,500 gallons had leaked.

When a train derailed and exploded in the heart of Lac-Mégantic, Quebec, 47 people perished, spotlighting the danger of oil trains passing through populated areas.
Photo credit: Shutterstock

While in most cases, the damage has been minimal so far, the frequency of the derailments has ignited arguments about the safety of train tanker cars and their passage through heavily populated areas. The train that exploded in Lac-Mégantic had earlier passed through Toronto.

A California legislator, State Senator Jerry Hill, sent a letter to Governor Jerry Brown in December, requesting that trains carrying Bakken crude be banned from 19 of the most hazardous sections of the state's tracks, following the derailment of a train carrying grain which spilled into the Feather River.

"This incident serves a warning alarm to the state of California," he wrote. "Had Tuesday's derailment resulted in a spill of oil, the spill could have caused serious contamination in the Feather River, flowing into Lake Orville and contaminating California's second largest reservoir that supplies water to millions of people."

The high rate of failure among the DOT-111 tanker cars that have been standard for carrying hazardous cargo has long been noted, and now both the U.S. and Canada have come to the conclusion they should be replaced by newer tank cars less susceptible to the punctures that cause the leaks and explosions. Debates have raged about how quickly the industry should be forced to phase out the old cars and comply with new standards. Canada issued new rules last July, requiring that DOT-111s built before 2014 be phased our or retrofitted before May 2017 and has proposed aggressive new safety standards the industry would like to see delayed until 2020. The U.S. Department of Transportation (US-DOT) closed its comments on its proposed new regulations in September.

The American Petroleum Institute said that the timeline for phasing out or upgrading the cars would be too costly, calling the rules "overreacting." But environmental groups Scenic Hudson and Riverkeeper submitted a 76-page document to US-DOT asking for even more stringent rules.

“Put simply, these rules won’t stop the next bomb train disaster,” said Riverkeeper president Paul Gallay. “We deserve real protection for communities and the environment—not a rule that defers to the rail and oil industries at every turn.”

Meanwhile, Earthjustice is representing the Sierra Club and Forest Ethics in a lawsuit against US-DOT, demanding that DOT-111's carrying volatile crude oil be decommissioned immediately.

“More than 25 million Americans live within a mile of a railroad track that could be hauling explosive crude oil, and towns and emergency responders across the country are calling for action,” said Matt Krogh, ForestEthics extreme oil campaign director. “We are challenging the administration to ensure that the oil industry, railroads, and the federal government do not wait to take these dangerous tanker cars off the rails.”

This Year's E-Waste to Outweigh Great Wall of China