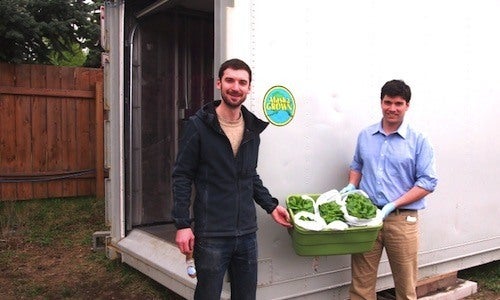 How do you turn Alaska’s icy tundras into lush, year-round farms? Two forward-thinking startups just might have found the solution: growing indoors.

While their farming approaches are very different, the two companies have similar ambitions. Each fills Alaska’s fresh food gap by cutting the distance that food has to travel to Anchorage’s plates, all while providing healthy, nutritious food options to residents.

Due to weather constraints on the growing season, Alaska imports approximately 95 percent of its food. Its produce comes from farms in California or Mexico—fruits and vegetables are picked before ripening so it doesn’t spoil during its many weeks of transport, The New York Times reported.

Consequently, fresh produce is usually much pricier for Alaskans. “I’ve seen $10 heads of lettuce in stores, so I think the economics of this project will work,” Danny Consenstein, head of the U.S. Department of Agriculture’s farm service agency in Alaska, told Alaska Dispatch News.

In all, the units are capable of producing 1,800 plants at a time in mineral-rich water without soil, Janes said. So far, the company has sold two units in Anchorage.

Alaska Natural Organics has also marked its first deliveries, with roughly 100 basil plants delivered to a handful of Alaskan grocery stores in the first week of December 2015, the Associated Press reported.

According to KTVA Alaska, when operations at Alaska Natural Organics are finally running at full capacity, the 5,000-square-foot organic farm will be able to house 20,000 plants.

only complaint we had from a client was that it was too pretty to eat,” Winford said.