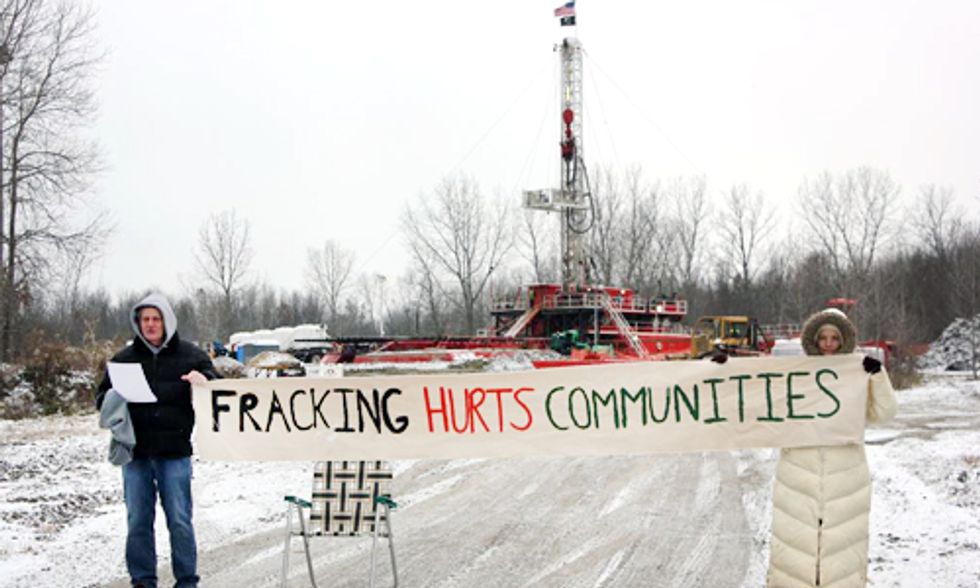 Two Youngstown, OH community members were arrested today at a nonviolent protest and rally at a fracking wastewater injection well site in Niles, OH. The two protesters were arrested for blocking trucks from entering the well site while holding a “Fracking Hurts Communities” banner. More than 50 people from Ohio and Pennsylvania attended the rally.

“The state of Ohio has refused to protect its communities from fracking," said Chris Khumprakob, who was arrested during the protest. "Hydraulic fracturing is poisoning our community and endangering our health, so we've come together today as a community to symbolically cleanse our water and take a stand for our health. The state government won't protect our well-being, so we've decided to protect it ourselves,”

Despite the harmful effects of injection wells, including poor air quality and contaminated drinking water, the state of Ohio has so far sided with fracking companies, according to members of FrackFree Mahoning Valley.

Fracking wastewater injection wells have been linked to many earthquakes, including a magnitude 4.0 earthquake in Youngstown on New Year's Eve in 2011 and more than 11 subsequent earthquakes since the placement of injection wells in the area. Last year, Weathersfield Township and the City of Niles banned injection wells, but the Ohio Department of Natural Resources (ODNR) still permitted this well. According to Ohio Revised Code, the ODNR has “sole and exclusive authority” to permit drilling operations in the state, regardless of what is agreed upon at the local municipal level.

“The Weathersfield Township trustees and Niles city council are attempting to protect the health and safety of our residents by banning injection wells, but the state of Ohio won’t listen to them," said John Williams, a McDonald, OH resident that was arrested at the protest.

"This is just another example of the state government choosing corporate wealth over community health. We stand together with our city council to say that we do not want this toxic trespasser put in place.”

While Williams and Khumprakob blockaded the road leading to the well site, the rest of the protesters participated in a water blessing led by Reverend Monica Beasley-Martin.

“Clean water is essential for mankind’s continued survival," said Rev. Beasley-Martin. "Like the Prophet Jeremiah before me, there is a burning fire, shut up in my bones, that compels me to speak out against this planned destruction of our water supply. We are not expendable!”

The residents of Niles do not stand alone in their efforts to ban fracking. Today’s event is just one example of a broad-based movement sweeping across Ohio and many other parts of America. Legislation has been introduced in the Ohio House of Representatives to ban fracking wastewater underground injection wells until Jan. 1, 2015.