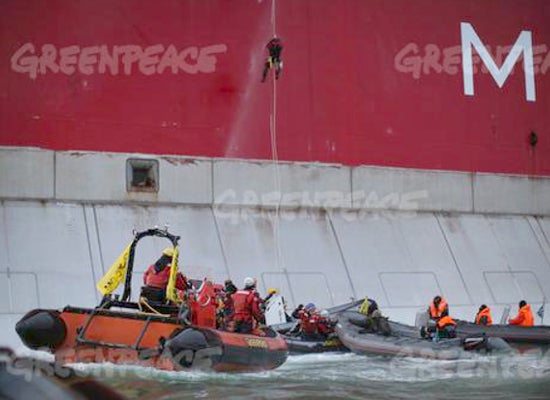 Two Greenpeace International activists have been arrested after climbing a Gazprom oil platform in the Russian Arctic, during a peaceful protest that has prompted a disproportionate use of force by the Russian Coast Guard. 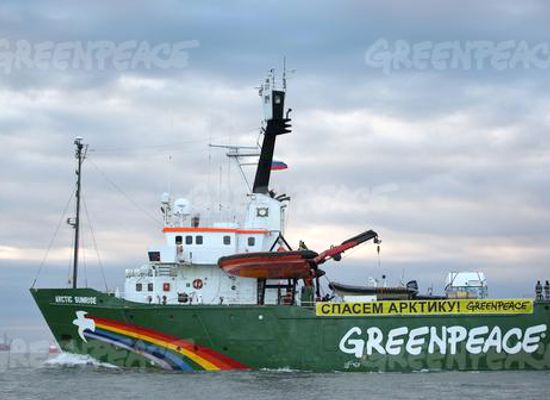 Now there are no climbers remaining on the platform, but the Greenpeace International icebreaker Arctic Sunrise remains in the area. The two are now in custody on the Russian Coast Guard vessel.

Crew members of the Arctic Sunrise reported that a total of 11 warning shots have been fired across the ship and the coast guard has threatened to fire at the ship itself if it does not leave the area immediately. 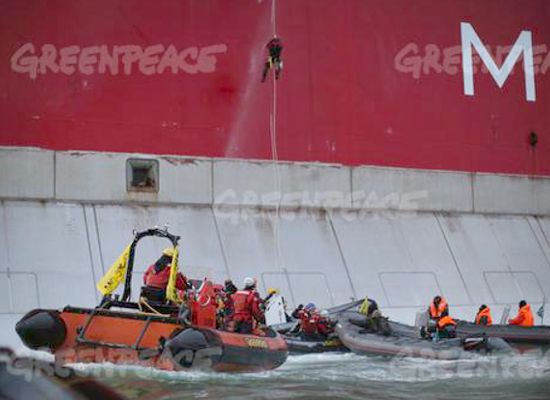 The Russian Coast Guard has requested to board the Arctic Sunrise but has been refused permission by the ship’s captain. Greenpeace International maintains that such a boarding is unjustified and illegal.

“Employing this level of force against a peaceful protest ship is completely disproportionate and should stop immediately,” said Ben Ayliffe, head of Greenpeace International’s Arctic oil campaign. “It’s clear that oil companies receive special protection from the Russian authorities, who seem more interested in silencing peaceful activists than protecting the Arctic from reckless companies like Gazprom.” 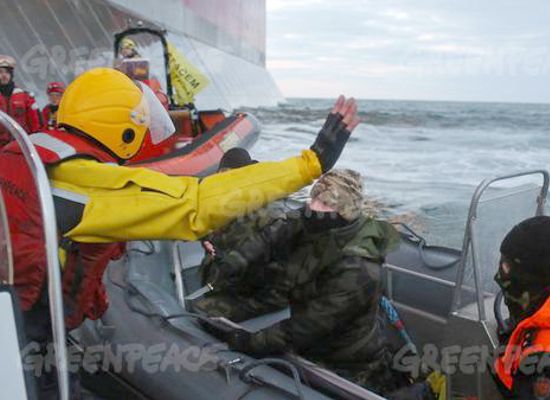 A Russian Coast guard officer is seen pointing a knife at a Greenpeace International activist. This is one example of the disproportionate use of force by the Russian authorities during a peaceful protest. Photo credit: Denis Sinyakov/ Greenpeace

“Let’s be absolutely clear about this: the real threat to the Arctic comes not from Greenpeace International but from oil companies like Gazprom that are determined to ignore both science and good sense to drill in remote, frozen seas,” Ayliffe concluded.

At 4:30 a.m. Moscow time this morning, five inflatable boats were launched from the Greenpeace International ship Arctic Sunrise and headed towards the Gazprom oil rig Prirazlomnaya, in the remote Pechora sea, in protest of offshore drilling in the Arctic. 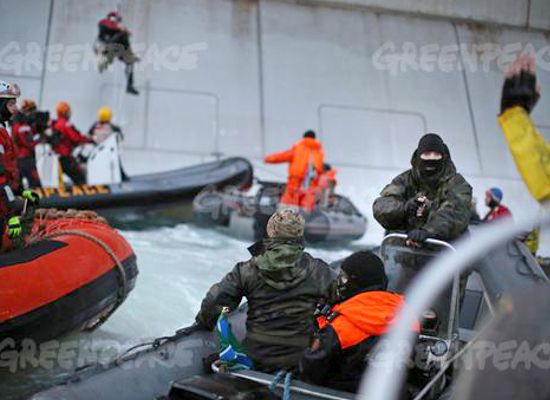 A Russian Coast guard officer is seen pointing a gun at a Greenpeace International activist. Another example of the disproportionate use of force by the Russian authorities during a peaceful protest. Photo credit: Denis Sinyakov/ Greenpeace

Gazprom plans to start production from the Prirazlomnaya platform in the first quarter of 2014, raising the risk of an oil spill in an area that contains three nature reserves protected by Russian law. Greenpeace occupied the same platform in August 2012 with activists including the organization executive director, Kumi Naidoo.