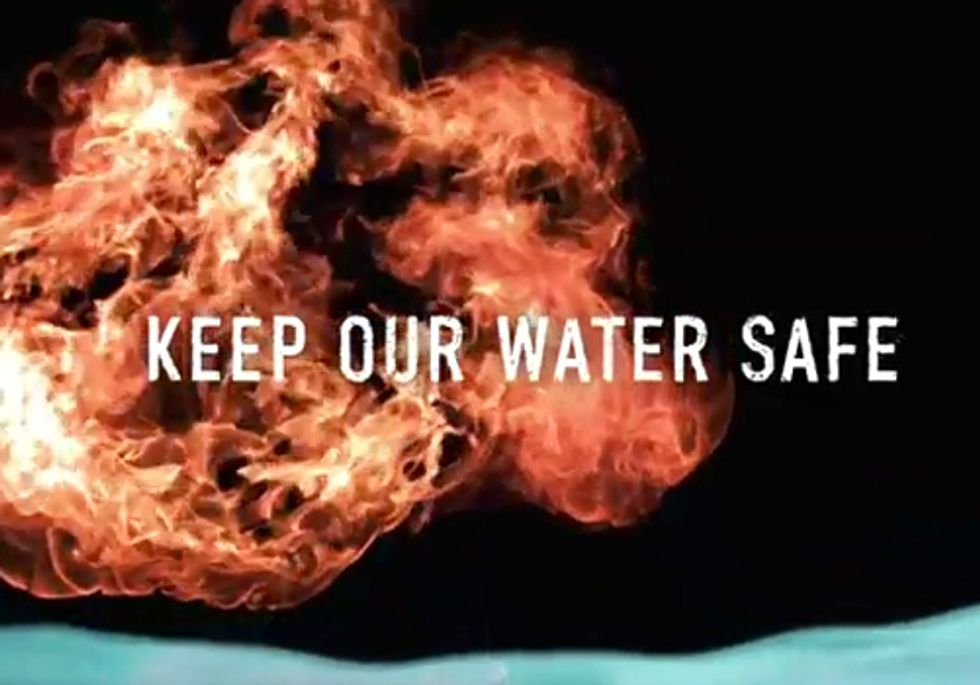 Delaware Riverkeeper Network is placing a thirty second public awareness ad on cable television again this week seeking to break the gas and oil industry’s grip on media advertising with a goal of raising awareness and spurring viewers to action. The ad will air from Aug. 20 to Aug. 26 in regions of New York State underlain by shale gas deposits. A map below shows the counties that will be covered by cable TV stations headquartered in Binghamton, Elmira, Utica and Sullivan County, primarily located in New York’s Southern Tier and parts of the Catskills. The ad will air on MSNBC, HGTV and Lifetime.

“In an effort to expose the terrible impacts of fracking and gas development infrastructure, Delaware Riverkeeper Network is investing in this creative effort to reach into the homes of New Yorkers to let them know the imminent dangers at hand and what they can do to influence what will happen,” said Delaware Riverkeeper Maya van Rossum. “It’s unfair that the deep pockets of energy corporations allow them to dominate popular airwaves and as a result to overwhelm the public discourse with distortions and falsehoods. We don’t have their money but with our limited resources, we’re trying to break their media stranglehold and let people know they can do something about this,” said van Rossum.

For years, when the public heard about natural gas drilling and fracking, it was likely that they did so from the oil and gas industry through the ad campaigns of Exxon and Chesapeake, and industry lobbying groups like American Petroleum Institute and American Natural Gas Alliance. When it came to the TV airwaves, industry has enjoyed a virtual monopoly with campaigns that overwhelm solid, objective news reporting that critically analyzes the claims of industry.

The ad connects the viewer to a dedicated website where action alerts and videos are posted. This week’s airing will focus on the Aug. 27 Don’t Frack New York Rally in Albany, NY, where thousands are planning to come together on the eve of a decision regarding whether New York’s fracking moratorium will be lifted to tell Governor Andrew Cuomo “Don’t Frack New York."