Turn Your Organic Waste Into Energy for Your Home 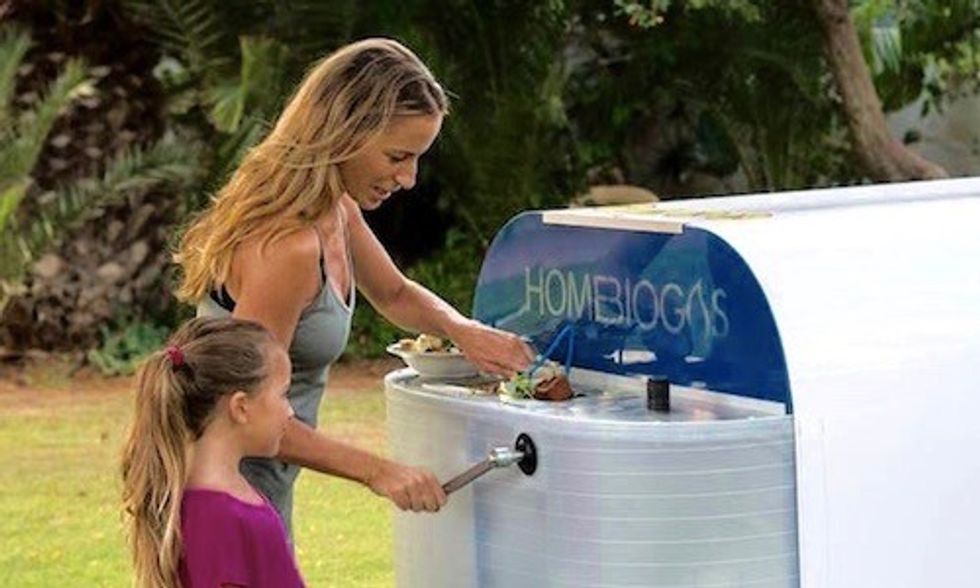 HomeBiogas, an Israel-based startup, has created an affordable and compact anaerobic digester that converts organic waste into cooking gas and liquid fertilizer. Home wastes like food scraps, kitchen trash and pet manure no longer have to go to waste.

Here's how it works: after the HomeBiogas system is fed organic matter, microorganisms break down the biodegradable material in the absence of oxygen. The end product is biogas and biofertilizer.

According to the company, you can input up to 6 liters (6 qt) of food waste or up to 15 liters (15 qt) of animal manure in HomeBiogas each day. Every liter of food waste produces about 200 liters of gas, or the amount needed to cooking over a high flame for one hour. On average, HomeBiogas produces 2-3 hours of cooking gas each day—enough for three meals.

The product's built-in tank stores 400 liters of gas. Additional gas generated by the system gets automatically released and dissipates into the atmosphere, the company says.

As for fertilizer, the HomeBiogas can produce between 5-10 liters a day.

The HomeBiogas seems like an environmental no-brainer. Not only does it reduce landfill waste and pollution, it's a renewable and local energy source which can save money on fuel at the same time.

The company also estimates that each year, the device eliminates one ton of organic waste and reduces the equivalent of six tons of carbon dioxide per one household.

"One of the major issues today around the world is waste management," Erez Lancer, HomeBioGas co-founder and COO, says in the video below. "Imagine being able to treat your own waste [and consume] the gas it creates."

"The magic of this system is [how we] bring bio-gas technology into private houses, allowing the consumer to create a closed circle of energy in-house," he adds.

There are some caveats. Because it's an outdoor system, you'll need a yard or space outside to put it. It also requires an average outdoor temperature of 64 degrees Fahrenheit for optimal results. For those who live in temperatures below freezing, the HomeBiogas will work if it's installed in a well ventilated and warm space such as a greenhouse.

But for the 1.3 billion people around the world who live without affordable and reliable energy sources, the HomeBiogas is a promising solution.

Even United Nations Secretary General Ban Ki-moon and Israel President Reuven Rivlin have stopped by the company to check out the system to give their stamp of approval.

“4.3 million women and children die each year due to indoors smoke from open fires," Ki-Moon said. "This is just the thing they need. The UN should be purchasing these units! They can save lives.”

In the video below, the company explains that 150 units have already been installed and have been running for over a year.

The company launched its Indiegogo campaign last Tuesday and reached its $100,000 fundraising goal in less than a day. The system costs roughly $995 through Indiegogo.

Thrilled to announce that we reached 100% of our Indiegogo campaign goal! Thanks to everyone who supported and shared! Lets #BringTheChange!
— HomeBiogas (@HomeBiogas)1448448331.0