Tug-of-War between Carrying Capacity and Rising Demand—Can We Keep This Up? 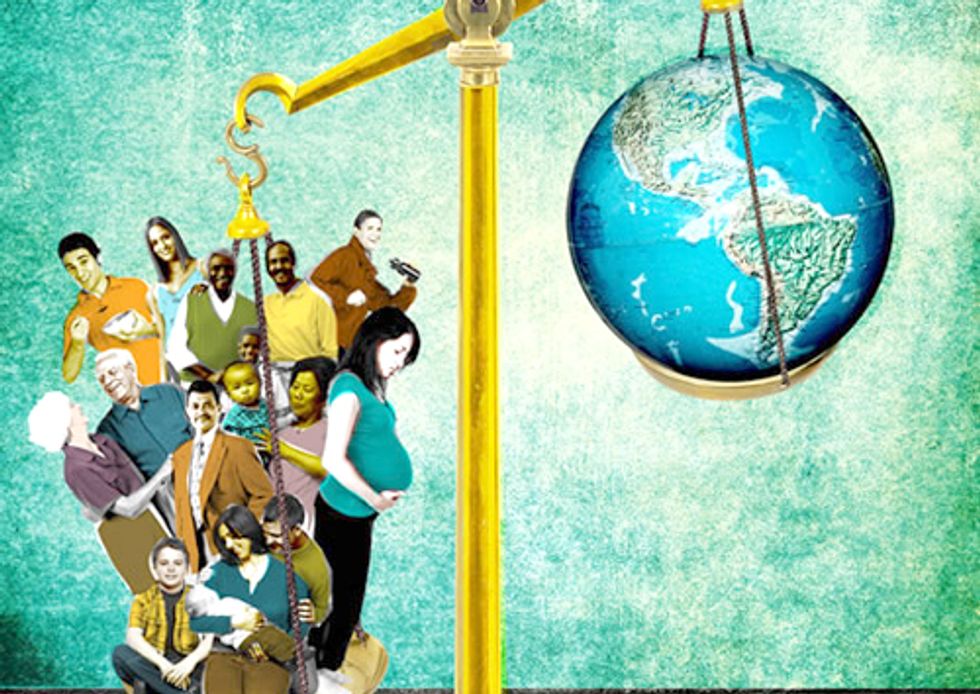 The global economy continued to grow last year, world population surpassed 7 billion and the use of energy and other natural resources generally rose. The Worldwatch Institute captures the impacts of this rising consumption and the increasingly risky state of humanity in Vital Signs 2012, the latest compilation of indicators from the Institute’s Vital Signs project. The Washington, D.C.-based environmental publisher Island Press released the book today as part of a new partnership with Worldwatch.

Vital Signs 2012 provides up-to-date figures on our most important global concerns. Drawing from international agencies and organizations and from Worldwatch’s own research, the report provides authoritative data and analysis on some of the most significant global trends, including population growth, renewable energy production and oil consumption.

“The information showcased in Vital Signs 2012 will inform governments, policymakers, NGOs and individuals about the current state of the world’s consumption patterns, economic priorities and environmental health, allowing for more well-informed policies and decision making,” said Michael Renner, Worldwatch senior researcher and director of the Vital Signs project. “Commitments are needed to reverse a number of harmful trends.”

Population growth combined with rising resource use, heavily tilted toward the world’s wealthy on a per capita basis but growing rapidly among the expanding global middle class, is reflected in rising worldwide resource consumption. Oil use reached an all-time high of 87.4 million barrels a day in 2011. Meat consumption increased 2.6 percent in 2010. Growing demand for timber translated into forested areas shrinking by 1.3 percent, or 520,000 square kilometers, from 2000 to 2010—an area roughly the size of France.

“The story that resource consumption is rising is hardly new,” said Worldwatch President Robert Engelman. “In fact, it’s an ongoing challenge to keep that critically important story fresh and interesting. But these rising trends will not last forever. They can’t. Their continued growth in our lifetimes reminds us how urgent it is to develop new ways of assuring decent lives and livelihoods for all—ones that do not result in increasingly negative impacts on the people and world around us.”

The use of biofuels, for example, can play a role in the transition to more sustainable lifestyles. The U.S. is the global leader in corn-based ethanol, yielding 49 billion liters annually, or 57 percent of the world output. Yet demand for this renewable energy source is a double-edged sword. Under the right circumstances, biofuels can be a less carbon-intensive alternative to fossil fuels. But using corn to make biofuels comes at the expense of its availability to be consumed as food, and rising demand for ethanol has pushed up the price of staple grains. In April 2011, the Cereal Price Index hit a record high of 265, reflecting a 5 percent price jump worldwide.

Vital Signs 2012 also highlights the rising consumption of animal protein, as well as destructive industrial livestock practices that help make this growth possible. As more people in developing countries enter the middle class, meat consumption is rising and the intake of processed meat is shifting to unhealthy levels. Meanwhile, the expansion of factory farming to meet increasing meat demand fosters the spread of diseases such as avian influenza, swine flu and mad cow disease.

Not all of the trends highlighted in the report are cause for concern, however. Increasing demand for more time-efficient transportation systems has led a growing number of countries to invest in high-speed trains, which release 80 to 120 fewer grams of carbon dioxide per passenger-kilometer than automobiles do. High-speed trains demonstrate how environmental efficiency can be congruent with consumer convenience.

Vital Signs 2012 analyzes the aforementioned trends and many more, using straightforward language and easy-to-read charts to explain global trends to governments, businesses and consumers, helping them to make more informed decisions for our future.