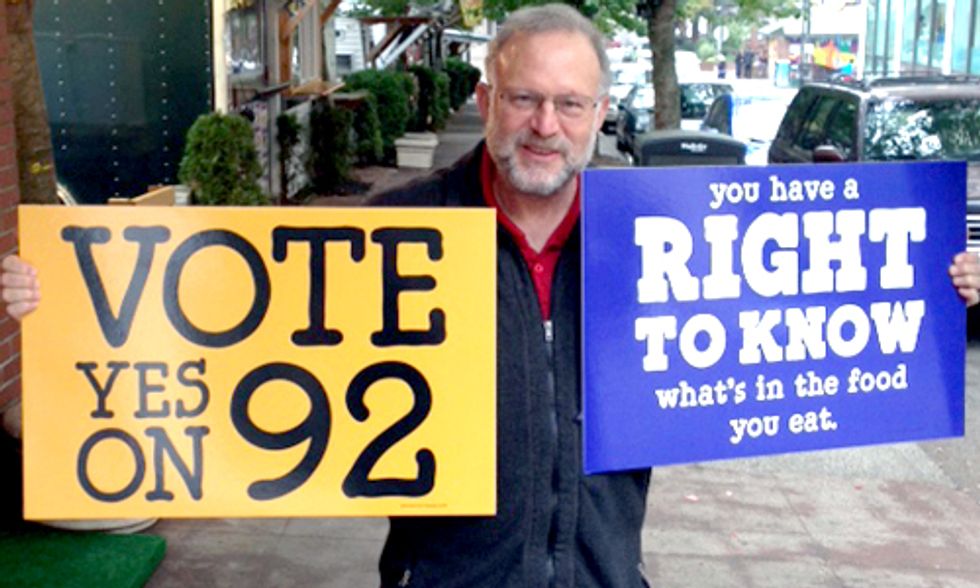 In California in 2012, a proposal to label foods containing GMOs was defeated after opponents, headed by Monsanto, spent $46 million to supporters' $9 million. Last year, opponents of labeling narrowly defeated a similar measure in Washington state, with supporters raising around $6 million and opponents ponying up more than $35 million million in a state with only about a quarter the population of California. Again, Monsanto was the largest single donor.

Now the issue—and the tsunami of money—is pouring into Oregon, where Measure 92, sponsored by Oregon GMO Right to Know, will be on the ballot this November. So far the spending hasn't been as outsized as that in California and Washington, with supporters raising more than $4 million and opponents raising more than $7 million to date with the promise to spend more. And—surprise!—so far, Monsanto has been the biggest single donor, although the Grocery Manufacturers Association, which represents multiple donors, has given more.

But there are signs that this time might be different. Earlier this year, voters in a pair of rural Oregon counties considered to be fairly conservative banned GMO crops due to farmers' concerns about non-GMO crops becoming contaminated by wind-borne GMOs. And both the Republican and Democratic candidates for governor support the labeling initiative.

The labeling campaign got a couple of boosts last week. It was endorsed by the Eugene Register-Guard, one of the state's most influential newspapers, which opposed a similar measure 12 years ago, in an op-ed titled "Approve Mandatory Labeling." It said that whether or not GMOs are safe as big industrial food companies claim, if consumers think there's a problem, they deserve to know what's in their food, adding, "One of opponents’ most curious arguments is that labels would stigmatize GMO products—but why would that be the case if they’re safe and already accepted by the general public?"

On a lighter note, Vermont-based Ben & Jerry's ice cream announced it would rename its fudge brownie ice cream "Food Fight Fudge Brownie" in its five Oregon shops to call attention to the labeling initiative. Company co-founder Jerry Greenfield toured Oregon this week, visiting all five of the company's locations there.

"It's about  the consumers right to know," said Greenfield at a stop at their store in Bend, Oregon."It's not about do you like GMOs or don't like GMOs. It's simply about telling consumers what is the food they're buying and eating so they can make  a choice. I think any food company ought to be proud of they ingredient they use and they ought to be thrilled to tell people about them."

The arguments of opponents have been recycled from the previous campaigns. They say there would be an increased cost to labeling that would increase the cost of food products astronomically. But many large food companies already label foods for export to the 64 countries—including all EU countries and Japan—that require it. Supporters point out that cost increases haven't occurred in any of these other countries and that companies routinely change their labels for marketing reasons. They've also said that labeling would "confusing" for shoppers and unfairly stigmatizes products that contain GMO ingredients, despite the plethora of other information already required on labels and the fact that no warning language would be required—just information.

Colorado also has a GMO labeling issue, proposition 105, on the ballot this November, although it's gotten less attention and is considered less competitive. Supporters are being drastically outspent. According to Colorado Public Radio, Monsanto alone has pitched in $4.7 million, while supporters of labeling have raised only $323,ooo. And while Denver-based Chipotle has come out in support of the proposition, the state's largest newspaper the Denver Post has editorialized against it.