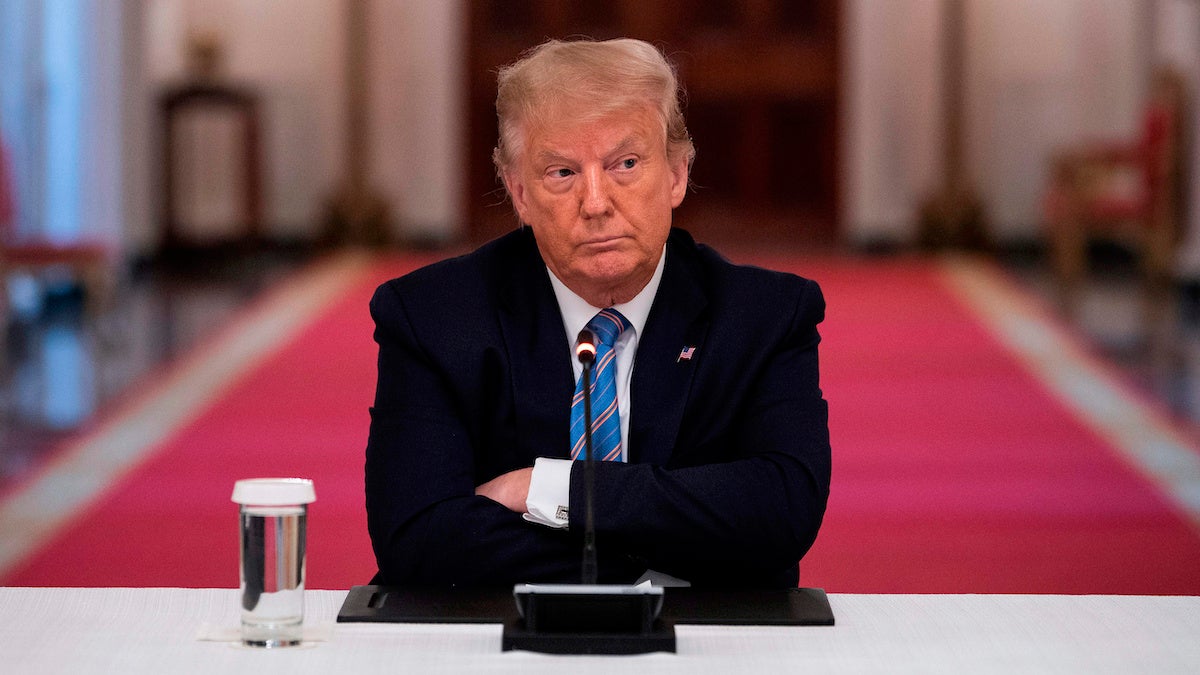 Trump sits during a meeting about safely reopening schools during the coronavirus pandemic on July 7, 2020, in Washington, DC. JIM WATSON / AFP via Getty Images

The Trump administration began the formal process of withdrawing from the World Health Organization (WHO), a White House official said Tuesday, even as coronavirus cases continue to surge in the country.

President Donald Trump first began attacking the WHO’s handling of the new coronavirus in April, when he made the decision to halt funding. But public health experts and Congresspeople from both sides of the aisle say leaving the organization will make Americans, and people around the world, less safe in the midst of a pandemic that has sickened more than 11 million people and killed more than 544,000, according to Wednesday morning figures from Johns Hopkins University.

Lawrence Gostin, who directs the WHO’s Collaborating Center on National & Global Health Law, said the withdrawal was “among the most ruinous presidential decisions in recent history,” according to a statement reported by The New York Times.

“It will make Americans less safe during an unprecedented global health crisis,” Gostin, who cosigned a letter to Congress from 750 health and legal experts opposing withdrawal, said. “And it will significantly weaken U.S. influence on W.H.O. reform and international health diplomacy.”

Thread explains why US w/drawal from @WHO is unlawful & unethical, among most ruinous presidential decisions in history. It will weaken US health & security in midst of a historic #COVID19 pandemic. That's why we sent a letter to Congress urging action: https://t.co/XZERRIUXzM pic.twitter.com/Cj6aaPC0fF

Trump first announced he would pull the U.S. from the organization May 29, arguing that it had responded too slowly to the pandemic and was under the “total control” of China, NPR reported. But the organization issued its first warning about the new virus Jan. 4, just five days after the first announcement from local health authorities in Wuhan, China, The New York Times pointed out. It had completed a detailed report by the next day.

In order to withdraw from the WHO, the U.S. must pay any unpaid dues — which stood at 8 million as of June 30 — and give a year’s notice, NPR explained. The UN confirmed to reporters that it had received that notice and was checking with the WHO if all the conditions for withdrawal had been met.

The yearlong delay means the withdrawal might not go into effect at all if Trump loses to Democratic rival and former Vice President Joe Biden in November’s Presidential election.

“Americans are safer when America is engaged in strengthening global health,” Biden tweeted in response to the news. “On my first day as President, I will rejoin the @WHO and restore our leadership on the world stage.”

Americans are safer when America is engaged in strengthening global health. On my first day as President, I will rejoin the @WHO and restore our leadership on the world stage. https://t.co/8uazVIgPZB

But it isn’t only Democrats speaking out against Trump’s withdrawal.

“I disagree with the president’s decision,” Sen. Lamar Alexander (R-Tenn.), chairman of the Health, Education, Labor and Pensions Committee, said in a statement reported by NBC News. “Certainly there needs to be a good, hard look at mistakes the World Health Organization might have made in connection with coronavirus, but the time to do that is after the crisis has been dealt with, not in the middle of it. Withdrawing U.S. membership could, among other things, interfere with clinical trials that are essential to the development of vaccines, which citizens of the United States as well as others in the world need. And withdrawing could make it harder to work with other countries to stop viruses before they get to the United States.”

Public health experts agreed with Alexander’s assessment of the risk. In their letter to Congress, the 750 health and legal experts wrote that, by leaving the organization, the U.S. would lose access to the WHO’s system for sharing data and vaccines. The U.S. also contributes more funds than anywhere else to the WHO’s Health Emergencies Program, which means withdrawal will cost the whole world funds for contact tracing and vaccine development.

The U.S. historically has contributed around 15 percent of the WHO’s overall budget, or 0 million a year. Beyond COVID-19, that money helps fund programs fighting health concerns like polio, malnutrition, HIV/AIDS, malaria and tuberculosis.

“Pulling funding could reverse hard-won progress and erode the ability of the U.S. to shape and lead policy,” the letter writers said.