Trump vs. the Paris Climate Agreement 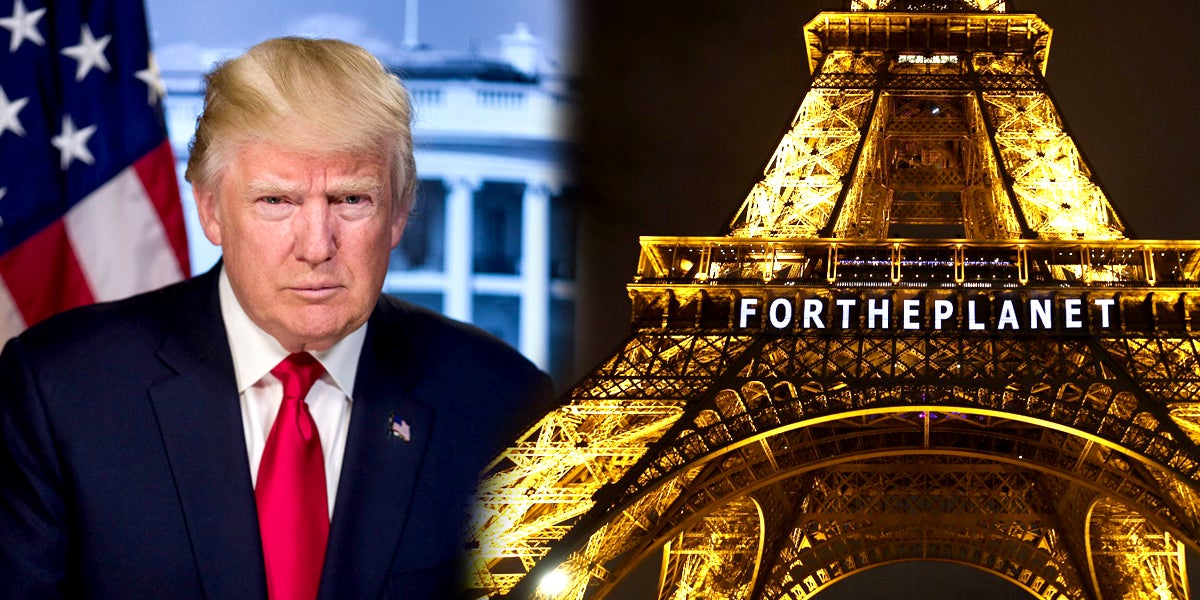 [Editor’s note: The New York Times reports that the Trump Administration is preparing executive orders that would have far sweeping consequences for the United Nations and multilateral treaties. According to their sources, the order will call for “at least a 40 percent decrease” in U.S. funds to the United Nations, while another calls for a review of America’s multilateral treaties, including the recent and historic Paris agreement on climate change. This blog post is in response to this news.]

By Andrew Light and David Waskow

Last year was full of contradictions. Climate action made substantial strides forward, with momentum building on many fronts: The Paris agreement went into effect with record-breaking speed; countries amended the Montreal Protocol to phase-down hydrofluorocarbons (HFCs), the most potent class of greenhouse gases; and the world created a global market-based mechanism to reduce CO2 emissions from civil aviation, to name just a few.

Then the election of Donald Trump as president of the U.S. suddenly raised doubts about whether the country will continue to play a leadership role and cooperate with other nations on climate policies. President Trump’s derisive comments about climate change and the equivocation (at best) that his cabinet appointees have shown for international climate policies could put the U.S. at odds with the world.

But at this critical juncture, America should not become a climate isolationist. The rest of the world appears determined to press ahead in tackling climate change’s threats to humanity’s future. There are many good reasons the U.S. should not pull out of the international climate action movement:

America’s most steadfast allies and trade partners support the Paris agreement. One-hundred and ninety four countries joined the agreement; only three did not (Syria, Nicaragua and Uzbekistan). Many of the 130 heads of government who came to Paris in December 2015 emphasized the wide-ranging impacts of climate change on health, well-being and security and ultimately, each of the countries that joined the agreement did so in their own self-interest.

As countries worked to create the agreement, the landscape of global diplomacy was forever altered, with climate change breaking out of its historical silo to become an issue as central to international diplomacy as trade and security. This has also been reflected in the G7 and G20, where climate change has come to the center of the agenda.

Withdrawing from this wave of cooperation risks much. Countries are now clearly assessing each other’s contributions to the stability of the global climate regime as a strong measure of whether they are good partners more broadly. If the Trump Administration doesn’t honor its international commitments on climate change, they very well may find it difficult to engage countries on the new administration’s priority issues.

We’ve been here before. Former Secretary of State Colin Powell described the reaction when President George W. Bush pulled the U.S. out of the Kyoto Protocol. As he told the New York Times, “when the blowback came, I think it was a sobering experience that everything the American president does has international repercussions.” This assessment was echoed more recently by former U.S. Special Envoy for Climate Change Todd Stern, who went on to say that a withdrawal from the Paris agreement would probably be, “much, much more significant than what happened before.”

Leaving the Paris agreement would indicate the U.S. is abandoning its place in the international climate regime, where other countries will surely step into the vacuum and reap the benefits of global leadership. And just staying in the agreement is not enough—failing to also honor our commitments or help generate international progress could isolate the country from continued global engagement on this core issue.

World leaders from Chancellor Merkel of Germany to President Xi of China have made clear the importance of continued U.S. engagement on climate change. The first test of the Trump Administration may come soon at the G7 meeting in Italy in May or the G20 meeting in Germany in July, when we may see host countries propose an extension of the strong language on climate change delivered at the last meetings of these fora.

The U.S. could stay in the Paris agreement while putting a stop to the policies that make it possible for it to hit its pledge of reducing emissions 26-28 percent below 2005 levels by 2025. This would equate to ceding the race for the global clean energy economy, estimated to be a $6 trillion market by 2030. This would be a huge missed opportunity.

The private sector clearly understands this opportunity. In January, 630 businesses and investors—including DuPont, General Mills, Hewlett Packard and Pacific Gas and Electric signed an open letter to then-President-elect Trump and Congress, calling on them to continue supporting low carbon policies, investment in a low carbon economy and U.S. participation in the Paris agreement.

Indeed, the view that the Paris agreement is at odds with our economic-self-interest fails to acknowledge the transition that is well underway. In South Carolina alone, the clean energy economy grew from an almost $1 billion industry in 2013 to a $3.8 billion industry in 2016. China is already capitalizing on this economic reality by investing $360 billion in renewable energy through 2020, creating 13 million more jobs. Like China, many countries will be more than happy to fill any economic void the U.S. leaves behind.

When asked her views on climate change, Gov. Nikki Haley, nominated by President Trump to be ambassador to the UN, said “we should do what is right, but not at the peril of our businesses.” What is right is staying in the Paris agreement and everything else around it that the U.S. helped build to make it possible.

If the U.S. does not lead or cooperate on such initiatives, it will find itself outside of this critical conversation and strategically isolated in the process. If the U.S. pulls out of the Paris agreement or ceases its pursuit of measures to reduce emissions at home, it will further isolate itself from the world by making this problem worse rather than better.

The only way to minimize the risk climate change poses is to simultaneously prepare for impacts and address causes. The U.S. military cannot do its job of protecting the homeland or American interests abroad if it is hamstrung by a refusal to address the reality of climate change or its impact on international security.

America cannot afford to be a climate loner, nor can the world afford for it to become one. If President Trump is to live up to his promise to be a president for all Americans, then he will honor U.S. climate commitments in the name of security and prosperity.