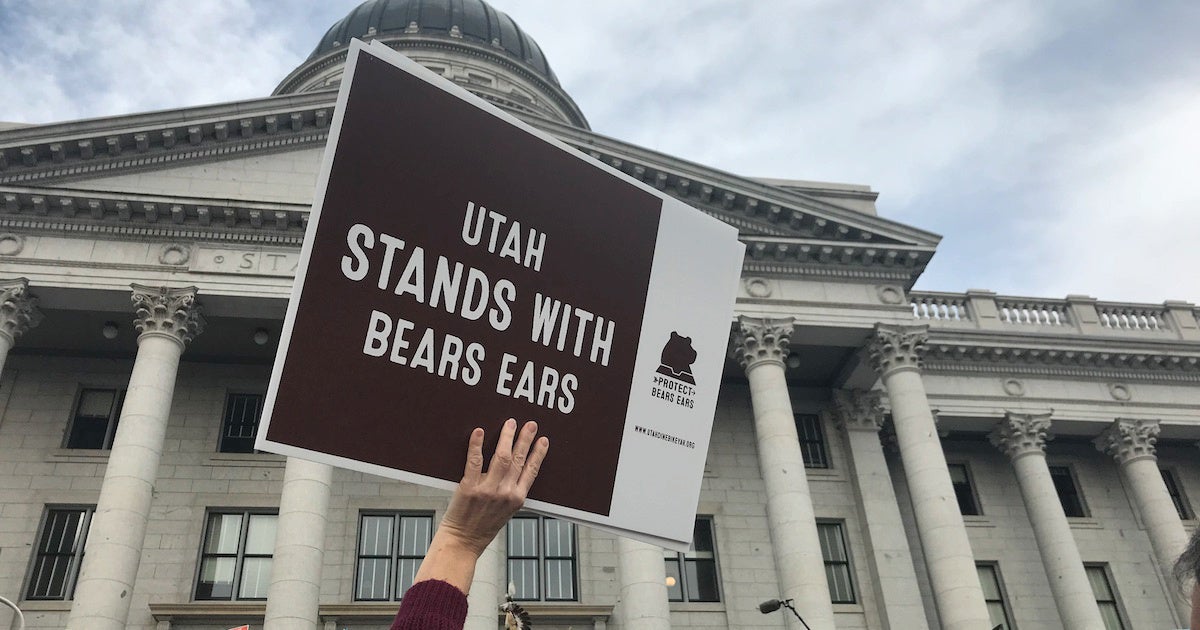 Trump is expected to speak at the Utah State Capitol in Salt Lake City at 12:30 p.m. According to reports, he will announce the gutting of the 1.3 million acre
Bears Ears National Monument by 85 percent and the slashing of the 1.9 million acre Grand Staircase-Escalante National Monument by 50 percent. The move will be the largest elimination of protected areas in U.S. history.

National monuments can be designated by presidents under the Antiquities Act, which puts the lands off limits to drilling, mining, logging and ranching. Trump says former presidents abused the act.

Bears Ears was designated in 2016 by President Barack Obama. Grand Staircase-Escalante was created by President Bill Clinton in 1996.

Trump’s plan to shrink the two monuments came after a review by Interior Sec. Ryan Zinke that the president ordered in April. Fossil fuel-linked advocates have long targeted the areas for oil, gas and coal resources within and around the monuments’ boundaries. According to Zinke’s leaked memo, Grand Staircase-Escalante sits atop “several billion tons” of coal. Coal and oil reserves also surround Bears Ears.

Trump’s decision was made despite widespread public support of the designations.
More than 2.8 million people submitted comments to the Interior Department urging the administration to preserve protections for the lands.

Over the weekend, more than 5,000 people rallied at the Utah State Capitol to protest Trump’s decision.

“Flatly, Trump does not have the legal authority to gut our national monuments nor does he have the support of the people of Utah to do so. Thousands of Utahns raised their voices today, in recognition of the cultural, archaeological, and environmental significance of these areas,” Sierra Club Utah Chapter Director Ashley Soltysiak said of Saturday’s demonstration. “Today’s rally showed the strength of support for Tribal sovereignty and Utah’s public lands.”

A protest is also planned at the State Capitol during the president’s visit today.

Text UTAH to 52886 for details on Monday’s protest when Trump arrives in SLC. #SaveGrandStaircase #StandWithBearsEars

Monument supporters warn that reducing the land’s borders and opening them up to drilling, mining and other development would destroy Native American cultural and archaeological sites and lead to loss of wildlife.

As Bruce Babbitt, the Secretary of Interior from 1993 to 2001 and the Democratic governor of Arizona from 1978 to 1987, eloquently wrote in a
New York Times op-ed published Friday:

Mr. Trump’s plans add up to the largest elimination of protected areas in American history. He is a vandal in our midst, coming in person to lay waste to the land. This theft of our heritage should awaken us to the damage being piled up across our public lands under this administration.

If he succeeds, tens of thousands of Native American sacred sites in southern Utah will be at renewed risk of looting. Red rock canyon lands will face the prospect of being stripped for coal and drilled for oil and gas. And the wild places where we hike and hunt and find solitude may not be there for future generations to do the same.

“We will be fighting back immediately. All five tribes will be standing together united to defend Bears Ears,” Natalie Landreth, an attorney for the
Native American Rights Fund, told
Reuters.

Reuters reported that Republican Congressman Rob Bishop of Utah, chair of the House Natural Resources Committee, is expected to introduce legislation after Trump’s announcement to carry out the cuts. However, the measure’s chance of passing the Republican-controlled body is unclear.

“[President Trump’s] ignorance and disrespect diminish the office of president of the United States,” Udall said. “He will be challenged in court, and I will fight him every step of the way in my capacity as democratic leader on Senate Indian Affairs and the Interior Department Appropriations Subcommittee.”

“Since taking office, the Trump administration has abandoned its responsibility to protect America’s public lands for our children and our grandchildren, and they’ve rejected the voices of millions of Americans,” said Patagonia president and CEO Rose Marcario. “Removing protections for federal lands could result in permanent destruction of these treasured places and could jeopardize access for all of us. As a result, Patagonia will continue our fight to protect Bears Ears National Monument in the courts.”