Trump’s Foolish Climate Babble Begs the Question: How Can ‘Global Waming’ Tweet Not Be a Troll? 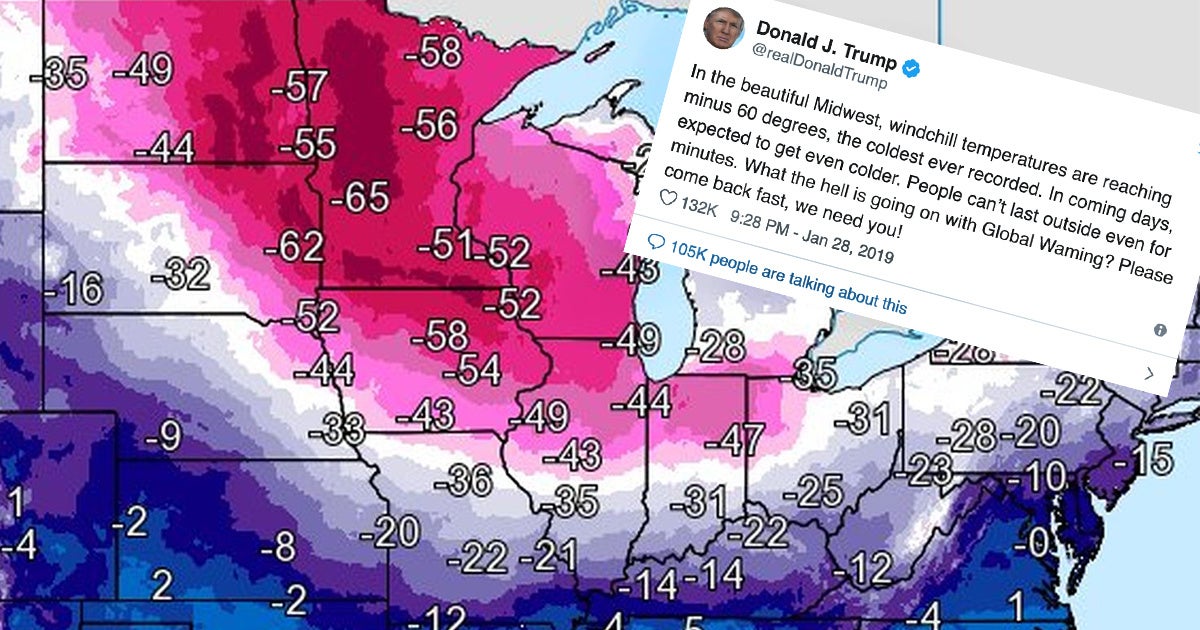 The Midwestern U.S. is currently enduring life-threatening cold temperatures—which these days all but ensures, as so many climate reporters and experts anticipated, an ignorant and even infuriating tweet from President Donald Trump conflating weather and climate.

Late Monday, Trump tweeted about the brutal and dangerous wind chills hitting the middle of the country, and even asked global “waming” (sic) to “please come back fast.”

The Toronto Star’s Washington correspondent, Daniel Dale, publicly grappled with whether Trump’s latest foolish remarks deserved any attention. As he noted, “Trump’s climate-trolling is such obvious outrage bait that you almost want to ignore it, but it’s also self-provided evidence of one of the most significant ignorance crises of his presidency, so I dunno.”

“There he goes again,” tweeted New York Times climate reporter Henry Fountain. “He’s consistent, give him that,” noted John Schwartz, also of the Times, linking to an article from December of 2017 titled, It’s Cold Outside. Cue the Trump Global Warming Tweet.

The president’s position has shifted slightly on the global climate crisis, from claiming it is a myth made up by China, to telling CBS’s 60 Minutes in an October interview: “Something’s changing and it’ll change back again. I don’t think it’s a hoax … But I don’t know that it’s manmade. I will say this. I don’t wanna give trillions and trillions of dollars.”

His administration, meanwhile, has ignored growing demands from scientists and the American public for urgent action to scale back the U.S.’ rising greenhouse gas emissions—instead working at the behest of polluting industries to destroy dozens of environmental regulations designed to curb the crisis.

Some who responded to Trump’s Monday night tweet simply laid out the facts. Chris Gloninger, a meteorologist from NBC10 Boston, pointed out in a pair of tweets that climate and weather are not synonymous, and “climate change means EXTREME weather, which includes record cold weather as well.”

The fact we are seeing record cold does not contradict climate research.

“No, these aren’t the coldest temperatures ever recorded in the Midwest. And in fact, ‘Global Waming’ is making these extreme cold outbreaks more rare, exactly as we expected,” said Grist staff writer Eric Holthaus. “I’m a meteorologist, and we have proof of this.”

CNN’s Ryan Struyk turned to a line from a report put out by the federal government under Trump’s administration:

Key climate change report from Trump’s own administration: “Increases in temperatures during the growing season in the Midwest are projected to be the largest contributing factor to declines in the productivity of U.S. agriculture.” https://t.co/O01gDLFMcD

The Climate Reality Project, launched by former Vice President Al Gore, tweeted: “Yes, it’s cold. Yes, our climate is still changing,” and linked to a blog post explaining how that could be and what a polar vortex is.

The bottom line, as the post details, is that “even though our planet is warming, and record warm days far outnumber record cold ones, we still see periods of colder weather from time to time. We expect that we will far into the future. It doesn’t mean that climate change isn’t happening. And it certainly doesn’t mean that we can stop working to cut emissions and solve the climate crisis.”