Trump Says U.S. Will Join 1 Trillion Trees Initiative, While Ignoring the Root of the Problem and Attacking Climate Activists 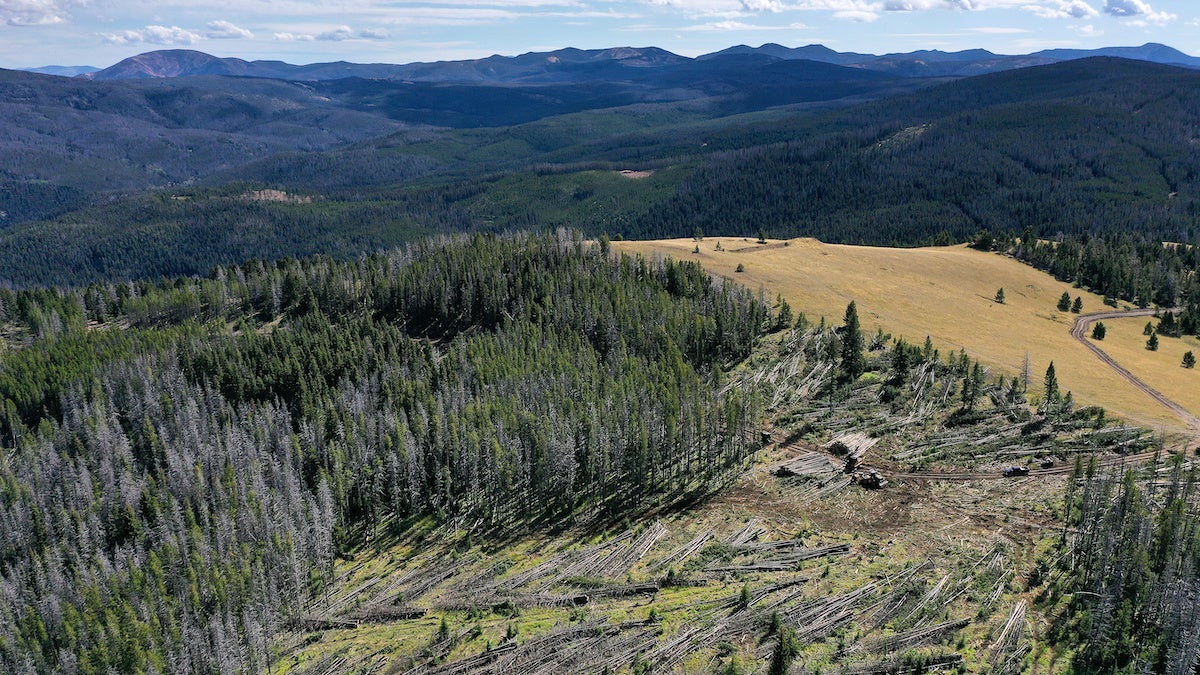 Loggers operate in an area of lodgepole pine trees killed by the mountain pine beetle in the Beaverhead-Deerlodge National Forest on Sept. 13, 2019 in Montana. As climate change makes summers hotter and drier in the Northern Rockies, forests are threatened with increasing wildfire activity, deadly pathogens and insect infestations, including the mountain pine beetle outbreak. The insects have killed more than six million acres of forest across Montana since 2000. Chip Somodevilla / Getty Images

President Donald Trump told a crowd at the Davos World Economic Forum Tuesday that the U.S. will join the Forum’s 1t.org initiative to restore and conserve one trillion trees around the world, according to The Hill.

For the most part, his speech touted his administration and the strength of the U.S. economy. He described the U.S. as a land of opportunity and unfettered economic growth and said he’s “a very big believer in the environment,” as The Hill reported. That stood in stark contrast to other world leaders who spoke of needing to address the climate crisis and global collaboration.

Trump’s announcement that the U.S. would join the 1t.org initiative was the part of his speech that received the warmest applause.

“We’re committed to conserving the majesty of God’s creation and the natural beauty of our world,” Trump said, adding that the U.S. “will continue to show strong leadership in restoring, growing and better managing our trees and our forests,” as The Hill reported.

However, he then quickly decided to slam environmentalists as alarmists, saying “We must reject the perennial prophets of doom, they are the heirs of yesterday’s foolish fortune tellers,” he claimed, adding that those people “want to see us do badly,” according to Quartz.

He then said, “We will never let radical socialists destroy our economy, wreck our country, or eradicate our liberty. America will always be the proud, strong and unyielding bastion of freedom,” as Newsweek reported.

Trump’s sudden turn to dismiss people worried about the climate crisis showed just how unclear his plans to join the 1t.org initiative actually are. As The Guardian‘s Fiona Harvey wrote, “Will he restore the protected lands that he opened up for commercial development, the biggest reduction in public lands in U.S. history? Reverse his push for logging in the Alaskan Tongass National Forest? Bring back the jobs cut from the U.S. Forest Service? Will he lean on his ally Jair Bolsonaro in Brazil to stop the burning of the Amazon? Or will he just sign up to a snappy feel-good headline? Because who, after all, doesn’t like trees?”

Environmentalists were also quick to point out how much the promise to plant trees missed the mark.

Jennifer Morgan, Greenpeace’s executive director, told The Guardian that the 1tn trees initiative didn’t make up for the lack of a wider attack on the climate emergency, and Trump failed to appreciate the scale of the crisis. “To assume you can have a great, profitable America, and happy Americans without understanding the risk to Americans from climate change is astounding,” she said. “It just demonstrates the level of denial, and the capture of this government by the coal, oil and gas industries.”

In another highly anticipated speech on Tuesday, climate activist Greta Thunberg put the 1t.org in her crosshairs, calling it too little and a distraction from the actions necessary to mitigate the climate crisis.

“We’re not telling you to offset your emissions by just paying someone else to plant trees in places like Africa, while at the same time forests like the Amazon are being slaughtered at an infinitely higher rate,” Thunberg said, as Newsweek reported.

“Planting trees is good, of course, but it’s nowhere near enough of what is needed. And it cannot replace real mitigation, and rewilding nature.”