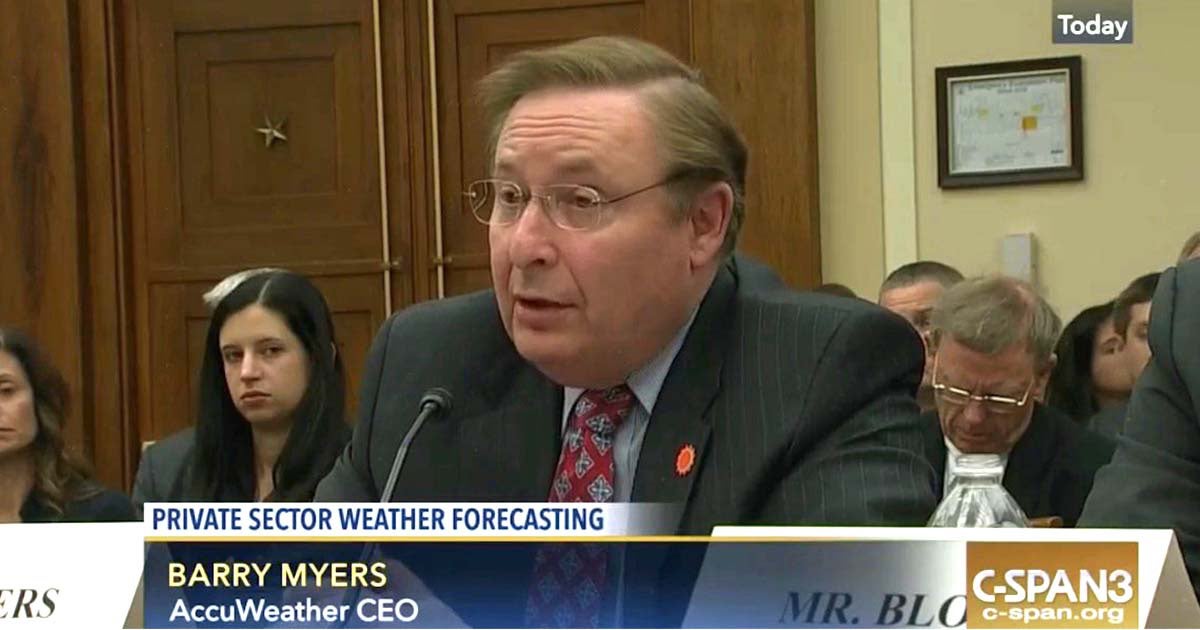 The White House praised Myers and his company for its “highest grossing years, and its largest global web and mobile audience growth. He is one of the world’s leading authorities on the use of weather information.”

But critics worry about the wealthy businessman’s potential conflicts of interest, especially his support of a highly criticized bill that would have shifted taxpayer-funded National Weather Service data to for-profit companies. Companies such as AccuWeather and The Weather Channel.

Former NOAA scientist and manager Andrew A. Rosenberg, who is currently the director of the
Center for Science and Democracy at the Union of Concerned Scientists, wrote:

Basically, [AccuWeather’s] business model is to take NOAA data and products on weather, developed with taxpayer dollars, and deliver them to the public in a proprietary form that customers want. [Myers] has been a strong
advocate against NOAA having the capability to provide such products directly to the public, hence the rather boring form of NOAA forecasts which is interpreted and commoditized by companies like AccuWeather and many others.

AccuWeather has been active in efforts to undercut the role of NOAA. In 2005, AccuWeather, under the leadership of Myers’ brother Dr. Joel Myers, worked with Senator Rick Santorum on
a bill to severely restrict the National Weather Service’s ability to provide weather forecasts to the public. The company donated to Santorum’s then Senate campaign and has been vocal about their interest in downsizing NOAA in the interest of privatizing weather forecasting.

Sen. Bill Nelson (D-FL), who now serves as the ranking member of the Senate Commerce Committee, successfully blocked the bill from consideration.

“We’ve had ten hurricanes in ten weeks, I want to make absolutely sure any NOAA administrator will put the public first in delivering freely available weather forecasts,” Nelson said in a statement provided to EcoWatch. “We can’t afford to have someone in this position that might be tempted to feather their own nest by privatizing the National Weather Service.”

While it’s true that Myers knows the weather, NOAA has other crucial roles besides issuing daily forecasts. The agency produces important climate change research and manages the nation’s fisheries.

Opponents say that Myers, who has degrees in business and law, is unlike previous NOAA administrators who have prominent scientific backgrounds. For instance, President Obama’s NOAA administrator Kathryn Sullivan is a geologist and former NASA astronaut.

“If confirmed, it will be Myers’ duty to champion all facets of NOAA from the deep sea to outer space,”
Ocean Conservancy CEO Janis Searles Jones said in a statement. “Myers has had nearly forty years in the private weather industry but the stakes at NOAA are different.”

“He doesn’t know much about climate or oceans,” Cliff Mass, a meteorologist at the University of Washington, told Wired. “That is going to be a problem. He doesn’t have scientific credibility.”

Trump’s 2018 budget proposal cuts NOAA’s budget by 17 percent to $4.8 billion, including cutting $230 million for grant and education programs. According to Wired, “Mass and others argue that cutting basic research into the oceans, atmosphere, and climate—the taxpayer-funded research done by NOAA and NWS—will lead to less reliable weather modeling by private firms like AccuWeather as well as federal models like the Global Forecast System.”

However, those who support Myers say that his business background is a plus.

“Myers will bring that Big Data acumen to NOAA and likely accelerate a process that has slowly been underway: more private-sector collaboration with satellite data, weather models and other information services,” Ryan Maue, a weather model product developer for Weather.us, told the
Associated Press.

Ray Ban, co-chair of Weather Coalition, also told the Washington Post, “In an Administration that places high value on business acumen, Barry brings a strong track record in growing one of the most successful companies in the weather industry.”

If confirmed, Myers at least has a well-respected No. 2 for support. The Senate has already confirmed former Navy oceanographer Rear. Adm. Timothy Gallaudet as assistant secretary of commerce for oceans and atmosphere. Gallaudet has master’s and doctoral degrees in oceanography from the Scripps Institution of Oceanography in San Diego, California.

The
Consortium for Ocean Leadership and University Corporation for Atmospheric Research have applauded the pick. And as Rosenberg wrote, “To be fair, I believe that Admiral Gallaudet, former oceanographer of the Navy is an excellent choice for NOAA, as do others I respect.”

Finally, David Titley, a meteorologist at Pennsylvania State University, in State College and a former chief operating officer for NOAA, wondered about Myers’ role in an administration
hostile towards climate action.

How is he “going to reconcile the overwhelming and ever-strengthening evidence of climate change and its direct relationship to man-made emissions, and statements from the White House and cabinet secretaries that ignore that link?” Titley noted to
Science.

Myers’ position on climate change is unclear. “We have said to our scientists, if you have special skills in climate, if you want to voice your professional opinion, our platforms are open to you,” Myers told the Wall Street Journal in 2014. “We do not want people getting involved in the political aspect of this debate.”