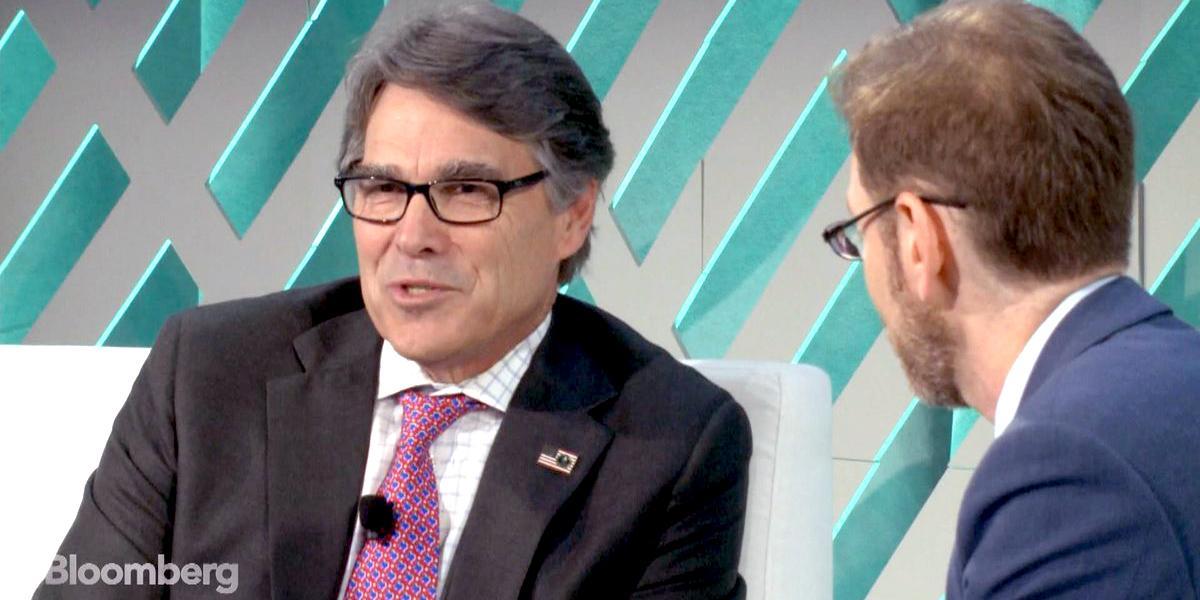 Rick Perry said Tuesday that the Trump administration is having “very classified” conversations about preempting state and local support for renewable energy under the pretense of national security.

During an on-stage interview, Perry was asked if the administration would interfere with state policies requiring utilities to get power from renewable sources. Such a move would potentially destroy efforts by California, New York and other states to fight climate change by encouraging the growth of clean power.

Perry didn’t rule it out, saying the reliability of the grid was a matter of national security.

“That’s a conversation that will occur over the next few years,” Perry said. “There may be issues that are so important that the federal government can intervene.”

And according to Time’s Justin Worland:

During a question and answer period, Perry also suggested that increased reliance on renewable energy sources like wind and solar might make the grid unreliable given they only work when the sun is shining and the wind is blowing, creating national security concerns. The Trump administration might try to preempt state and local governments that use policy to encourage clean energy to address those concerns, Perry said.

“There’s a discussion, some of it very classified that will be occurring as we go further,” Perry said. “The conversation needs to happen so the local governors and legislators, mayors and city council understand what’s at stake here in making sure that our energy security is substantial.”

“There’s a conversation, there’s a discussion, some of it obviously very classified, that will be occurring as we go forward, to make sure that we have the decisions made by Congress, in a lot of these cases, to protect the security interests of America,” he said at BNEF’s The Future of Energy Summit, “and that states and local entities do in fact get preempted with some of those decisions.”

Rick Perry is also facing scrutiny for ordering a study examining “electricity markets and reliability” that was tasked to his Chief of Staff Brian McCormack, who previously played a central role in attacks against rooftop solar for the Edison Electric Institute. Also named to lead work on the study is political appointee Travis Fisher. Fisher previously worked for the Institute for Energy Research (IER) and American Energy Alliance (AEA), which have received ample funding from the Koch brothers and coal industry. IER and AEA have long sought to undermine renewable energy standards in states like North Carolina, a national leader in solar energy.

Christian Roselund of PV Magazine responded to Perry’s study order by pointing out that the National Renewable Energy Laboratory (NREL)—one of the Dept. of Energy’s 17 National Laboratories—has already written studies that show we can rely on renewable energy to provide much more of our electricity than it does today. In fact, one 2012 NREL study found that we could get 80 percent of our electricity from renewable sources by 2050 using existing technologies. Other studies by states and grid operators confirm that renewable energy is reliable.

Another NREL study documented the significant health and environmental benefits generated by the state renewable energy standards that the Trump administration could try to preempt. In short, these policies make Americans safer by reducing harmful pollution emitted when we burn fossil fuels—especially coal—to produce electricity.

Other reports by clean energy experts have documented the economic security benefits of these state renewable energy standards, which have supported the growth of jobs in the booming solar and wind power industries.

Real world experience also shows that renewable energy is working just fine. Texas, the state where Rick Perry was governor, actually leads the nation in wind energy generation. In fact, nearly a quarter of the electricity generated in Texas during the first quarter of 2017 came from wind.

Ask the Department of Defense, Too

The Dept. of Defense does not appear to share the Trump administration’s concerns about renewable energy. In fact, the military has made significant investments in renewable energy in order to enhance national security—an investment that continues with Trump in the White House. The U.S. Navy just recently refuted misleading claims that a new wind farm could interfere with a radar system made by some Republican lawmakers in North Carolina who wrote a letter to the Trump administration.

Climate Change Is a Real Threat to Energy and National Security

In 2015, the Dept. of Energy released a report that documented the threat climate change poses to energy security—and by extension national security—in every region of the U.S.

The Dept. of Defense has also documented the national security risks posed by climate change— risks James Mattis acknowledged during his confirmation as Trump’s Secretary of Defense.

Trump’s efforts to rollback limits on carbon dioxide pollution from power plants and his embrace of the so-called “clean coal” put the nation’s energy and national security at further risk from climate change. Preempting state and local support for renewables would only increase those risks.

Greentech Media reported that Perry made only “sparse” mention of renewable energy at the Bloomberg New Energy Finance Summit, but did say he wants to “help renewable energy make its way to the grid … “

Travis Fisher is not the only political pick by the Trump administration that comes with a history of attacking state and local policies that have fueled the growth of renewable energy to benefit funders in the fossil fuel or utility industry.

Trump tapped Thomas Pyle, also of the Institute for Energy Research (IER) and American Energy Alliance (AEA), to run his Dept. of Energy transition team. IER and AEA have targeted state renewable energy standard policies with misleading attacks for years. During the 2016 election, Trump responded to an AEA questionnaire with pledges to “review” key U.S. clean energy and climate change policies, including the U.S. Environmental Protection Agency’s Clean Power Plan and science-based endangerment finding for greenhouse gas emissions. Trump has already fulfilled part of that pledge by beginning the process of rolling back the Clean Power Plan.

Trump similarly chose climate denier Myron Ebell of the Competitive Enterprise Institute to lead his Environmental Protection Agency transition team. Like Fisher and Pyle, Ebell has attacked renewable energy standards in states like Ohio. Greentech Media recently took a rather revealing look at the backgrounds of some other members of Trump’s energy beachhead team.

No Uncertainty About State and Local Support for Renewable Energy

At this point, it remains unclear how exactly the Trump administration would use the pretense of reliability concerns to preempt state and local support for renewable energy. If it does seek to preempt state and local control, it will certainly face significant opposition from states and local communities—including those led by Republicans—that are already leading the way on renewable energy.