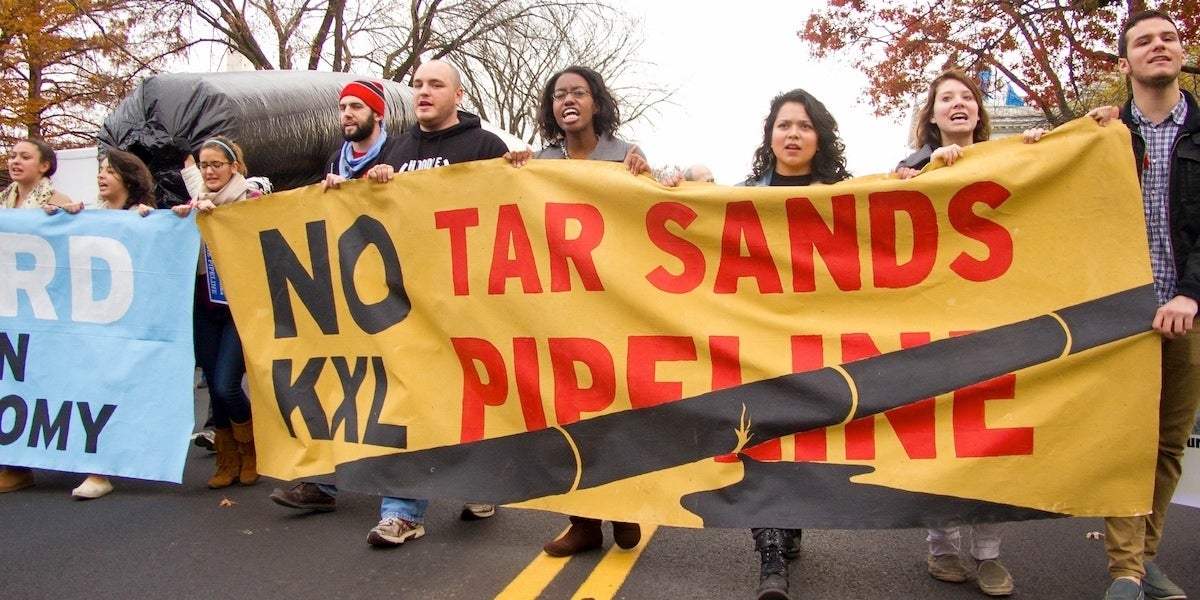 Environmentalists spoke out against President Donald Trump‘s State Department after it found “no significant environmental impacts” in its review of TransCanada’s long-gestating Keystone XL (KXL) pipeline.

The alternative route approved by Nebraska regulators in November would have “minor to moderate” impacts from its construction and operation, according to the 300-page draft report released Monday. It said the route would not have a major impact on the state’s water resources, soils or wildlife. It may cause minor impacts on cultural resources such as Native American graves.

Once built, the $8 billion 1,180-mile pipeline will transport heavy crude from Alberta’s tar sands to U.S. Gulf Coast refineries. The controversial project has been at the center of an environmental fight for a decade. President Obama rejected the KXL in 2015 partly due to concerns about its contribution to climate change, but President Trump reversed the decision just days into office.

In a press release, the Sierra Club said that Trump’s approval of the KXL was based on an outdated Environmental Impact Statement from 2014 and accused the administration of short-cutting the permitting process.

“Once again, the Trump administration is attempting to take a shortcut around the legally required review process on Keystone XL, putting our communities at risk for the sake of propping up the Canadian tar sands industry,” said Sierra Club Beyond Dirty Fuels Campaign Director Kelly Martin in a statement. “Keystone XL was a bad idea when it was proposed a decade ago, it was a bad idea when former President Obama rejected it, and it’s an even worse idea now. This pipeline is a threat to our land, water, wildlife, communities, and climate, and we will continue fighting, in the courts and in the streets, to ensure that it is never built.”

The group noted that in November, Nebraska regulators rejected TransCanada’s preferred route for the pipeline. Instead, they voted for a new route that had not been assessed.

KXL opponents are now trying to block the State Department’s approval of the pipeline “based on this insufficient analysis” in federal court, the Sierra Club said.

The press release added: “Rather than following the legally required process of preparing a Supplemental Environmental Impact Statement before approving a project, the State Department is attempting to rush the project through by releasing an abbreviated Environmental Assessment on the new Nebraska route while leaving its permit in place, and still failing to conduct an adequate review of the project’s climate impacts, harm to endangered species, or changes in oil prices and market forces since 2014.”

Under a 2011 state law, Nebraska is not allowed to factor in pipeline safety or spill risks. Nebraska regulators did not factor in a 210,000-gallon spill from Transcanada’s existing Keystone Pipeline on South Dakota farmland that happened just days before they voted on the KXL’s alternative route.

TransCanada hopes to start KXL construction in the beginning of 2019.

“We will review the environmental assessment and provide comment to the Department of State as necessary,” Matthew John, a TransCanada spokesman, told Bloomberg.

The State Department has opened its draft report of the Keystone XL Mainline Alternative Route for a 30-day public comment period.

“The Trump administration can’t patch over its total failure to comply with the law by releasing this environmental assessment now, after Keystone XL has already been approved,” said Jackie Prange, senior attorney with the Natural Resources Defense Council in a statement. “The dirty tar sands carried by this pipeline would have disastrous effects on our climate, land, and water. This project should have been rejected at the outset, and the administration should revoke the permit immediately.”

“The Trump administration doesn’t care about water or property rights,” Kleeb stated. “Landowners, Tribal Nations and everyday citizens will continue to fight the Trump administration’s illegal rubber-stamp of a permit for Keystone XL, and this illegal review that completely violated due process of affected landowners on the Mainline Alternative Route. The only right thing to do, would be to reject Keystone XL again.”