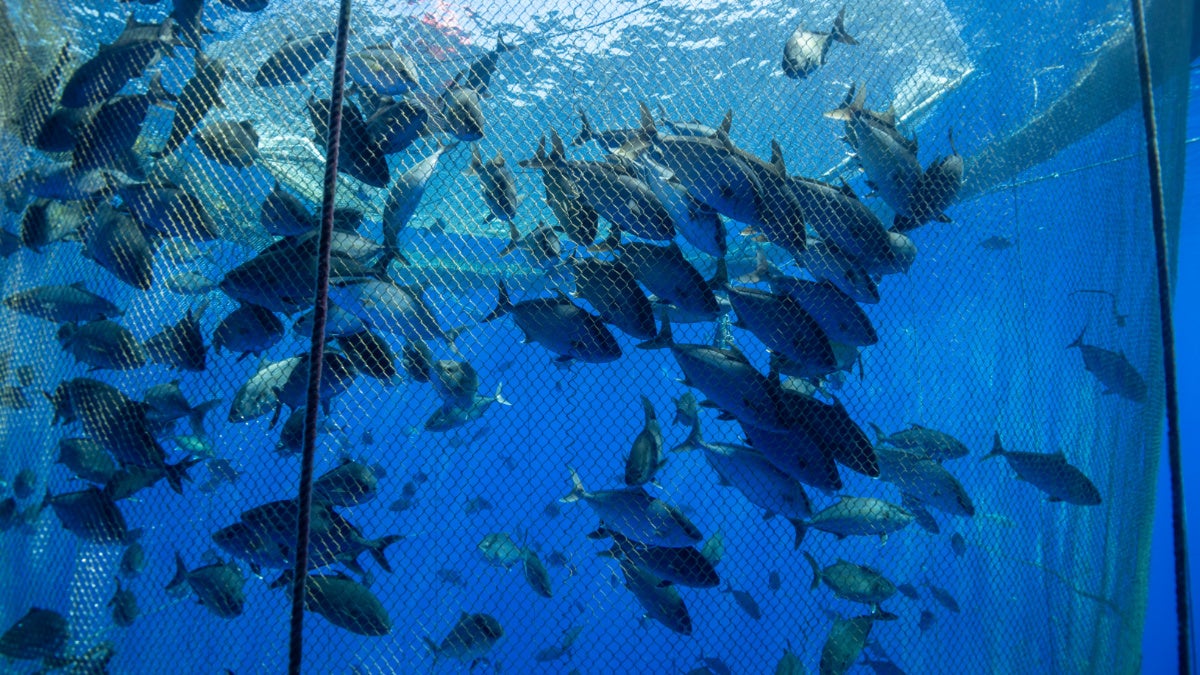 A large school of fish swim in a fish farm. wildestanimal / Getty Images

President Donald Trump issued an executive order late Thursday that environmentalists warned will accelerate the corporate exploitation of oceans by relaxing regulations on and streamlining the construction of industrial offshore aquaculture facilities, which critics deride as “floating factory farms” that pump pollution and diseases into public waters.

The Don’t Cage Our Ocean Coalition, which was formed to oppose ocean industrial fish farming, said in a statement that Trump’s Executive Order on Promoting American Seafood Competitiveness and Economic Growth “mandates federal agencies to craft a program for rapid authorization of industrial offshore aquaculture facilities, which use giant floating cages to cultivate finfish, allowing toxic pollution to flow into open waters.”

Rosanna Marie Neil, policy counsel for Northwest Atlantic Marine Alliance, a member of the coalition, said the Trump White House is “supporting the corporate takeover of our oceans while they hope we aren’t paying attention.”

“The federal government should strengthen local food security during this health crisis by supporting sustainable seafood,” said Cufone, “rather than allowing corporations to pollute the ecosystems we depend on.”

BREAKING: In the middle of a public health pandemic, Trump just issued an executive order to bolster aquaculture — an industry that has pumped antibiotics, chemicals, disease and fish waste into our oceans.#DontCageOurOceanhttps://t.co/qyPUUITtL2

Trump is exploiting a public health crisis to help an industry known for pumping diseases & antibiotics into oceans.#DontCageOurOcean https://t.co/RAGOoEAR2T

Trump’s executive order Thursday was just the latest step the president has taken amid the coronavirus pandemic to loosen regulations on polluting industries. In late March, as Common Dreams reported, the Environmental Protection Agency announced a sweeping suspension of pollution regulations and empowered the fossil fuel industry to police itself indefinitely.

Environmental groups sued the EPA over the move, which they condemned as a “free pass for polluters.”

In an op-ed for the Wall Street Journal Thursday, White House advisers Joe Grogan and Peter Navarro touted Trump’s aquaculture executive order as a step toward making the U.S. “the world’s seafood superpower.”

“It is outrageous and unethical for the federal government to use the current public health crisis to bolster this polluting industry,” Hallie Templeton, senior oceans campaigner at Friends of the Earth, said in a statement. “Now is the time to prioritize our health, security, sustainable food systems, and American farmers and fishermen, not corporations.”