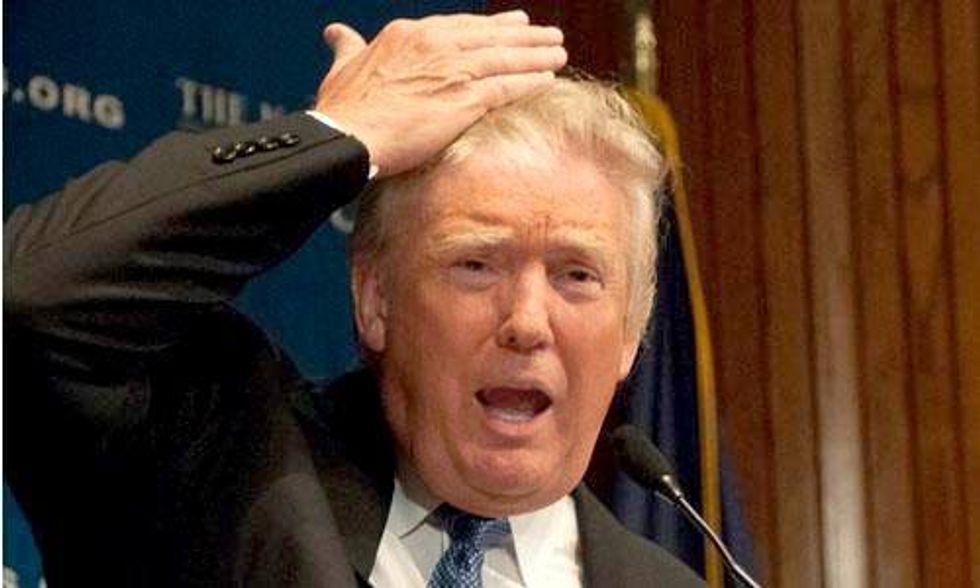 At an event in Aiken, South Carolina Saturday, Donald Trump spoke about how he has been personally impacted by the U.S. Environmental Protection Agency's (EPA) regulations. “I’ll give you one regulation,” Trump told TIME in response to a question about the EPA's regulation on U.S. waterways.

“So I build, and I build a lot of stuff. And I go into areas where they have tremendous water … And you have sinks where the water doesn’t come out ... You have showers where I can’t wash my hair properly, it’s a disaster!” he said, to laughter from the crowd.

“It’s true,” Trump continued. “They [the showerheads] have restrictors put in. The problem is you stay under the shower for five times as long.”

Trump is referring to low-flow showerheads, which along with low-flow faucets and toilets, save significant amounts of water while still providing adequate flow, according to the EPA, which developed the WaterSense label for shower heads, faucets and toilets.

Water-saving showerheads that earn the WaterSense label must demonstrate that they use no more than two [gallons per minute. Standard showerheads use 2.5]. The WaterSense label also ensures that these products provide a satisfactory shower that is equal to or better than conventional showerheads on the market. EPA worked with a variety of stakeholders—including consumers who tested various showerheads—to develop criteria for water coverage and spray intensity. All products bearing the WaterSense label—including water-efficient showerheads—must be independently certified to ensure they meet EPA water efficiency and performance criteria.

The EPA enumerated the economic and environmental savings of low flow devices:

On a national scale, if every home in the United States installed WaterSense labeled showerheads, we could save more than $2.2 billion in water utility bills and more than 260 billion gallons of water annually. In addition, we could avoid about $2.6 billion in energy costs for heating water.

Trump's entire presidential campaign has been peppered with outrageous claims on environmental issues. On multiple occasions, he's called global warming "a hoax," going so far as to claim it's a concept “created by and for the Chinese in order to make U.S. manufacturing non-competitive.” Among other comments, Trump has said the Keystone XL pipeline would have “no impact on the environment,” and has cited unusually cold days in fall as evidence that climate change doesn't exist.

He's repeatedly bashed President Obama for his call to action on climate change, particularly during the COP21 Paris talks. President Obama called the UN talks "an act of defiance" in the wake of the terrorist attacks in Paris. In response, Trump said Obama's speech was “one of the dumbest things I’ve ever seen, or perhaps most naive.”

“I think one of the dumbest statements I’ve ever heard in politics, in the history of politics as I know it, which is pretty good, was Obama’s statement that our number one problem is global warming,” said Trump.

He told The Hill, if he were president, he would have skipped the talks altogether. The talks have been generally hailed in the environmental community. Former CEO and Chairman of the Sierra Club Carl Pope called the Paris Agreement, which was finalized this weekend, the "greatest single victory since the emergence of the modern environmental movement."

Check out this hilarious segment on his hair from when The Donald hosted Saturday Night Live: