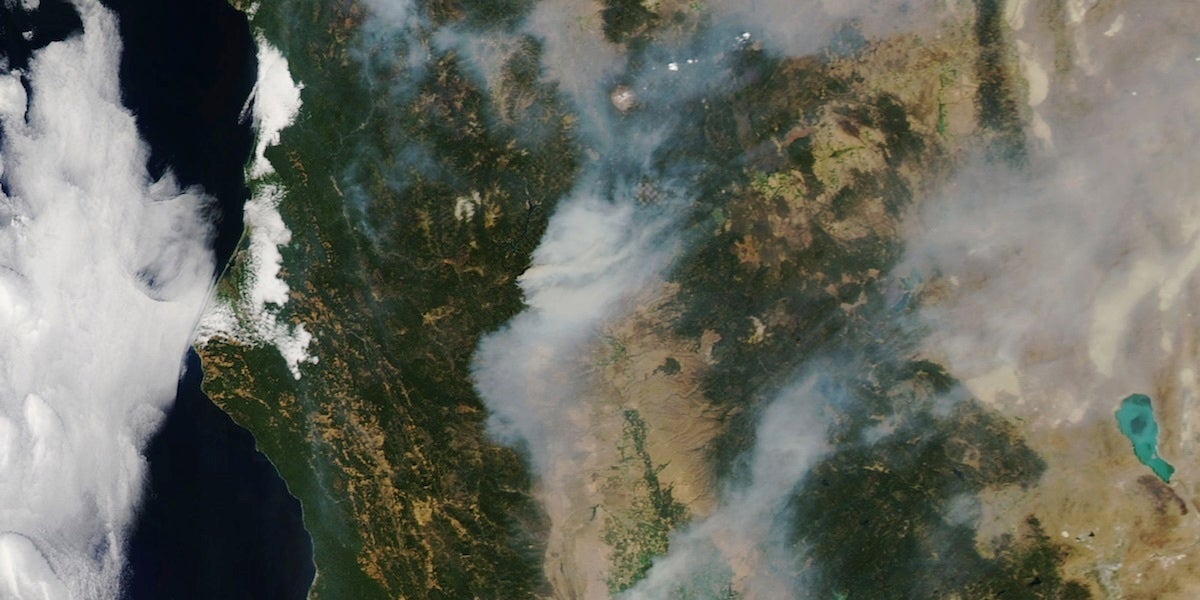 President
Donald Trump tweeted for the first time about the deadly wildfires ravaging California that have killed nine people, destroyed hundreds of buildings and charred hundreds of thousands of acres.

Trump did not offer condolences. Rather, the president tweeted Sunday that the wildfires are “being magnified & made so much worse by the bad environmental laws which aren’t allowing massive amount of readily available
water to be properly utilized.” He added that the water is being diverted into the Pacific Ocean.

It’s not clear why he is blaming California lawmakers for releasing water into the sea.

“There is more than enough readily available water in CA to fight the fires,” he tweeted. “The truth is that wildfires across the United States started increasing in the 1980s. Some of this increase is attributable to
climate change.”

It's Sunday. That means @realDonaldTrump is lying, again. There is more than enough readily available water in CA to fight the fires.

The truth is that wildfires across the United States started increasing in the 1980s. Some of this increase is attributable to climate change. https://t.co/K0V6bKT9Go

Also, firefighters have not complained about lacking water to fight the 17 major wildfires across the state.

When asked if there’s a water shortage at the Carr and Mendocino Complex fires—the most serious of the many infernos—California Department of Forestry and Fire Protection spokeswoman Lynette Round told the
San Francisco Chronicle, “Not that I’m aware of … but that doesn’t mean it’s not happening.”

Rather, firefighters told Buzzfeed that the severity of the fires can be attributed to the region’s extreme weather conditions and gale-force winds that have whipped the flames.

Experts have also linked California’s wildfires to population growth and development, years of prolonged drought that have dried vegetation and climate change.

Lost in recent conversation over #wildfire risk is the following point by @thirstygecko: Warming #climate & drying forests/vegetation across American West is clearly not the only relevant factor behind emerging era of megafires. But it is large & growing contributor.#CAfire #CAwx https://t.co/VzMZZd8Wlg

To be fair, the president also called for clearing trees to stop the fires, which does starve a fire by removing the fuel.

“It’s a daunting task that we’re working with some of our cooperators on to make sure we can get some of those trees out of the way to not add to some of the fuel,” Cal Fire Assistant Chief Mike Marcucci said to KPIX.

Brown recently warned that climate change has made his state’s string of wildfire outbreaks “part of our ordinary experience.”

“[The] predictions that I see, the more serious predictions of warming and fires to occur later in the century, 2040 or 2050, they’re now occurring in real time,” Brown said at a news conference on Wednesday in Sacramento.

“You can expect that—unfortunately—to continue intensifying in California and throughout the Southwest. We are part of that process,” he added.