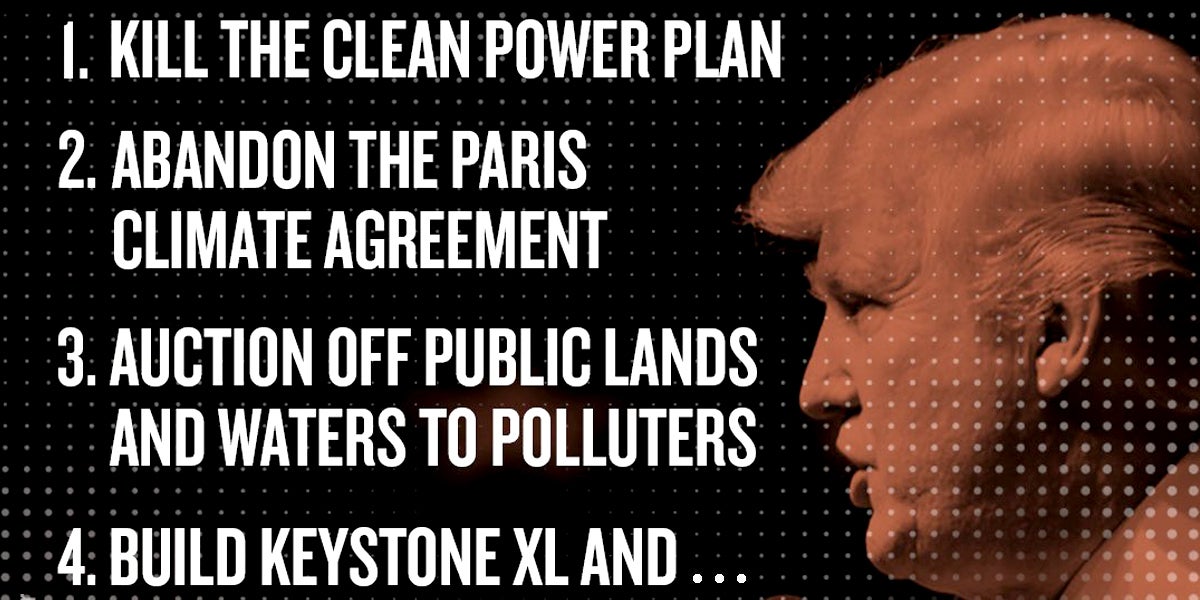 For all the bewilderment and chaos of President Trump’s first month in office, on one point he’s been all too clear: He is dead set on destroying the commonsense safeguards we all depend on to protect our environment and health, crippling our government’s ability to stand up to industrial polluters and shutting down the voice of the people in those actions that most impact our lives.

As early as this week, Trump is expected to escalate this assault with orders that could threaten our waters, public lands and hopes of leaving our children a livable world. He is reportedly poised to direct his administration to rewrite the Clean Power Plan (the single-most important tool we have for cutting the U.S. carbon pollution that’s helping to drive climate change), rewrite the Clean Water Rule (putting at risk wetlands and streams that feed drinking water sources for 117 million Americans) and lift the moratorium on new coal leases on our public lands.

And let’s be just as clear as to who’ll pay the price for this reckless assault on our values and rights: our families, workers, communities and kids. That is not okay.

It’s all according to a plan ripped straight out of the playbook of big oil, coal and gas. And, like so much else we’ve seen from this administration so far, it’s built on the sand of state-sponsored deceit.

Trump claims it’s about jobs. It’s not. It’s about profits for some of the worst polluters on the planet. He says this will strengthen our economy. It won’t. Shifting to cleaner, smarter ways to power our future is the economic play of our lifetime. Trump wants to slam us into reverse and squander our future on the dirty fuels of the past.

And he boasts this will “make America great again.” But taking us back to the days when rivers caught fire, beaches were blackened with toxic crude oil and air pollution darkened our skies is not great.

Less than five weeks after taking office, Trump and his Republican allies in Congress have rushed to set back progress achieved through decades of bipartisan cooperation on clean water and air, the protection of our public lands and coastal waters and our obligation to protect future generations from the dangers of climate change.

Trump has killed rules to protect coal communities and mountain streams from the ravages of mountaintop removal. He’s swept aside the voice of the Standing Rock Sioux and vowed to force the Dakota Access Pipeline across their water sources and sacred lands. And he’s put a career opponent of environmental protections in charge of the U.S. Environmental Protection Agency (EPA).

Former Oklahoma attorney general Scott Pruitt has sided with industrial polluters to take the EPA to court 14 times to try to block the agency from doing its job of protecting the public from polluted air and water and the perils of unchecked climate change.

Pruitt has turned to oil and gas producers to write letters critical of EPA policy that he has then posted, almost verbatim, on official stationery of the Oklahoma office of attorney general. He’s accepted more than $300,000 in direct political contributions from oil and gas companies and organized the collection of millions more from the industry on behalf of conservative causes and candidates. Just last week, an Oklahoma court ordered Pruitt to release up to 3,000 e-mail exchanges he had with fossil fuel and other industrial interests.

Those e-mails will tell us, in Pruitt’s own words, just how ready he is to regulate these polluting industries as head of the EPA. That information goes directly to Pruitt’s fitness to serve and that”s precisely what the Senate has a constitutional duty to assess. That’s what checks and balances are all about.

And yet, on Feb. 17, rather than wait a few days for those e-mails, Senate Republicans, joined by two Democrats from coal-mining states, forced a 52–46 vote to confirm Pruitt. Among Republicans, only Susan Collins of Maine showed the courage to stand up for the people of her state and vote to reject Pruitt, the worst pick ever confirmed to head the EPA.

In so many ways, that says it all. Pruitt is there to serve special interests, not to do the job President Richard Nixon first assigned the EPA nearly five decades ago: Defend the natural resources upon which our prosperity, our security and our very lives depend.

What does Pruitt’s tweet say, though, to that family in coal country, watching ancient Appalachian streams buried by tons of toxic scree when mountains get dynamited to rubble? What does it say to that waterman in the Chesapeake Bay, where Pruitt fought EPA cleanup efforts meant to save dying crabs, oysters and fish? What does it say to that child struggling with asthma, that senior citizen plagued with respiratory ailments or that expectant mom worried about mercury harming her unborn baby—all real problems addressed by EPA rules Pruitt went to court to try and overturn? And what does it say to our children and grandchildren when they ask why we failed to stand up to the mounting dangers of climate change?

The EPA is our environmental guardian. We need that guardian to be strong. We need it to stand up to industrial polluters and fight for the good of our people.

This story, though, is just being written. It’s the beginning, not the end. We still hold, in this country, more political power in the palm of our hand than any other people in any other place at any other time in the history of the world.

We will not abide this reckless assault. We will not lie quiet and calm. We’ll embrace our political power. We’ll rise as one and resist. We’ll gather in numbers, both large and small and, from our living rooms and kitchen tables to the halls of Congress and the National Mall, we’ll sound the voice of a united people standing up for a healthy environment, standing up for our values and rights, standing up for our common future.