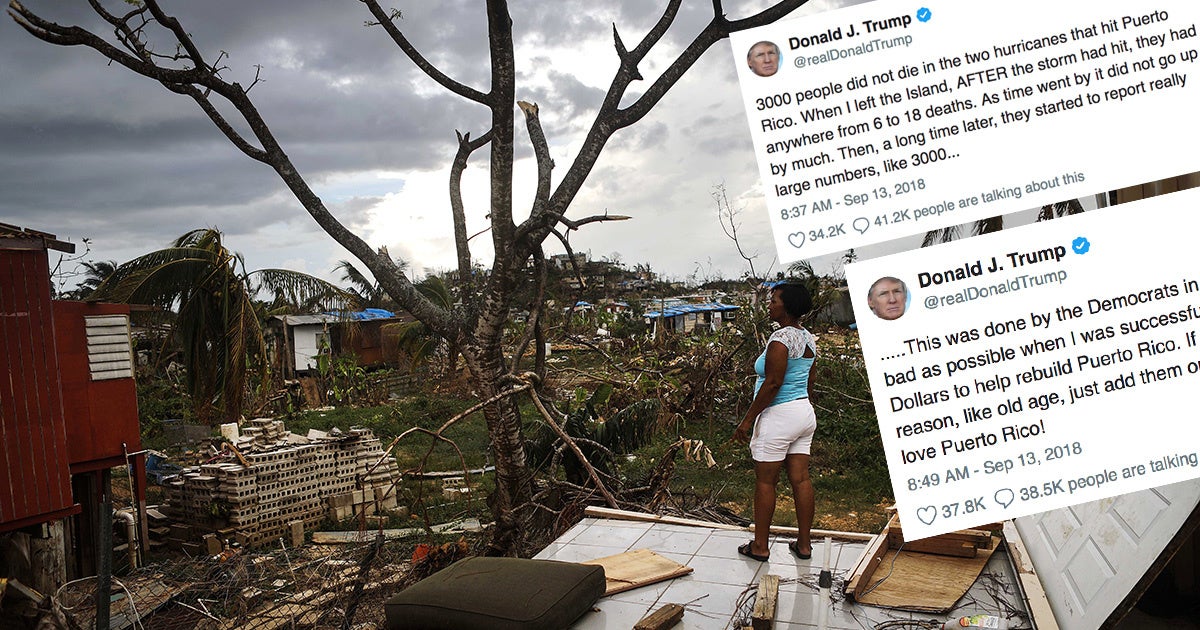 In a stunning tweet on Thursday, Donald Trump refuted reports that nearly 3,000 people died in Puerto Rico during Hurricane Maria in 2017.

“[Three thousand] people did not die in the two hurricanes that hit Puerto Rico,” Trump wrote. “When I left the Island, AFTER the storm had hit, they had anywhere from 6 to 18 deaths. As time went by it did not go up by much. Then, a long time later, they started to report really large numbers, like 3000…”

“….This was done by the Democrats in order to make me look as bad as possible when I was successfully raising Billions of Dollars to help rebuild Puerto Rico,” Trump claimed. “If a person died for any reason, like old age, just add them onto the list. Bad politics. I love Puerto Rico!”

In October 2017, Trump touted the low death toll in Puerto Rico following Hurricane Maria, which at the time consisted of only 16 certified deaths. In August 2018, following a study from George Washington University, Puerto Rico Gov. Ricardo Rosselló revised the official death toll to 2,975.

The internet on Thursday slammed Trump for caring more about his ego than the facts.

Trump is now disputing the death figures in Puerto Rico…by the thousands. This man has to get out of office ASAP.

The president is going to do the Monty Python parrot sketch with Puerto Rico. This isn’t likely to end well. https://t.co/br8HEzXl4z

Is there a word for the 10 minutes after the jaw-dropping tweet that has an ellipsis at the end of it, while you're waiting for/dreading the yet-to-be posted next tweet? https://t.co/rPtN5mlH2C

Also: He appears to be floating a conspiracy that the death toll is being artificially inflated https://t.co/qHX27XWfvm

This should be a comfort to the people who lost family members. Now they know they can blame Thanos or the rapture or anything other than Trump.

Remember kids, the buck stops *scans room looking for someone to blame* THAT GUY! pic.twitter.com/f17fOtrCRs

It's too early for this shit, Donnie.