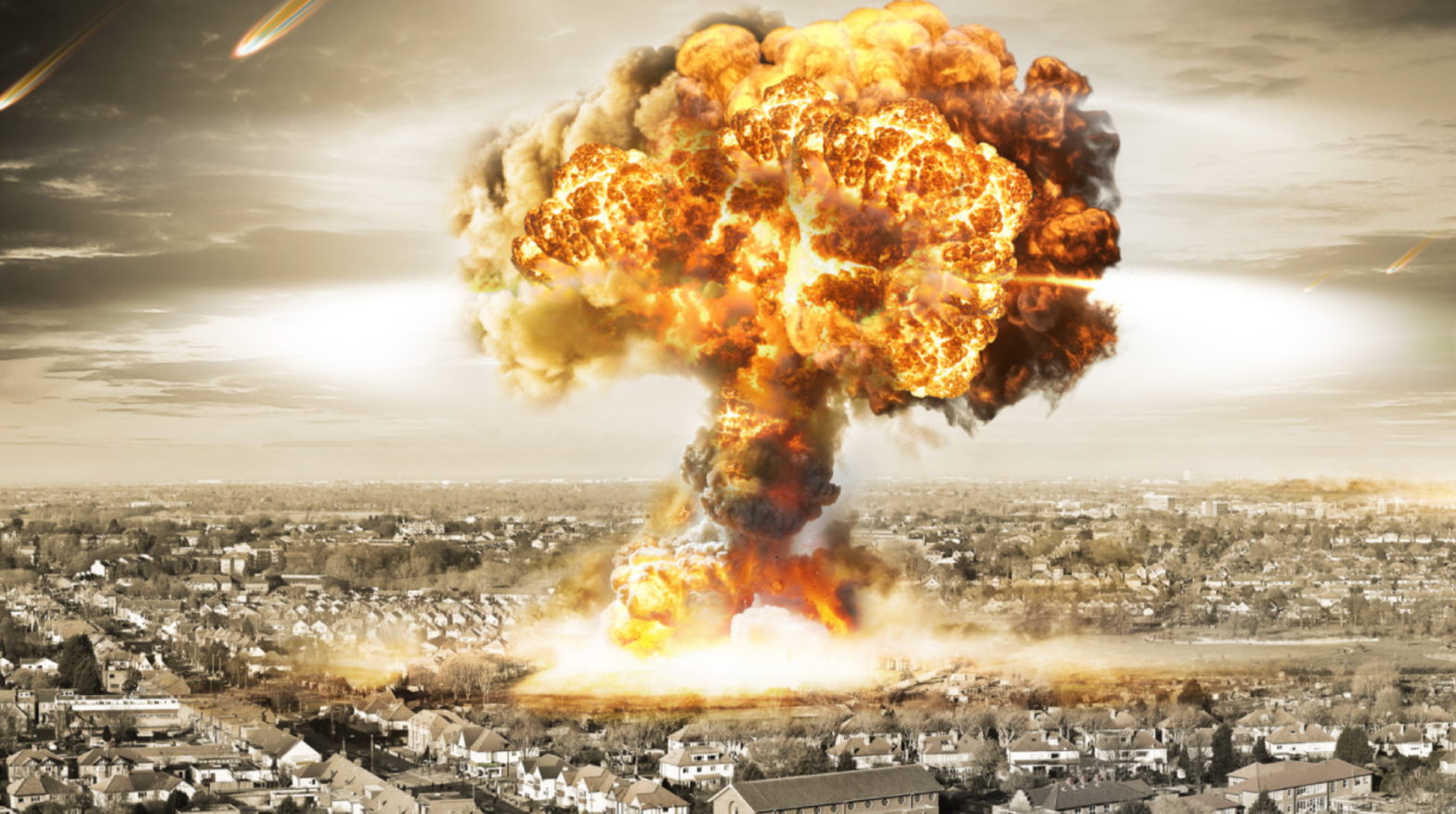 Last winter when President-elect Trump tweeted: “United States must greatly strengthen and expand its nuclear capability until such time as the world comes to its senses regarding nukes,” the tweet was portrayed as shockingly new and threatening. As president, Trump continues his inflammatory rhetoric. Nonetheless, his nuclear posture is closer to his predecessors than is commonly recognized. It has long been U.S. policy and practice to seek and rely on nuclear superiority. The U.S. led every step in the arms race. That arms race remains the greatest immediate threat to the survival of human civilization and other living beings. That threat has persisted under every president from Truman to Trump.

“Khrushchev proposed sharp mutual reductions in offensive weapons. The incoming Kennedy administration considered the offer and rejected it, instead turning to rapid military expansion, even though it was already far in the lead. The late Kenneth Waltz, supported by other strategic analysts with close connections to U.S. intelligence, wrote then that the Kennedy administration ‘undertook the largest strategic and conventional peacetime military build-up the world has yet seen … even as Khrushchev was trying at once to carry through a major reduction in the conventional forces and to follow a strategy of minimum deterrence, and we did so even though the balance of strategic weapons greatly favored the United States.'”

More recently, anti-missile systems have been portrayed as defensive weapons, but this too is deceptive. No nuclear expert seriously thinks that these could withstand a full-scale nuclear exchange. Their deployment might at least plausibly repel the survivors of a first strike against a small-scale nuclear opponent, such as North Korea or Iran.

The irrationality with which Trump is properly charged is also part of the core nuclear doctrine. He is a perfect manifestation of what nuclear strategists have in mind. Chomsky cites a crucial Strategic Air Command study:

“That Stratcom study was concerned with ‘the role of nuclear weapons in the post-cold war era.’ A central conclusion: that the U.S. must maintain the right to launch a first strike, even against non-nuclear states. Furthermore, nuclear weapons must always be at the ready because they ‘cast a shadow over any crisis or conflict.’ They were, that is, constantly being used, just as you’re using a gun if you aim but don’t fire one while robbing a store (a point that Daniel Ellsberg has repeatedly stressed). Stratcom went on to advise that ‘planners should not be too rational about determining … what the opponent values the most.’ Everything should simply be targeted. ‘[It] hurts to portray ourselves as too fully rational and cool-headed … That the U.S. may become irrational and vindictive if its vital interests are attacked should be a part of the national persona we project.’ It is “beneficial [for our strategic posture] if some elements may appear to be potentially ‘out of control,'” thus posing a constant threat of nuclear attack—a severe violation of the UN charter, if anyone cares.”

Nor is such talk merely theoretical speculation. Not only did the Kennedy Administration pour fuel on the fire of the arms race, it practiced nuclear brinksmanship of the most dangerous sort. Here is Chomsky again:

“As the crisis peaked in late October, Kennedy received a secret letter from Khrushchev offering to end it by simultaneous public withdrawal of Russian missiles from Cuba and U.S. Jupiter missiles from Turkey. The latter were obsolete missiles, already ordered withdrawn by the Kennedy administration because they were being replaced by far more lethal Polaris submarines to be stationed in the Mediterranean. Kennedy’s subjective estimate at that moment was that if he refused the Soviet premier’s offer, there was a 33 to 50 percent probability of nuclear war … Kennedy nonetheless refused Khrushchev’s proposal for public withdrawal of the missiles from Cuba and Turkey; only the withdrawal from Cuba could be public, so as to protect the U.S. right to place missiles on Russia’s borders or anywhere else it chose.

It is hard to think of a more horrendous decision in history—and for this, he is still highly praised for his cool courage and statesmanship.” (Popular culture has this story right. The movie Jackie suggests JFK will be remembered for ending a crisis he created.)

In this context we need to question corporate media‘s frequent reference to modernizing nuclear weapons, the presumed sensible alternative to Trump’s bellicosity. Weapons modernization is a euphemism that hides the real agenda, to render such weapons usable in “regional” wars. U.S. strategic rhetoric has always turned on the notion that nuclear superiority deters and that the U.S. must therefore never take the nuclear option—even first strike—off the table. That doctrine is dangerous at its core. How does the U.S. convince an opponent that it is always willing to use nuclear weapons? Eventually only by use of those weapons. (It would also be hard to convince residents of the Marshall Islands that after Japan we have never used such weapons.)

Ironically, President Trump’s frequent nuclear blustering serves to hide one aspect of the nuclear risk. Focus on his instability and possible impetuous resort to the nuclear trigger may distract from equally significant dangers. Any discussion to the threat posed by nuclear weapons should include recounting and further explanation of the multiple accidents with nuclear weaponry as well as the environmental dangers their manufacture and storage pose. In a review of Eric Schlosser’s book on nuclear weapons, Jenny Turner said “the effort to control nuclear weapons—to ensure that one doesn’t go off ‘by accident’ is undermined, over and over again, by demands from the military for bombs they can trust to explode.”

There is a long catalogue of near disastrous accidents with nuclear weapons. Details of an infamous 1961 incident involving the accidental drop of an H-Bomb over Greensboro, NC are especially chilling, especially given President Trump’s decision similarly to arm B-52s today. These details also suggest we should place little reliance on the willingness of top level generals to restrain the president. Here is a summary from the Guardian:

“Further detail on what happened to the Mark 39 bomb when it fell over Goldsboro is given in a newly declassified document written in 1987 reviewing the U.S. nuclear weapon safety programme. It records that as the B-52 broke up, the pin to arm the bomb that was normally manually operated was yanked out as it fell, thus arming it.

All the various stages of the bomb’s fall—the operation of the arming system, deployment of the parachute, timer operation, activation of its batteries, and delivery of the signal that would actually fire the bomb at impact—’all followed as a natural consequence of the bomb falling free.’ Only the lack of engagement of the final ready-safe switch ‘prevented nuclear detonation of this bomb.'”

Despite such expert awareness of the extremely tentative safeguards that stood between America and unthinkable disaster, successive U.S. administrations kept up the line in public that the country’s nuclear arsenal was free from any risk of accidental detonation. This incident, just like the Cuban Missile crisis soon to follow, was just one more case where political and military leaders put the preservation of state power ahead of genuine public safety.

Because they are so dangerous, access to them must be limited, and thus independent investigators cannot accumulate information that could inform a critical assessment of their domestic risks. Secondly, preservation of nuclear secrecy is presented as one aspect of U.S. nuclear superiority. Finally, because they are one of the central pillars in our collective identity as a power second to none, criticism of these weapons is often written off as enemy-inspired and thus illegitimate. Add to this the economic boost nuclear arms provide to key military contractors and one has the makings of an almost invulnerable political machine. As Turner put it, “Nuclear weapons are not like Wikipedia, on which anybody can spot a mistake and write in.”

About the best argument I can think of for the safety of nuclear weaponry is that none has been accidentally detonated so far. From Schlosser’s description, this technological success is in large measure fortuitous. I will state it as a law—complex systems are prone to unpredictable malfunctions. And as with many features of industrial life, there is more glory and economic reward in building the technologies than in maintaining them. Furthermore, in the grand scheme of human civilization, not to say of the planet, 72 years is but a trifle.

Donald Trump’s climate agenda is extraordinarily dangerous, but his posture on nuclear weapons is not as far out of the accepted strategic doctrines as his critics charge. Policy in both domains constitutes an imminent threat to the future of human civilization. Climate denialism has its parallel in those elites expecting to survive nuclear winter. Up until recently climate concerns have largely displaced the issues of nuclear weaponry. That must stop. Movements against nuclear power and nuclear weapons have a long history of facing repressive attacks and mounting cross-border collaboration. Enormous sums are already invested even in the shoddy maintenance of our nuclear arsenal, and many of Trump’s opponents are committed to dangerous modernization of that arsenal. Those funds might better go to meeting the long-term climate crisis. Intensifying climate deterioration risks exacerbating cross border tensions and provoking war, which will surely some day become nuclear. These issues and movements need each other.

John Buell lives in Southwest Harbor, Maine and writes on labor and environmental issues. His most recent book, published by Palgrave in August 2011, is “Politics, Religion, and Culture in an Anxious Age.” He may be reached at jbuell@acadia.net.