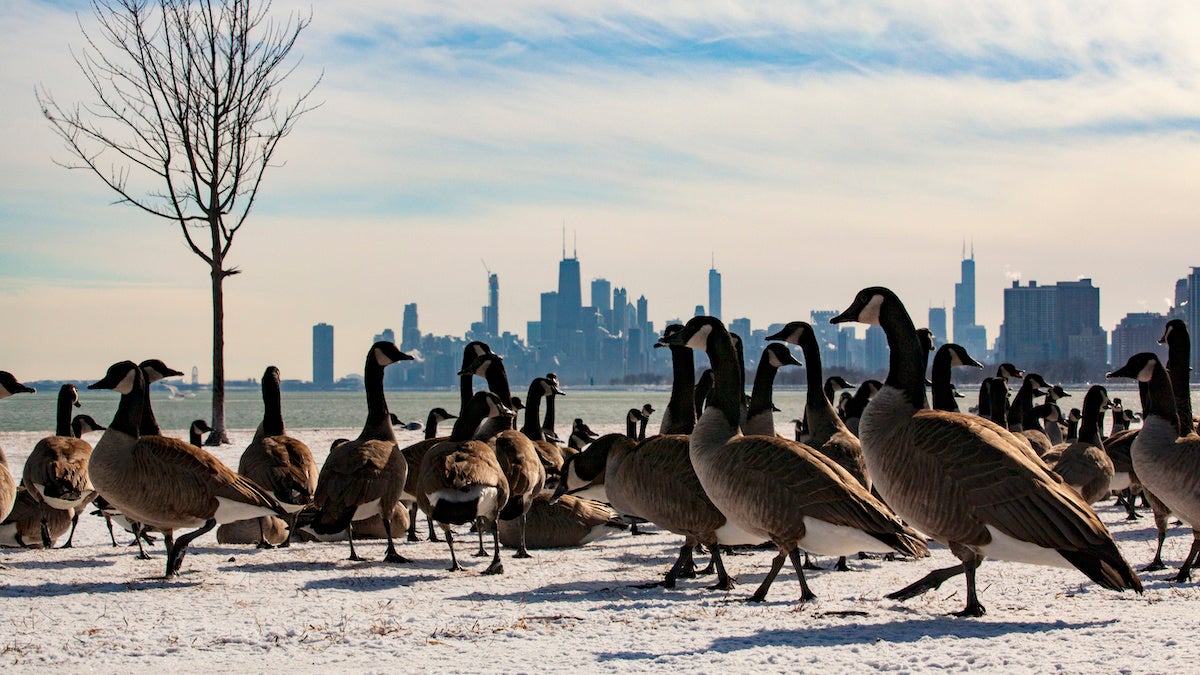 Geese gather at Montrose Harbor, Illinois, with a view of Lake Michigan and the Chicago skyline in the background.
Deanna Kelly / Moment / Getty Images

The new Fish and Wildlife Service (FWS) proposal would mean that fossil fuel companies, developers, power companies and other industries would not be penalized under the Migratory Bird Treaty Act of 1918 for “incidentally” killing birds, The New York Times reported. Only actions that intentionally targeted birds would be prosecuted. The proposal would formalize a 2017 legal opinion that has already led the FWS, which is part of the Department of Interior, to stop investigating the majority of bird deaths.

“The Trump Administration’s Bird Killer Department, formerly known as the Department of the Interior, just gets crueler and more craven every day,” Audubon Society President and CEO David Yarnold said in response. “And today they are doubling down despite the fact that America did not elect this administration to kill birds.”

The Trump administration’s Bird Killer Department—formerly known as the @Interior—just gets crueler and more craven every day. And today they're doubling down despite the fact that America did not elect this administration to kill birds. #ProtectTheBirds https://t.co/5bG4MBgEdT

The Migratory Bird Treaty Act protects more than 1,000 species of birds from being hunted, captured or killed without permits, HuffPost explained. Since the 1970s, the federal government has used it to penalize companies when birds die on their power lines or in their oil pits, according to The New York Times. Conservation groups say the treaty has encouraged companies to take steps to prevent bird deaths, such as installing red lights on communication towers.

But the treaty was limited to focus only on intentional bird deaths in a 2017 legal opinion authored by top Interior Department lawyer Daniel Jorjani, who used to advise the Koch brothers, HuffPost reported.

Documents obtained by The New York Times found that since the opinion was issued, the federal government has largely stopped investigating bird deaths and the administration has dissuaded local governments and businesses from taking steps to protect birds.

But a legal opinion can easily be overturned by another administration, which is why the current one is working to get a new regulation on the books before the November election, senior vice president of conservation programs at Defenders of Wildlife Bob Dreber told The New York Times.

“They’re trying to entrench this as much as they can, and get stuff locked into place,” he said. “We’re going to fight it.”

🚨 Happening now: The Trump administration seeks to cripple the #MigratoryBirdTreatAct! 🚨

Six conservation groups including Defenders of Wildlife and the Audubon Society have sued to stop the legal guidance, as have eight states. Lawsuits will likely be filed to challenge Thursday’s proposal as well, according to HuffPost.

“With a recent study finding there are 3 billion fewer birds in North America than 50 years ago, you’d think we’d want more protection for birds, not less,” Noah Greenwald, endangered species director at the Center for Biological Diversity, said in a statement reported by HuffPost. “This rule violates the trust and will of millions of Americans who love birds and want them around for future generations to enjoy.”

However, U.S. Fish and Wildlife Service Director Aurelia Skipwith maintained in a press call reported by HuffPost that “migratory bird conservation is an integral part” of the agency’s mission and that the proposed regulation was intended to free the agency from “a legal quagmire that doesn’t benefit our conservation objectives.”

She also said it would ensure that “private industry, which are critical to our nation’s economy and overall well-being, can operate without the fear and uncertainty that the unintentional consequences of their actions will be prosecuted.”

But that could mean letting industries off the hook for major environmental disasters, as Alan Zibel, the research director of Public Citizen‘s Corporate Presidency Project, said in a statement emailed to EcoWatch.

“If this rule had been in place at the time of the 2010 Deepwater Horizon spill, which killed more than one million birds, BP would not have had to pay 0 million in fines for violating federal laws that protect birds,” Zibel said.

The new regulation will be posted to the Federal Register Monday, The New York Times explained, after which the public will have 45 days to comment.