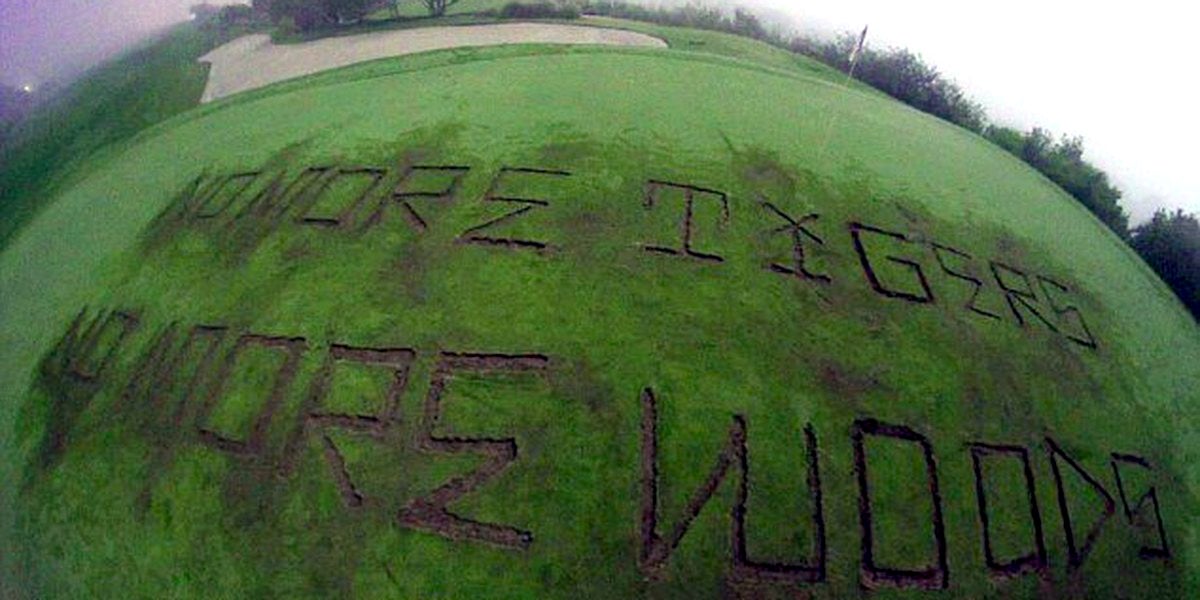 According to
The Washington Post, a group called the “anonymous environmental activist collective” snuck onto the golf course on Sunday morning and even filmed the act. Four individuals are seen in the footage below using gardening tools to etch out the letters.

In a statement to The Post, the group said it carried out the act to protest President Trump’s
anti-environmental agenda.

“In response to the president’s recent decision to gut our existing protection policies, direct action was conceived and executed on the green of his California golf course in the form of a simple message: NO MORE TIGERS. NO MORE WOODS,” the statement said.

The group entered the course by scaling a fence and “walking down a steep hill laced with cacti,” a member explained to The Post.

“Tearing up the golf course felt justified in many ways,” the member said. “Repurposing what was once a beautiful stretch of land into a playground for the privileged is an environmental crime in its own right.”

“We hope this sends a message to Trump and his corrupt administration that their actions will be met with action,” the member added.

Neither the golf course nor the White House has responded to the incident yet. However, Donald Trump’s son, Eric, sent out a tweet earlier today calling the matter a “criminal” act.

He also criticized The Post’s earlier version of its story which initially praised the group’s actions as “a daring act of defiance.” The article has since been amended to say “an elaborate act of vandalism.”

Incidentally, Bloomberg reported earlier this month that the president’s U.S.-based golf courses would stand to benefit from his recent executive order to dismantle federal water regulations, once again highlighting the administration’s conflicts of interests.

As Bloomberg explained, the directive “not only coincides with his conservative agenda but also could cut his costs as an owner of a dozen U.S. golf courses.”

The Obama administration’s 2015 Waters of the U.S. rule protects smaller creeks and wetlands from pollution and development under the Clean Water Act. Water features on golf courses are also included in the rule.

Trump’s order to reconsider the rule was strongly supported by the golfing industry as the water rule forces golf course owners to pay costly fines for pollution violations.

“I would say this is a very high priority to us,” Bob Helland, head lobbyist for the 17,000 member Golf Course Superintendents Association of America, told Bloomberg. “We are pleased to see that there is an effort to revisit the rule under this executive order.”