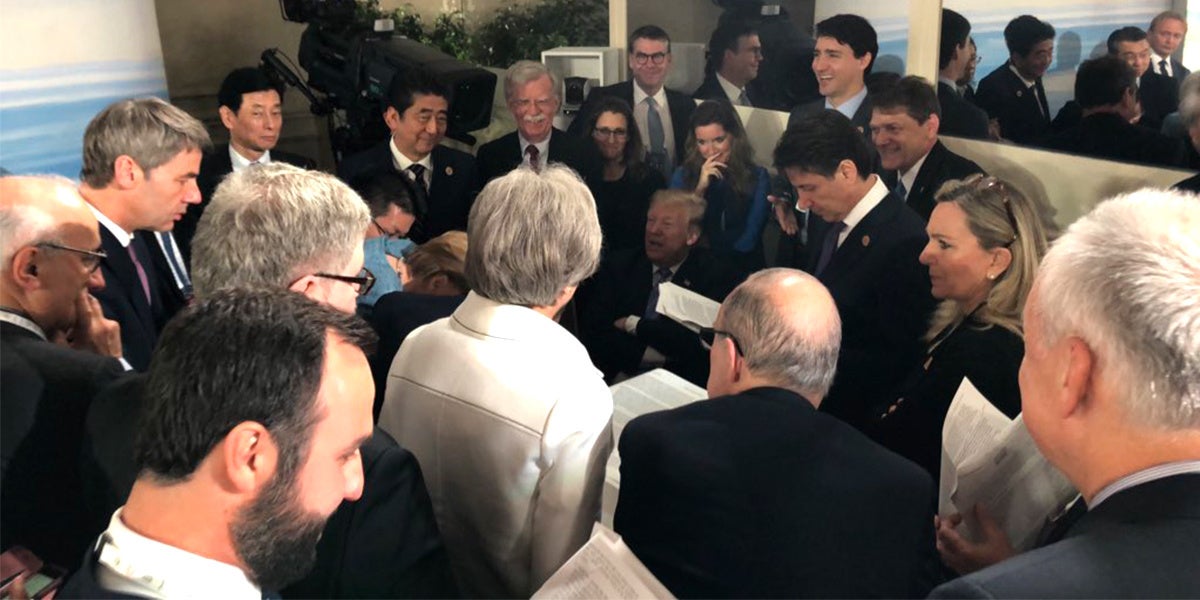 Negotiations between Trump and the rest of the G7 leaders. Dan Scavino Jr. / Wikimedia Commons

After declining to attend the Group of Seven (G7) meeting on climate change, clean energy and oceans Saturday, President Donald Trump pulled out of the summit’s official communique, which saw the other countries renew their commitments to the Paris agreement, Inside Climate News reported Sunday.

The communique, which summarized the meeting of major world democracies in Charlevoix, Quebec June 8 and 9, had already included separate statements from the U.S. and the rest of the participants. Canada, France, Germany, Japan, Italy, the United Kingdom and the European Union all recommitted to the Paris agreement. Canada, France, Germany, Italy, the UK and the EU all also endorsed the G7 Ocean Plastics Charter, which sets goals towards reducing the use of unnecessary plastics and improving recycling. The U.S., meanwhile, wrote a statement focusing on the importance of “affordable and reliable energy resources.”

But despite already diverging from the rest of the group on environmental issues, Trump announced via Tweet on Saturday that he had instructed U.S. representatives not to endorse the communique at all after he was angered by remarks made by Canadian Prime Minister Justin Trudeau at a press conference.

Trump’s most vocal disagreement with Trudeau and other world leaders focused on trade, not climate. The week before the summit, Trump had placed tariffs on steel and aluminum imports from Canada, the EU and Mexico and at the summit said he would end trade with countries whose policies with the U.S. he deemed unfair, The Guardian reported.

In the press conference that prompted Trump’s tweet, Trudeau had said he would not approve a change to the North American Free Trade Agreement (NAFTA) sought by Trump that would allow a member country to leave the agreement after five years, according to The Guardian.

The other G7 nations stood by the communique.

“Let’s be serious and worthy of our people,” the French presidency said in a statement quoted by AFP. and reported by Inside Climate News. “International co-operation cannot be dictated by fits of anger and throwaway remarks.”

“President Trump’s wrecking ball approach to international diplomacy left him utterly isolated at the G7 summit. Leaders from the other six countries didn’t even try to paper over their strong disagreements with Trump on trade, climate change and other important issues. On climate change, they made clear their determination to meet their national commitments under the Paris Agreement, and to continue efforts to decarbonize the global economy,” Union of Concerned Scientists director of strategy and policy Alden Meyer said in a statement about the summit reported by Inside Climate News.

“As communities across the U.S. confront the costly and harmful impacts of climate change, it’s these leaders—not President Trump—who are acting in the true economic, environmental and national security interests of the American people,” Meyer concluded.

These other leaders promised, in a more comprehensive climate statement than 2017’s, to reduce water pollution, air pollution and greenhouse gas emissions to achieve a carbon-neutral economy in the second half of the 21st century. They also pledged to work with local governments, indigenous communities, impacted coastal or island nations and the private sector to meet their climate goals.

The summit coincided with World Oceans Day and Saturday’s March for the Ocean, so it was fitting that G7 leaders also endorsed the Charlevoix Blueprint for Healthy Oceans, Seas and Resilient Coastal Communities, which calls for promoting oceans research, improving the sustainability of fisheries, helping coastal communities be resilient to climate change and reducing marine litter.

Every G7 nation besides the U.S. and Japan endorsed the G7 Ocean Plastics Charter, which sets specific goals of working with industry towards 100 percent reusable or recoverable plastics by 2030 and recycling 55 percent of plastic packaging by 2030 and 100 percent by 2040, among others.