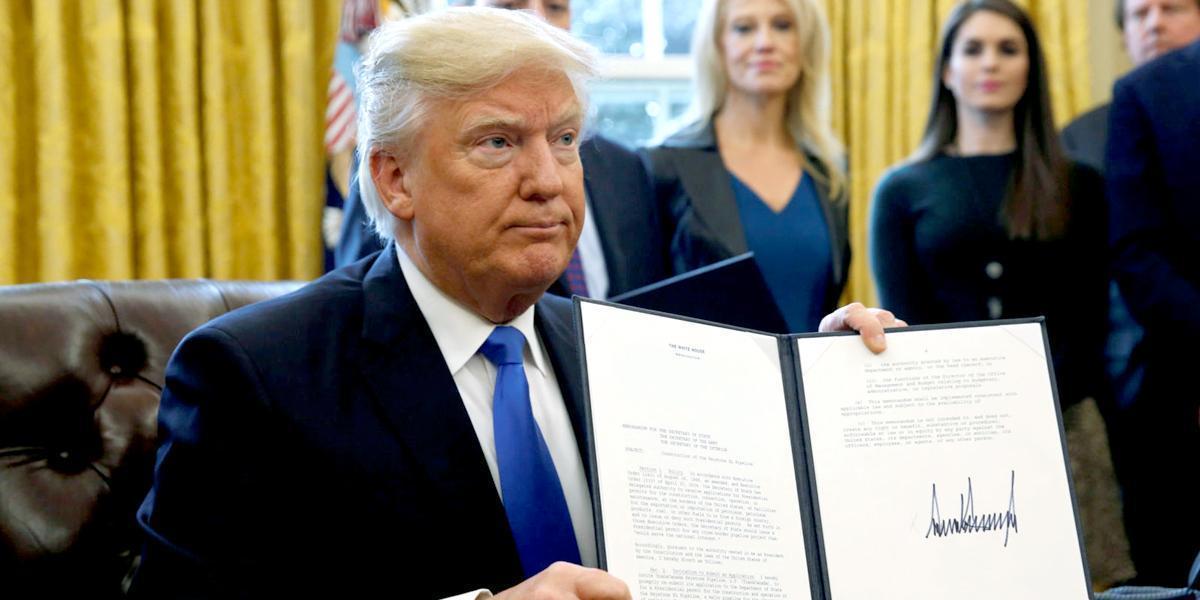 Like any arbitrary benchmark, the 100-day point of a new president’s term normally tells us only so much about what’s to come. In the case of President Trump‘s all-out assault on our environment and health, however, we’ve already seen more than enough.

In his first three months on the job, Trump has acted again and again to undo half a century of bipartisan progress in protecting our rights to clean water, air and lands. He’s moved to part ways with longstanding American values of conservation in the public interest. And he’s betrayed the covenant we’ve forged with our children to leave them a livable world.

That’s not a plan to put America first. It’s about putting industrial polluter profits first―and putting the rest of us at risk.

Presidents don’t get to roll back generations of hard-won gains with the stroke of a pen. Working with his fellow Republicans in Congress, Trump has already killed rules to protect coal communities from mountaintop demolition that destroys forests and streams. And he may expose more public lands to the ravages of coal mining.

Much of what he’s ordered, though, can be halted, slowed or turned back around―in the court of public opinion or in a court of law. To do that, we’ll have to stand together and give real voice to truth against a president intent on using the full powers of his high office to try to eliminate the tools we need to protect our families and communities from ongoing harm.

From his first week in office, Trump and congressional Republicans have attacked the commonsense safeguards we all depend on to protect the water we drink, the air we breathe, the lands that grow our food and the wild places we share. He’s put the U.S. Environmental Protection Agency under the thumb of Scott Pruitt, an avowed foe of the agency’s mission, while proposing to gut the EPA budget and staff.

He’s taken on the very notion of responsible public oversight with an unlawful and baseless order to scrap two existing regulations for every new one put in place―as though we can cope with emerging threats only if we pretend the old ones no longer exist.

And he’s sounded an ignominious retreat from the essential progress we’re making in the fight against global climate change.

Any one of these tacks would be cause for national alarm and public rebuke. Taken as a whole, the Trump broadside attack on the nation’s environment and health demands the united and concerted opposition of every American, from red state and blue, who cares about our common future.

Whatever our political leanings, we all should be shocked at this radical campaign to roll back environmental safeguards, abandon important national goals and hobble our environmental steward, the EPA. Trump’s reckless attempts to do just that run wildly at odds with the will of the people, as a raft of recent polling proves.

A solid 61 percent of the country disapproves of Trump’s big polluter agenda, an April poll by Quinnipiac University found. Just 19 percent want the EPA weakened or eliminated, according to a January Reuters poll, with 61 percent saying the agency should be strengthened, expanded or kept at its current strength. Trump, though, has proposed slashing the agency’s budget by 31 percent, taking it back to 1990 funding levels and cutting staff by 20 percent.

In one policy area after another, in fact, the disparity between Trump’s actions and public opinion is striking:

Trump has directed the EPA to weaken or eliminate standards to clean up the cars and dirty power plants that together account for 60 percent of the U.S. carbon pollution that’s driving global climate change. That’s a stone-cold loser in the public mind. Drivers like saving billions of dollars a year at the pump, and an April poll by Quinnipiac found that 76 percent of the public is “somewhat concerned” or “very concerned” about climate change, with 62 percent saying Trump should not backtrack on standards and rules put in place to fight it.

A hundred days into Trump’s presidency, we’ve already seen more than enough. It’s time to gather as one and speak out against his senseless campaign to turn back the clock on 50 years of environmental gains and stanch the promise of more progress to come.

On Saturday, April 29, I’ll travel, along with thousands of others, to Washington, DC, to march with the People’s Climate Movement. I hope you’ll join us, in the nation’s capital or in any of dozens of sister marches across the country, to show Trump just how far out of step his policies are with the will of the people he serves.