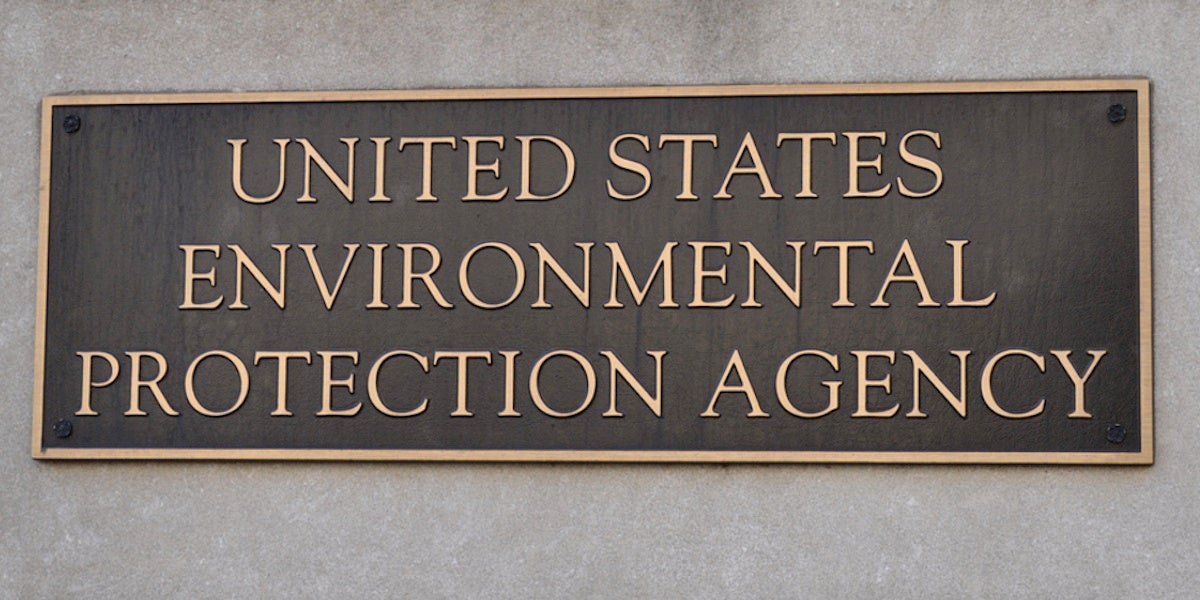 From
Scott Pruitt to Betsy DeVos, President Donald Trump has notoriously appointed a slew of individuals with serious conflicts of interests with the departments they oversee.

The latest is
Michael L. Dourson, Trump’s pick to head the EPA’s Office of Chemical Safety and Pollution Prevention, the government’s chemical safety program. Media reports reveal that the toxicologist is under intense scrutiny for his extensive ties to the chemical industry and a resumé dotted with some of the biggest names in the field: Koch Industries Inc., Chevron Corp., Dow AgroSciences, DuPont and Monsanto.

After working as a staff toxicologist for the EPA from 1980 to 1994, Dourson founded and ran the
Toxicology Excellence for Risk Assessment (TERA), a nonprofit research group that has been paid by chemical corporations to research and write reports that downplay the health risks posed by their products, the New York Times reports. TERA has since been renamed as the Risk Science Center at the University of Cincinnati, where Dourson is a professor.

According to the Associated Press, Dourson’s research has been “underwritten by industry trade and lobbying groups representing the makers of plastics, pesticides, processed foods and cigarettes.”

Dourson’s Senate confirmation hearing was originally set for Wednesday but has been postponed to a date that has not yet been announced. If confirmed, Dourson would be in charge of regulating chemicals produced by “his old industry friends,”
critics have warned.

Notably, Dourson and TERA was contracted by Dow AgroSciences, the maker of chlorpyrifos, a neurotoxic pesticide that has been shown to harm children’s brains at even very low exposure levels. Dourson and his researchers argued in three papers that there were flaws in peer-reviewed studies that linked delays in fetal development from chlorpyrifos exposure, the AP reports.

In March, the EPA controversially refused to ban chlorpyrifos claiming the science is “unresolved” and decided it would postpone the determination of the pesticide until 2022.

Dourson was also the lead author of a
report funded by Koch Industries that concluded that human exposures to petroleum coke and coal “if any, are well below levels that could be anticipated to produce adverse health effects in the general population.”

Senator Tom Carper (D-DE), the ranking minority member of the Senate Committee on Environment and Public Works panel that will evaluate Dourson’s qualifications was alarmed by Trump’s choice.

“Dr. Dourson’s consistent endorsement of chemical safety standards that not only match industry’s views, but are also significantly less protective than E.P.A. and other regulators have recommended, raises serious doubts about his ability to lead those efforts,” Carper told the Times. “This is the first time anyone with such clear and extensive ties to the chemical industry has been picked to regulate that industry.”

A number of experts and environmental and consumer health groups have also spoken against Dourson. The Environmental Defense Fund has listed a number of further objections, including:

“It is not even subtle,” Sheldon Krimsky, a Tufts University professor who studies ethics in science and medicine and has reviewed Dourson’s work, told the AP. “He has chosen to be the voice of the chemical industry. His role as a scientist is simply the role of an industry-hired lawyer—only to give the best case for their client.”

Unsurprisingly, the chemical industry and trade associations have cheered the choice.

“We welcome Dr. Dourson’s nomination,” CropLife America
said on its website. “His extensive experience in risk assessment and science, both in government and private sector make him a valuable addition to the office.”