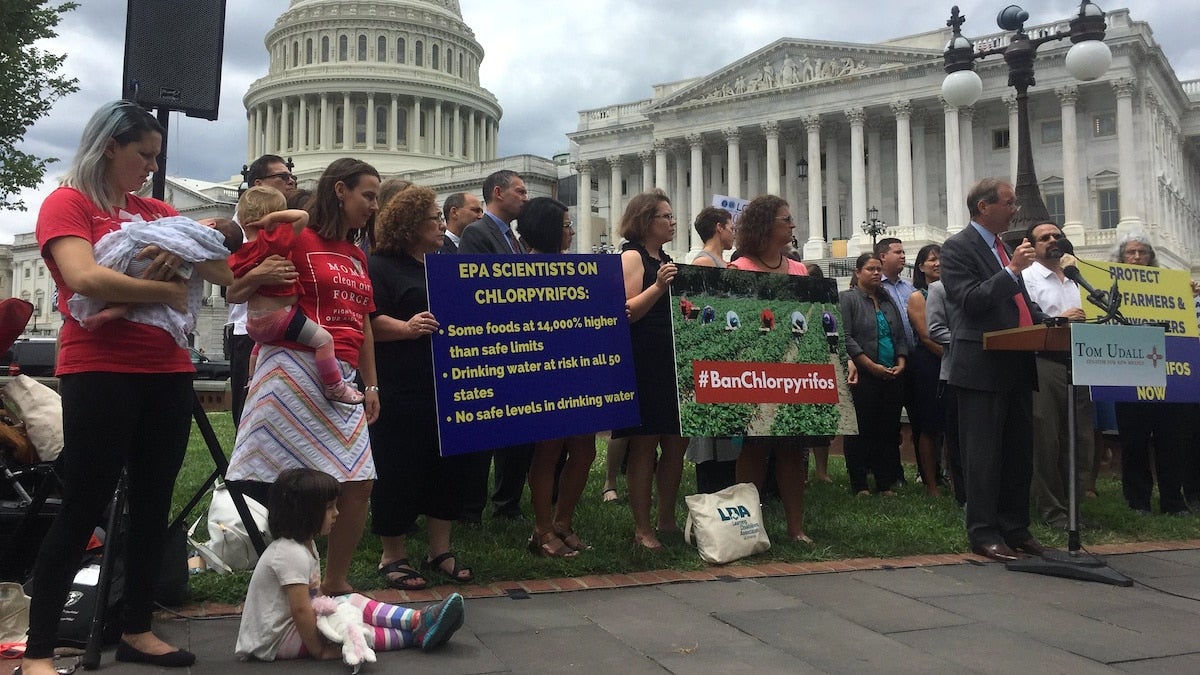 The Trump administration’s Environmental Protection Agency (EPA) released a risk assessment for toxic pesticide chlorpyrifos Tuesday that downplayed its effects on children’s brains and may be the first indication of how the administration’s “secret science” policy could impact public health.

Several studies have found that babies exposed to chlorpyrifos in the womb can suffer from lower birth weights, attention deficit disorder, autism spectrum disorder, lower IQ and limited working memory, Earthjustice pointed out. But the EPA on Tuesday discounted those findings, ruling instead that the science on chlorpyrifos’ brain-damaging effects “remains unresolved.” In doing so, it reversed the findings of EPA scientists from previous administrations.

“This shows that E.P.A. has completely abandoned any commitment to protecting children from this extremely toxic chemical when their own scientists recommended twice to ban it,” Natural Resources Defense Council senior director for health Erik D. Olson told The New York Times. “The science is being overridden by politics.”

In Tuesday’s conclusion, the EPA discounted several epidemiological studies, including a prominent one conducted by Columbia University that found a connection between chlorpyrifos exposure in utero and developmental disorders in toddlers. This suggests the agency is moving forward with its proposed “secret science” policy that would reject or at least give less weight to the conclusions of studies that do not make their underlying data public. However, several long-term health studies do not publish such data in order to preserve their subjects’ privacy. The “secret science” policy has not yet been made an official EPA rule, but the agency already seems to be applying it in the case of the chlorpyrifos assessment. EPA spokesperson James Hewitt said the agency had not been able to confirm the conclusions of the Columbia study.

“The EPA is ignoring decades of science by leading universities and in doing so, it’s neglecting its duty to protect children from pesticides,” Earthjustice managing attorney Patti Goldman said in a statement. “Ignoring the demonstrated harm to children doesn’t make chlorpyrifos safe, it just shows a commitment to keep a toxic pesticide in the market and in our food at all cost.”

EPA scientists sounded the alarm on chlorpyrifos in 2014 and 2016, recommending it be banned from use on food, according to The Hill. (It was already banned for household use in 2000). But in 2017, the EPA under Trump halted the process of banning the chemical. This triggered a round of lawsuits, leading eventually to Tuesday’s risk assessment.

“They kicked the decision back to scientists and said they’re reanalyzing it so that’s how they got around the courts telling them to decide whether to ban it or not,” Center for Biological Diversity senior scientist Nathan Donley told The Hill.

He said Tuesday’s assessment suggests it is unlikely that the agency will ultimately decide to ban the pesticide.

Meanwhile, states including California and Hawaii have taken matters into their own hands and banned the chemical. Corteva, the pesticide’s No. 1 maker, has said it will stop producing it by the end of 2020, according to The New York Times. Despite this, Earthjustice pointed to EPA documents showing that Corteva has been lobbying the agency.