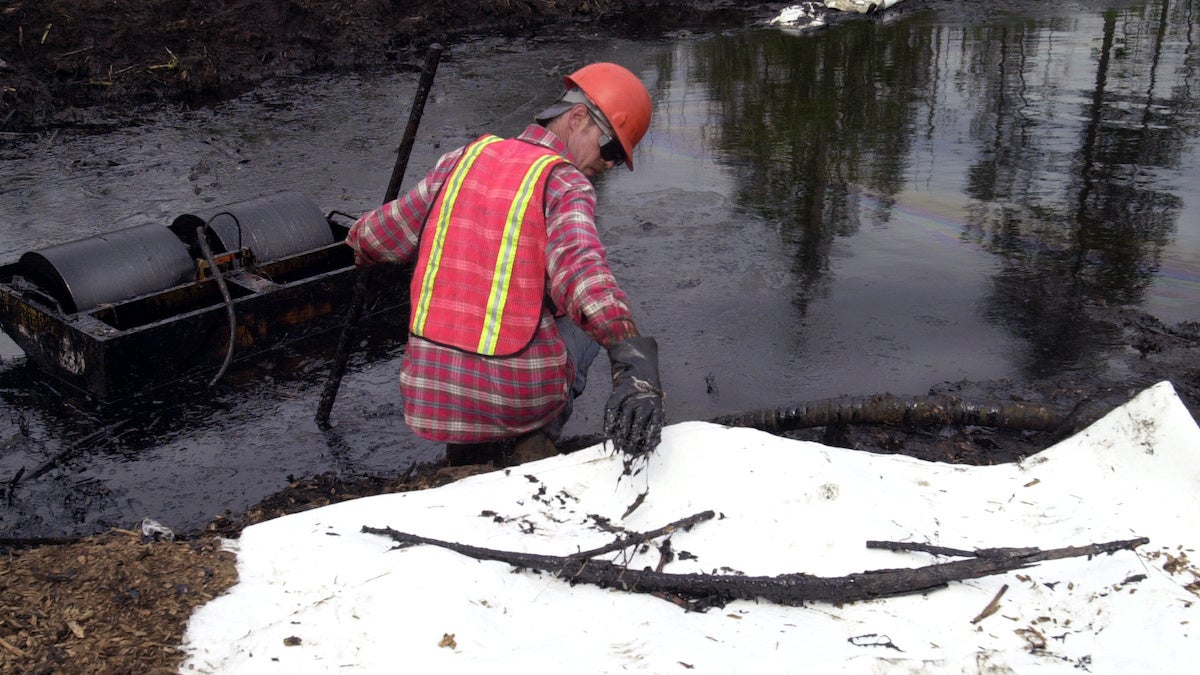 Workers clean up a crude oil leak from a pipeline in Minnesota in 2002. JOEY MCLEISTER / Star Tribune via Getty Images

The Trump administration has finalized a rule making it harder for states and tribal communities to block pipelines and other infrastructure projects that threaten waterways.

The change concerns Section 401 of the Clean Water Act, which essentially gives states and tribes veto power over projects that would hurt their water quality, The Hill explained. The changes, announced by the Environmental Protection Agency (EPA) Monday, give states and tribes a one-year deadline for reviewing projects and narrow the scope of what they can consider to only water issues, The New York Times reported. They may no longer block projects because they would contribute to the climate crisis.

“This is a dangerous mistake,” director of federal water policy at the Natural Resources Defense Council (NRDC) Jon Devine said in a statement. “It makes a mockery of this EPA’s claimed respect for ‘cooperative federalism.'”

In recent years, states have used Section 401 to block a number of high profile fossil fuels projects, The Washington Post reported. Last month, New York and New Jersey blocked permits for the Northeast Supply Enhancement Pipeline, which would have carried fracked natural gas from Pennsylvania through both states. New York also blocked the Constitution pipeline that would have also moved gas from Pennsylvania. And Washington state blocked a 0 million coal export facility in 2017.

Climate activists have seen Section 401 as a useful tool for keeping fossil fuels in the ground, NPR explained. But industry groups and the Trump administration have accused states of abusing their veto powers, and President Donald Trump issued an executive order in April 2019 mandating federal agencies ease the completion of energy infrastructure projects, according to The Washington Post.

“Today, we are following through on President Trump’s Executive Order to curb abuses of the Clean Water Act that have held our nation’s energy infrastructure projects hostage, and to put in place clear guidelines that finally give these projects a path forward,” EPA Administrator and former coal lobbyist Andrew Wheeler said in a statement reported by The Hill.

“We hope that EPA’s action today will help end the abuse of the section 401 permitting process, which has been used to obstruct projects for reasons that had nothing to do with protecting water quality,” National Mining Association President and CEO Rich Nolan told NPR.

Lawyer, former EPA employee and Clean Water Act expert Mark Ryan told The Hill that the changes were a major departure that would put states at a disadvantage.

“This changes the balance of power that has existed over the last 40 years from the states to the applicants,” he said.

He explained that applicants would be incentivized to run down the clock on states by withholding information. However, he also thought it was unlikely the changes would hold up in court.

“The new rule will be very vulnerable to a legal challenge; the EPA will have a very hard time convincing the Supreme Court that its current interpretation of the Clean Water Act is correct,” he said in a statement emailed to EcoWatch.

And a legal challenge looks likely.

“We won’t stand idly by as they rip away our authority under the law to preserve water quality,” California Attorney General Xavier Becerra, whose state has sued the Trump administration 82 times, said in a statement reported by The Washington Post.